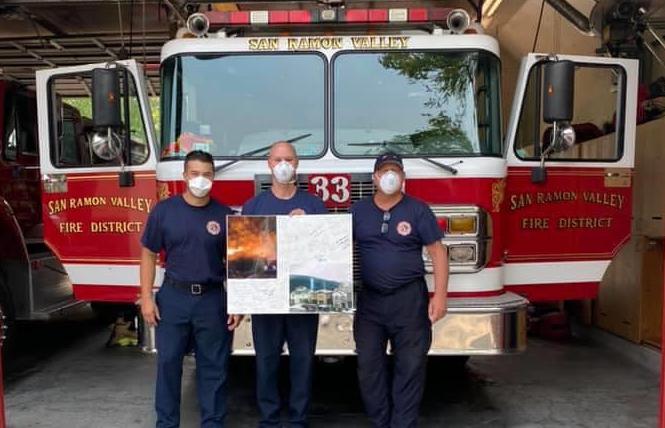 Fire crews were beginning to gain ground on several enormous wildfires raging around the Bay Area this week, though air quality continued to be dangerously unhealthy throughout the region.

Recent lightning storms triggered hundreds of fires that are affecting communities across the state. These include the Walbridge fire and the Meyers fire in Sonoma County, which are both part of the LNU Lightning Complex fires that are impacting cities across the North Bay in several counties as far north as Lake County.

At a virtual news conference Monday afternoon, Cal Fire Division Chief Ben Nichols said crews were gaining ground on the Walbridge Fire and the Meyers Fire, which is almost contained. As of Wednesday morning, the fire had burned 357,046 acres and was 33% contained.

"There was no significant growth throughout the day on the Meyers or Walbridge fires," Nichols said. The weather is not expected to change in the next couple of days, "allowing us to work in the areas with the most significant threats."

When asked to give a "rough estimate" of when people in the lower Russian river communities, such as Rio Nido, can return to their homes, Nichols said it's "overzealous to say in the next day or so" and said he'd be surprised if it was faster than five days.

Joining Nichols was Congressman Jared Huffman (D-San Rafael), who noted, "We are at a point where we are turning a corner."

In Fairfield, Jonathan Cook and his family received the order to evacuate mid-afternoon last Wednesday, August 19, after the south boundary of the LNU Lightning Complex's Hennessey Fire jumped Highway 80 in Vacaville and headed toward their neighborhood of Paradise Valley.

"Before we were evacuated we were already deciding to leave. We could see the flames on the other side of the freeway," said Cook, a gay man who is executive director of the Solano Pride Center. "Fortunately, we got out before there was that big traffic jam on the freeway."

He and his parents used a backroads route to head up to his sister's house in Sacramento to spend the night. They were able to return home the next morning, as firefighters from Contra Costa County saved their and their neighbors' homes as well as a nearby livestock ranch.

"The fire burned right down the hill behind our housing development," said Cook, adding that a staffer of the center and his husband, and a female board member and her wife all evacuated as well. "Over the weekend we were a little worried. The fire is still critical in north Vacaville. We are worried about friends and community members who live there."

The LGBTQ center staff has been checking in with clients, especially seniors, to make sure they are doing OK and have necessary supplies and plans in place if they need to flee the fire. With the air quality at hazardous levels due to the fire smoke, Cook said he inquired about getting N-95 face masks to hand out to people but has been unable to acquire any at the moment.

"It is pretty bad, the air quality. Basically, it is unhealthy for people to be outside," said Cook. "We are having to wear N-95 masks everywhere we go. We are staying indoors as much as possible."

Dr. Sundari R. Mase, Sonoma County's interim health officer, said that the evacuations and poor air quality are likely to contribute to the spread of COVID-19.

"Unlike previous fires, we have the added threat of COVID in mind," Mase said. "The most effective masks [for fires] are those you've seen in the past with the front valve. ... Alone these do not protect against COVID-19."

An N-95 mask without an opening for expelling air is the best way to protect against COVID-19, Mase said, and that a mask with an opening for breathing out is more likely to spread the virus. 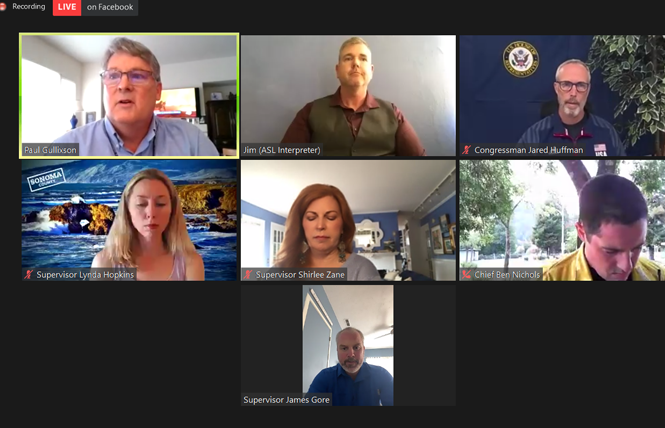 "It's been wild times. I think things are starting to get a little bit ... a sense of maybe taking of a deep breath, so to speak here, after the red flag warning was lifted," said Kayla Kumar, a queer candidate for Santa Cruz City Council this fall. "There is a sense for folks it is still pretty bad but not about to get worse, which was the messaging we were receiving up until Sunday."

For the past six years she has lived near the Pogonip forest and open space right by the UC Santa Cruz campus. While the university and parts of her neighborhood were ordered evacuated, Kumar was only told to be ready to leave at a moment's notice.

"I talked to people who have lived here a long time and ashes raining down from the sky is new. There was about maybe a quarter of an inch of soot on my car," said Kumar, who works for a local food nonprofit. "I can understand why the public was in fear. It felt extreme."

In Santa Cruz, at least eight people accused of looting have been arrested. Juan Valencia, a spokesman for the Sonoma County Sheriff's Office, said that one person was arrested for attempting to enter an evacuation zone in the North Bay.

"Right now people are feeling anxious and scared," Valencia said. "This is our third major fire in three years — we understand — but take care of yourself, your family, and your neighbors."

Donations sought
Cal Fire Chief Sean Kavanaugh thanked the public for wanting to donate to Cal Fire, but said that donations should be made to their local American Red Cross or nonprofits instead.

Cook suggested people donate to the Solano County LGBTQ center via its website at https://www.solanopride.org/donate to help it purchase disaster supplies it can hand out to its clients. He also suggested the Food Bank of Contra Costa and Solano — https://www.foodbankccs.org/ — and the Solano Community Foundation — http://www.solanocf.org/

"I have a lot of concern right now for the folks who been evacuated," said Kumar, who has been assisting with the relief efforts. "So many people I know who lost their houses, their life savings are just gone, and of course all the people who are homeless getting evacuated."

Huffman directed his constituents who need any sort of federal help to his website (https://huffman.house.gov/helping-you/help-with-a-federal-agency).

Sonoma County District 5 Supervisor Lynda Hopkins, who represents the LGBTQ vacation destination Guerneville and other Russian River communities, urged people to financially support small businesses in the evacuation zone when people are allowed once again to return. They had already been struggling due to COVID-19 and from the floods last winter.

"I'm so damn proud of West [Sonoma] County," she said. "We have shown such determination in the midst of such significant challenges."