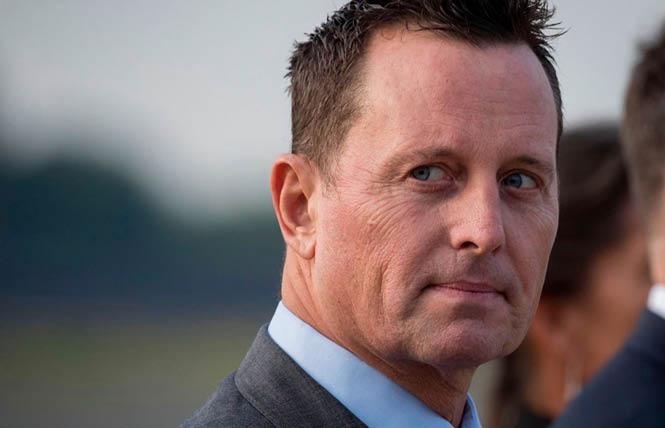 The 2020 Republican National Convention begins Monday (August 24) with plans to formalize President Donald Trump as the party nominee for reelection, but little else is known about how, exactly, the event will play out.

The Republican Party's plans, released Sunday, include one out gay speaker as part of the program. According to the schedule, former Ambassador to Germany Richard Grenell, who also served briefly as acting director of national intelligence, will speak Wednesday evening. A video of Grenell posted on a gay Republican website last week gives a glimpse at what his convention speech will likely be about — an out of context attack on Democratic nominee Joe Biden's early career positions against equal rights for gays and a picture of Trump as a champion of LGBT equality.

Meanwhile, reports have been varied about how many days Trump will speak to the convention, with some suggesting he may address delegates all four days. The latest plan calls for him to deliver his acceptance of the nomination Thursday from the White House.

About 2,500 delegates and alternatives have been selected, but only 336 are being allowed to participate on site in Charlotte, North Carolina, on Monday because of the novel coronavirus pandemic. That is when a roll call on the nomination is slated. The Charlotte Observer reported that most of the delegates are expected to leave the city after the roll call.

Log Cabin Republicans, the national LGBTQ Republican group, endorsed Trump for reelection last August, an action that prompted the resignation of its executive director, Jerry Ann Henry. It announced its decision in an op-ed in the Washington Post, with board President Robert Kabel and Vice Chair Jill Homan as authors.

"While we do not agree with every policy or platform position presented by the White House or the Republican Party," stated the op-ed, "we share a commitment to individual responsibility, personal freedom and a strong national defense. ... We are committed to letting all qualified Americans serve in the military, and Log Cabin Republicans was a leader in the legal fight to end the 'Don't Ask, Don't Tell' policy. We oppose the transgender service restriction and will continue to press the administration to reconsider.

"To be treated equally, fairly, and justly under the law is our goal, and we know that 'Inclusion Wins' is a mantra we share with the president," concluded the essay.

In June of this year, the coronavirus pandemic prompted the Republican Party to forego a meeting of its platform committee and adhere, instead, to the platform it adopted in 2016. On Monday, the party announced it was sticking with the 2016 document, even though it's outdated, and added a statement of support for Trump's agenda.

The 2016 platform prompted Log Cabin Republicans to place a full-page ad in USA Today at the time, calling it the "most anti-LGBT platform in the Republican Party's 162-year history."

In an August 20 video for getoutspoken.com, Grenell tells viewers, "President Trump is the most pro-gay president in American history." He says he is "America's first openly gay cabinet member." (Some historians will point out that his two-month post as acting national intelligence director was a "cabinet level" post, not specifically a post in the cabinet.) Grenell says Biden, as U.S. senator, said gays would be a security risk, opposed marriage for same-sex couples, and voted for 'Don't Ask, Don't Tell.'"

"Grenell manages to both significantly mislead about Biden's record and oversell Trump's," Post fact checker Glenn Kessler writes. "Biden's positions evolved over the years, but often he was ahead of the general public or other politicians in recognizing gay rights or seeking to thwart discrimination against gay people. Grenell pretends comments from a half-century ago are relevant today."

In 2012 as vice president, Biden came out for marriage equality ahead of President Barack Obama and many other Democrats.

"Donald Trump is the first president in American history to be pro-gay marriage from his first day in office," says Grenell in the video.

Broadcast of the Republican National Convention begins each night, Monday through Thursday, beginning at 6 p.m. (Pacific Time). Like the Democratic convention last week, the Republican convention will be broadcast and livestreamed on various networks and social media platforms.