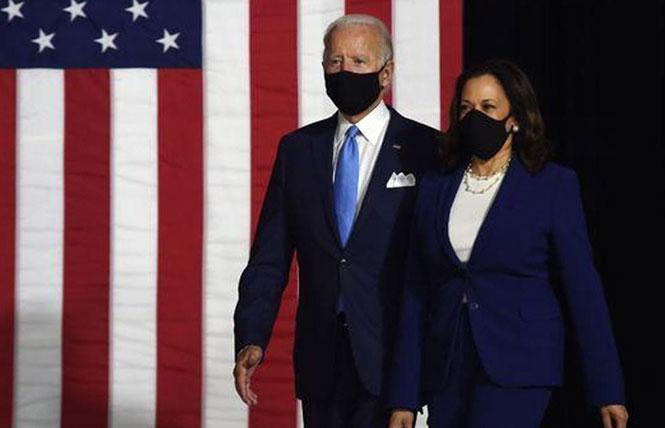 It's become cliché to characterize each presidential election as "the most important" of our lifetime, or of this generation. But only now, facing the possibility of four more years of unrestrained racism and authoritarianism by an emboldened President Donald Trump, does that phrase ring true. This country can't survive another term of the most corrupt, unhinged president ever. In contrast, even Richard Nixon appears decent by opting to resign as president when the walls closed in on his illegal Watergate activities. Trump doesn't care about anyone not named Trump, and even that is debatable.

Trump campaigned in 2016 to "drain the swamp," but the cesspool of greed, illegality, and self-dealing at the expense of American taxpayers and the working class has only grown deeper and murkier. Trump must be stopped, so it is imperative that Joe Biden and Kamala Harris are elected overwhelmingly as the next president and vice president.

Biden, who will formally accept the Democratic Party's nomination Thursday in the first-ever virtual convention, due to the novel coronavirus pandemic, gave his campaign a boost last week when he selected California's junior senator as his running mate. Harris is the first Black woman to be on a major party presidential ticket, and the first South Asian American of any gender. She has a compelling life story and, more importantly, her selection as the vice presidential nominee has excited Black voters around the country.

LGBTQ voters are energized too. Harris fought for marriage equality in California and also helped get rid of the gay and trans panic defense often used by perpetrators of violence against queers, especially trans murder victims. On a Zoom meeting that the Biden for President campaign organized for LGBTQ+ women last week, several speakers noted how important it was to see someone who looks like them on the ticket. "It makes a tremendous difference for young women," said Andrea Jenkins, a Black transgender woman who sits on the Minneapolis City Council. "I think Kamala would make an amazing vice president and leader for all women."

Biden, too, is a fighter for equality — notably he was ahead of many in the party, including then-President Barack Obama, in publicly embracing same-sex marriage. After decades in the U.S. Senate and eight years a vice president, he knows how Congress operates, which is an advantage for achieving his goals for our country. He said last week that his top priority is growing jobs for the unprecedented number of Americans left suddenly unemployed by the effects of COVID-19.

During the opening night of the convention Monday, Senator Bernie Sanders (I-Vermont), the runner-up in the Democratic primaries, made a forceful pitch for Biden. "At its most basic, this election is about preserving our democracy," he said. "During this president's term, the unthinkable has become normal. He has tried to prevent people from voting, undermined the U.S. Postal Service, deployed the military and federal agents against peaceful protesters, threatened to delay the election and suggested that he will not leave office if he loses. This is not normal, and we must never treat it like it is."

"But, let us be clear, if Donald Trump is re-elected, all the progress we have made will be in jeopardy," Sanders said after thanking his supporters.

A Biden-Harris administration would immediately get to work restoring myriad policies, rules, and programs the Trump administration has rescinded. Many affect LGBTQ rights, such as changes to the Affordable Care Act, education guidance for trans students, and the trans military ban. The new administration would rejoin the Paris climate accord, and re-engage cooperatively with our international partners. Most significantly, Biden would nominate federal judges, including those to the U.S. Supreme Court, who are qualified and inclined to seek equal rights for everyone. Biden would sign the Equality Act, should it pass Congress and reach his desk.

On COVID-19, Biden and Harris have already said that there should be a nationwide mask mandate. A Biden administration would be led by science, not quacks who peddle ineffective "cures" for the virus. The end to this pandemic is not within sight; the damaged economy can't wait for that far off day and needs immediate federal support, especially for small businesses.

Trump's blatant attempt to suppress the vote by starving the postal service of funding is just the most recent example of his propensity to cheat to win — in this case re-election. He knows that there is little evidence of voter fraud from mail-in ballots — he's requested one himself — but the truth is that he wants to sow confusion and suppress voting, especially in minority communities and battleground states.

This fall, when early voting begins in California and other states, we all need to vote for Biden and Harris. Trump has proved himself unfit for office. As Sanders said Monday, the price of another four years "is just too great to imagine."