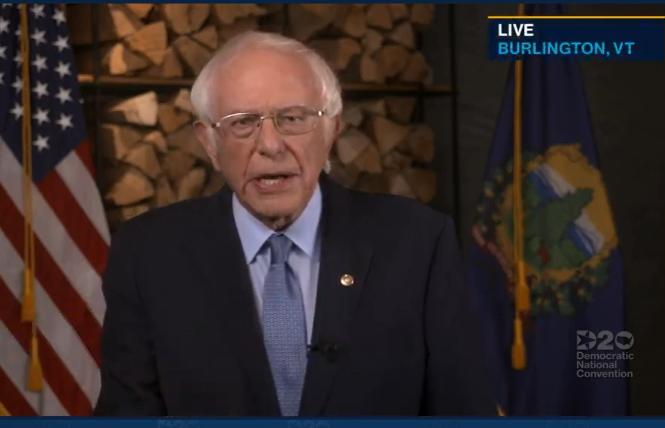 Vermont Senator Bernie Sanders delivered a powerful speech at Monday's opening of the virtual Democratic National Convention, laying out the reasons why voters should reject another four years of President Donald Trump.

"Nero fiddled while Rome burned; Trump golfs," Sanders said. "His actions fanned this pandemic resulting in over 170,000 deaths and a nation still unprepared to protect its people."

He was followed by former first lady Michelle Obama's dynamic takedown of the president, in which she said that "Donald Trump is the wrong president for our country."

"He has had more than enough time to prove that he can do the job, but he is clearly in over his head," Obama said. "He cannot meet this moment. He simply cannot be who we need him to be for us. It is what it is."

The first session of the 2020 Democratic National Convention was gaveled into order Monday night, but there were no crowds of eager politicos to hush.

The quadrennial gathering of the nation's Democrats to nominate a presidential and vice presidential nominee occurred via computer and TV screens, like so many other events this year, due to the COVID-19 pandemic.

And COVID was a prominent topic of discussion during the two hours of televised coverage, which was capped by speeches from Sanders (I-Vermont) and Obama.

Sanders, a democratic socialist who was the runner-up to presumptive nominee former vice president Joe Biden, urged his supporters and others who did not vote for Biden in the Democratic Party primaries to do so in November.

"Even before Trump's negligent response to this pandemic, too many hard-working families have been caught on an economic treadmill with no hope of ever getting ahead. Together we must build a nation that is more equitable, more compassionate and more inclusive," Sanders said. "I know that Joe Biden will begin that fight on day one."

Sanders touted the changes that he and his supporters have pushed for, both this year and during his previous run in 2016, in the Democratic Party's platform — including support for raising the federal minimum wage to $15 per hour, 12 weeks of paid family leave, universal pre-K, and greater access to health insurance.

"As you know, we are the only industrialized nation not to guarantee health care for all people," Sanders said. "While Joe and I disagree on the best path to get to universal coverage, he has a plan that will greatly expand health care and cut the cost of prescription drugs. Further, he will lower the eligibility age of Medicare from 65 to 60."

It was a more robust speech in support of the Democratic nominee than he gave four years ago when Hillary Clinton was running for president.

Sanders contrasted this with the potential that Trump will remain in office for four more years.

"The price of failure is just too great to imagine," he said, arguing that "under this administration authoritarianism has taken root in our country."

"I, and my family, and many of yours, know the insidious way authoritarianism destroys democracy, decency, and humanity," Sanders, who is Jewish and who lost family members in the Holocaust, said.

"This election is the most important in the modern history of this country," Sanders said. "In response to the unprecedented crises we face, we need an unprecedented response — a movement, like never before, of people who are prepared to stand up and fight for democracy and decency — and against greed, oligarchy, and bigotry."

Sanders was followed by Obama, who offered her most forceful words yet against Trump.

"Whenever we look to this White House for some leadership or consolation or any semblance of steadiness, what we get instead is chaos, division, and a total and utter lack of empathy," she said. "Empathy: that's something I've been thinking a lot about lately. The ability to walk in someone else's shoes; the recognition that someone else's experience has value, too. Most of us practice this without a second thought. If we see someone suffering or struggling, we don't stand in judgment. We reach out because, 'There, but for the grace of God, go I.' It is not a hard concept to grasp. It's what we teach our children."

Obama said that the example the president has set is evidently causing young people to "[wonder] if we've been lying to them this whole time about who we are and what we truly value."

"They see our leaders labeling fellow citizens enemies of the state while emboldening torch-bearing white supremacists. They watch in horror as children are torn from their families and thrown into cages, and pepper spray and rubber bullets are used on peaceful protestors for a photo-op," she said. "Sadly, this is the America that is on display for the next generation. A nation that's underperforming not simply on matters of policy but on matters of character. And that's not just disappointing; it's downright infuriating, because I know the goodness and the grace that is out there in households and neighborhoods all across this nation.

"If we have any hope of ending this chaos, we have got to vote for Joe Biden like our lives depend on it," the former first lady added.

Obama then praised Biden, who was vice president for eight years under her husband, Barack, and who she said has the empathy Trump lacks.

"I know Joe. He is a profoundly decent man, guided by faith," she said. "His life is a testament to getting back up, and he is going to channel that same grit and passion to pick us all up, to help us heal and guide us forward."

Race, COVID emerge as prominent themes
Earlier in the night, family members of George Floyd — whose killing by Minneapolis police in May set off nationwide protests for racial justice and against police violence — introduced a moment of silence.

"My brother George was selfless and always made sacrifices for his family, his friends, and even complete strangers," Philonise Floyd said, before adding that the protests are "a fitting legacy for our brother, for George should be alive today."

Congressman Jim Clyburn (D-South Carolina), whose support for Biden in the South Carolina primary earlier this year was crucial for resuscitating his less-than-stellar showings in Iowa and New Hampshire, encouraged people to support Biden, saying he meets the national moment.

"We need a president who both understands profound loss and what it takes to bounce back," Clyburn said. "That's why I stand with Joe, and why he'll always be an adopted son of South Carolina. We know Joe, but more importantly, Joe knows us."

The convention shifted back to the ongoing COVID-19 outbreak. New York Governor Andrew Cuomo (D) said that his state's success, relative to other states, in controlling the spread of the novel coronavirus, stands in contrast to what he said was a lack of federal leadership.

"New York was ground zero for the COVID virus and we went from one of the highest infection rates in the world to one of the lowest," Cuomo said, before thanking the 30,000 volunteers to help the state in its beleaguered months of March, April, and May. Cuomo went on to compare the virus to the Trump presidency.

"In many ways, COVID is a metaphor," Cuomo said. "Donald Trump didn't create the [political] divisions, but the divisions created Trump and Trump made it worse."

Cuomo, who is from Queens, same borough of New York City as Trump, said he has had a working relationship with Biden and knows him to be "America tough."

"Tough in the best way," he said. "Tough that is smart, united, disciplined and loving. ... We need a leader who is as good as our people."

Cuomo was followed by Kristin Urquiza, whose father Mark was a 65-year-old Trump supporter before succumbing to COVID-19 some months ago.

"The coronavirus has made it clear that there are two Americas — the America that Donald Trump lives in and the one that my father died in. Donald Trump may not have caused the coronavirus, but his dishonesty and irresponsible actions made it so much worse."

"His only preexisting condition was trusting Donald Trump, and for that he paid with his life," she said.

A series of Republicans — including 2010 California Republican gubernatorial nominee Meg Whitman — expressed their support for Biden in taped messages. Their remarks introduced former Ohio Governor John Kasich (R), who ran against Trump in the 2016 GOP primaries.

Kasich delivered his remarks from a road with a fork in it to illustrate his metaphor about where America is in 2020.

"The stakes in this election are greater than any in modern times. Many of us have been deeply concerned about the current path we've been following for the past four years," Kasich said. "It's a path that's led to division, dysfunction, irresponsibility, and growing vitriol between our citizens. Continuing to follow that path will have terrible consequences for America's soul because we're being taken down the wrong road by a president who has pitted one against the other."

Kasich said that while he disagrees with much of Biden's and Democratic policy ideas, the 2020 presidential election is "not normal times."

"I'm proud of my Republican heritage. The party of Lincoln who reflected its founding principles of unity and a higher purpose. What I have witnessed over these four years belies the principles," Kasich said. "I've known Joe Biden for 30 years. I know his story of profound grief that is so deeply affected his character joins a good man. A man of faith. A unifier. Someone who understands the hopes and dreams of the common man in the common woman. A man who can help us to see the humanity in each other. ... He knows the path to a restored America lies in respect and unity and common purpose for everyone. There are areas we disagree. That's okay. That's America. Whatever our differences we respect one another as human beings."

Minnesota Senator Amy Klobuchar (D), who ran against Biden in the 2020 Democratic primaries, spoke before Sanders. She joked — in the characteristic Midwestern fashion that became a staple of last year's primary debates — that "the president may hate the post office, but he's still going to have to send them a change-of-address card come January."

Numerous speakers addressed concerns that the president is manipulating the United States Postal Service in order to interfere with ballots being cast through the mail. These speakers included Obama, who insisted people vote in person if possible.

After Obama's speech, gay entertainer Billy Porter sang a duet cover version of "For What It's Worth" with Stephen Stills.

The Democratic convention was adjourned by Congressman Bennie Thompson (D-Mississippi), this year's convention chair, until tomorrow evening after a benediction from the Rev. Dr. Jerry Young, president of the National Baptist Convention. The national anthem had been sung by a multicultural virtual choir representing all 50 states, the District of Columbia, the Cheyenne nation and five U.S. territories.

Tuesday's convention session will feature the roll call of the states, when delegates will formally choose the party's presidential nominee.