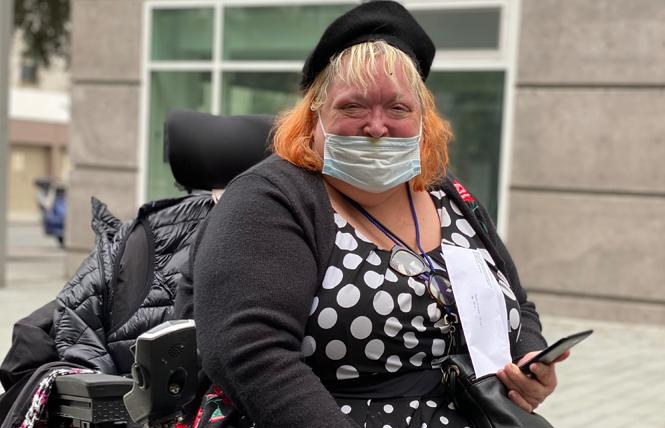 A disabled bisexual woman who is a resident of 95 Laguna Street is seeking mediation with Mercy Housing following a series of injuries she said she sustained after moving to the San Francisco affordable housing complex geared toward LGBTQ seniors.

Christina Giles told the Bay Area Reporter that in the time since she moved into her apartment in the summer of 2019, she has been found unresponsive in her room due to high temperatures and once required intubation; has had her ventilator cut off because of overloaded electrical circuits; had an accident that caused a large amount of blood loss; and that reasonable accommodations were not made for her wide wheelchair.

Giles has given several written statements and interviews to the B.A.R., one of which was a sit-down interview July 13. At that time she signed a release authorizing Mercy Housing and her case manager, who works for Openhouse, which partnered with Mercy on the senior housing complex but does not manage it, to speak with the paper regarding her issues with her apartment.

Three hospitalizations
Giles, 63, said she has been a San Francisco resident since childhood.

She said she has been a stand-up comic and for a time was a "minister who would travel around the world to marry people at their destination weddings."

She said she had lived in a rent-controlled unit in the Pacific Heights neighborhood for several decades but moved to get away from what she described as an abusive roommate situation.

Giles said she began living at 95 Laguna Street in August 2019. In a letter she said she sent to Mercy dated October 25, 2019, she stated that she did not see the apartment before she signed the lease.

"I was told it was the 'very last one,'" Giles wrote. "I felt forced to sign the lease."

Because of excess carbon dioxide in her body, Giles has to be on a ventilator, but the wattage of the electrical outlets in her apartment were not enough to keep the ventilator up and running, she said.

This, coupled with what Giles described as lack of air circulation in her apartment, led to at least three hospitalizations in the first several months of her lease, Giles said in a July 28 phone interview with the B.A.R. One of those times she had to be intubated.

"It was determined the entire wattage output of my equipment by each of the manufacturers was not going to cause a problem, when in fact your building has too-sensitive outlets that blew the circuit again and again," Giles stated in a letter to Mercy Housing that she gave to the B.A.R.

After that last hospitalization, Mercy agreed that Giles should have an extension cord for her ventilator and oxygen, she said.

Giles said that her wheelchair does not fit in many of the doors of her apartment, which has resulted in the left armrest being damaged when Giles goes in and out of rooms. (This reporter found the wheelchair to be so damaged.)

"The company [is] responsible for my injuries," Giles wrote in a July 22 email to the B.A.R., her case manager, and the San Francisco Human Rights Commission, referring to Mercy. "My $35,000 wheelchair is broken in more than one place and it's brand new."

But the incident that left Giles the most shaken occurred in February, when she said she had an accident in her apartment that caused a loss of almost one-half a gallon of blood and alleged a Mercy official advised that she shouldn't be helped due to potential legal liabilities.

Giles' extension cord had gotten tangled in her wheelchair: "It was a perfect storm," she said in the July 28 phone interview.

"In February, the cord got caught in my wheelchair and a gash that barely missed my artery. 1,500 cc of blood loss, and by the time I was about to faint from blood loss, I made it downstairs," Giles wrote in a July 7 email to the B.A.R. "Down in the lobby, this young man picked up the phone, not to call 911 but to call [Mercy senior property manager at 95 Laguna] Karen [Zhou], who told him not to have ANYONE touch me because MERCY HOUSING could be liable if they did. Give me a break. Pools of blood and me in my chair asking for a [tourniquet.] Finally a butch dyke said 'fuck it,' grabbed some paper towels, and applied pressure till paramedics came."

Giles received 15 stitches at the emergency room and returned home, she said.

Despite the release Giles signed, Mercy only issued a brief statement.

"Mercy Housing is working with its partner, Openhouse, at 95 Laguna, and Christina Giles' case manager, to address her concerns," Rick Sprague, Mercy regional vice president, wrote in a July 27 email to the B.A.R. "Our core values of respect, justice, and mercy define that the well-being, health and safety of the nearly 20,000 residents — families, seniors and individuals with special needs — who reside at one of the 148 affordable housing communities in California, owned and managed by Mercy Housing California, are our highest priority."

After the B.A.R. contacted Giles' case manager, who is an employee of Openhouse, agency Executive Director Karyn Skultety, Ph.D., emailed the paper July 15 stating that press inquiries should go through her. Skultety issued a brief statement at that time.

"Openhouse provides case management, services, and advocacy to LGBTQ seniors, including residents of our building and those across the Bay Area, to ensure their needs are met," Skultety wrote. "We have been and will continue to work closely with our partners at Mercy to address concerns and continue to advocate for LGBTQ seniors."

Mediation delayed
Giles said July 13 that she wanted to move into a different apartment on the property that could better accommodate her needs.

She requested to see a specific unit and received a letter from Mercy Housing posted on her door. The letter, dated July 21, states, "We cannot give you access to this unit or any other requested unit in the building at this time. You have a reasonable accommodation request for a transfer which is still in process, and which will be answered in due course."

Upset by what she saw as a stonewalling tactic, Giles sent a follow-up email to Zhou the next day.

"I do not understand," Giles wrote. "What does 'for transfer' mean? What does 'still in process' mean? Most confusing is 'which will be answered in due course.'"

Giles said that she hoped mediation will allow her to move to a different apartment in the complex and that Mercy Housing will make adjustments for her wheelchair.

Giles has reached out to SF HRC to facilitate mediation.

According to a July 13 HRC email obtained by the B.A.R. "Mercy has requested mediation by the SF Bar Association Conflict Intervention Service" and HRC planned to reach out to that organization the same week "to set something up."

In a phone call July 15, Marilyn L. Flores, an investigator/mediator with HRC, confirmed to the B.A.R. that she had spoken with Giles but said, "as a rule I don't comment on the substance of any open matters before me. We are trying to help them clarify and resolve. ... It's up to the parties to decide and agree upon who will conduct the mediation."

But Giles said on the July 28 phone call that HRC told her July 24 that it could not conduct mediation yet because Mercy indicated it was willing to work with her.

"HRC is not going to move forward with mediation unless Mercy Housing after a short amount of time — they were very vague — would not comply," Giles said.

Giles said she was asked to contact the San Francisco Department of Building Inspection. Now, she isn't certain what she wants out of mediation.

"I'm not sure what the answer is but my knee-jerk reaction is to get out of Mercy Housing and go back to fair-market value housing where I can be left alone," she said. "If that's not an option, I'll be forced to live here. I don't know where I want to live."