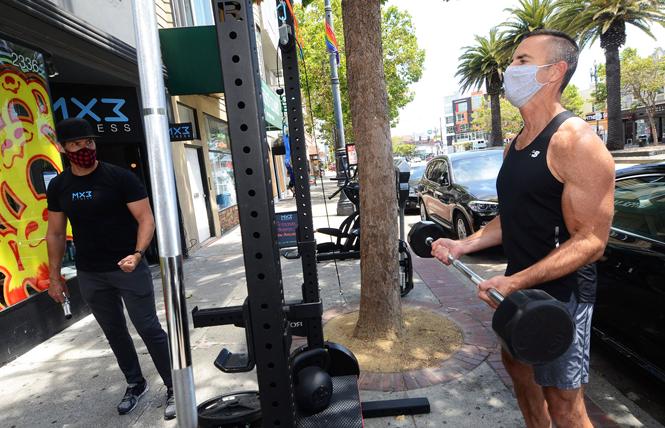 Since shelter-in-place orders imposed in mid-March caused her to close her gym location in Oakland, The Queer Gym owner Nathalie Huerta and her employees have continued to offer their training programs virtually. Fortuitously, the lesbian-owned business had launched its virtual programming last year and was able to quickly move all of its clients online.

Huerta sent each client a COVID-19 care package containing a T-shirt, a bundle of sage for "good vibes," a candle, and a lacrosse ball so they could stretch and do mobility work at home. She had already seen a precipitous drop in clients by doing away with in-person bootcamps for online coaching, going from 250 people down to 68 in March.

She has since increased the client base up to 150 people through online promotions and social media mentions not only in the Bay Area and Los Angeles County but also up in Portland and Seattle. Still, with revenue way below where her business was at the start of 2020, Huerta has decided not to renew the lease for her gym's physical location when it comes up for renegotiation in August.

"In 2021 or later I'll look at reopening physical locations," said Huerta, who launched the business in 2011 under the name The Perfect Sidekick. "I think gyms going forward are either going to be 100% online or offer a hybrid of online and in-person."

She sees the pandemic wrought by the novel coronavirus as the fitness industry's "Netflix moment," causing upheavals over the next six months similar to what the entertainment industry experienced at the advent of online streaming services. Already, the 24 Hour Fitness chain has filed for bankruptcy and closed 100 locations, including in San Francisco's Castro and Noe Valley neighborhoods.

Husbands Dave Karraker and Glenn Shope, the owners of MX3 Fitness on upper Market Street in the LGBTQ Castro district, also were forced to shut down March 17 due to the shelter-in-place orders. Within 48 hours they moved their entire business online, offering virtual one-on-one fitness training and yoga classes for the first time to their clients.

"Glenn is a former computer programmer, so he was able to build the backend system to allow it to happen pretty quickly," said Karraker. "Our trainers weren't trained in how to teach online, so it was a big shock to all of our employees. They had to figure out how to train somebody using equipment they had in their house and giving them the same quality workout they got in the gym."

Nonetheless, they have lost 85% of their business and have no plans to open their second floor yoga space anytime soon.

"Personal training is exactly that, personal," noted Karraker. "The inability of us to meet face-to-face with people was a real barrier for people making the move online. Add to it their lack of having the right equipment at home."

Last week, they started holding fitness trainings with clients out on the sidewalk in front of their business. Both the client and the trainer must wear masks at all times, while clients are required to do a health check at home and have their temperature checked again when they arrive at the business for their session.

"We will be sanitizing all the equipment between each client," said Karraker.

Unlike Huerta, they have no plans to give up their physical location and are in negotiations with their landlord about their lease agreement going forward. They hope to negotiate a reduced rent, as even when they are allowed to resume indoor operations, they will be doing so in a limited capacity in order to adhere to health guidelines for physical distancing.

"We would tape off areas within the gym that allow for six foot distance between clients and trainers," explained Karraker.

Reopening uncertain
Just when city leaders and health officials will allow fitness studios to reopen remains uncertain. Currently, such businesses are grouped with other indoor activities set to resume operations in August at the earliest.

In May, 40 locally-owned personal training businesses joined forces to form the San Francisco Independent Fitness Studio Coalition to advocate as one unified voice with city leaders. They would like to be considered essential businesses, since they are helping people remain healthy, and be allowed to resume operations along with such places as nail salons, barbershops, and zoos.

Those businesses had been expected to reopen beginning June 29, but those plans were shelved indefinitely last Friday amid a statewide spike in new coronavirus cases and hospitalizations. During a media call conducted via Zoom Tuesday, San Francisco Health Officer Dr. Tomás Aragón said local officials wouldn't decide on when the next group of businesses would be allowed to reopen until after the Fourth of July holiday.

"If things get better, we will start to consider opening up early next week," Aragón told reporters. "It is important to have realistic expectations. It is too early to tell if we are getting into a situation that would be hard for us to get out of."

In response to the B.A.R.'s question on if the city would allow smaller fitness studios to reopen sooner, Aragón was noncommittal but acknowledged it is under consideration.

"We had started with low-risk categories first, moving to higher-risk categories, things done indoors," he said, adding of small fitness studios it is "too soon to tell about that specific activity. I know it is being considered."

Billy Polson, who co-owns DIAKADI Fitness with his husband, Mike Clausen, has been meeting with local health officials and city leaders to argue that local, independent fitness studios should be considered similar to chiropractors and other health providers allowed to see their clients. The couple helped form the coalition and helped craft safety protocols for how fitness studios can reopen that they recently submitted to local leaders for approval.

"The tough thing is it is out of our control and really based on the case count now. We are ready to go," said Polson, who launched the business 16 years ago. "All of our facilities in the coalition started putting the safety protocols in place. We are just waiting for the case counts to drop and to get the green light to open our doors."

Clausen said they were "on track to open July 13" until the city put a halt on allowing additional businesses to reopen for the time being.

"We were 99% sure we were going to get away from that August opening," he said.

The couple rents out their facility to individual trainers and three physical therapists, who are allowed to see their clients but account for just 5% of their normal income. Their location where South of Market, Potrero, and the Mission district meet isn't conducive for offering outdoor fitness sessions, so they are eager to get their facility open again.

Like others in the coalition, they are in talks with their landlord on renegotiating the terms of their lease. They have received government assistance to help cover their payroll in the interim.

Even when they do reopen, they expect to see their business drop off because people will continue to work remotely and not be commuting into the city. They will also be limiting capacity so trainers and their clients can work out safely distanced from others.
"There are so many factors that are driving our numbers down," said Polson.

Conversely, Polson and Clausen are hopeful the trainers who rent space from them will see a spike in their client base from people uncomfortable with going to larger gyms. They not only will be taping out areas double of what is required, at 12 feet by 12 feet, they will have a cleaning bar where people will check equipment out so it can be properly sanitized between uses.

They produced a video explaining the steps they are taking to protect people's health that can be viewed on their website. There also is a special safety page and manual on the website.

"Not only do you have a smaller number of people coming in, you have total control knowing what everyone touches. Our cleaning protocols guarantee all equipment is cleaned between every single touch," noted Polson.

Since locally owned fitness studios have been helping to fill vacant storefronts throughout the city, the coalition hopes people will continue to support those businesses either at their physical locations or online.

"We need you to come in as soon as possible to keep us open. I am not at all being dramatic but totally transparent," said Polson. "All of us have taken ginormous hits in this. We are trying to stay positive, but it is scary for sure."

UPDATED 7/3/2020 to clarify that the Queer Gym had 68 clients in March when the shelter-in-place orders were instituted.