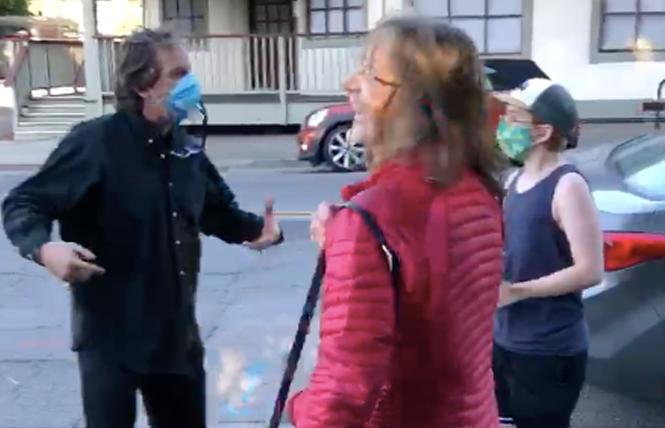 Fairfax police are recommending criminal charges after a transgender teenager in Marin County was verbally accosted by a couple who took umbrage to a Black Lives Matter bake sale.

Jasper Lauter, 17, is a trans male who was hanging up rainbow flags in Fairfax to commemorate LGBTQ Pride month.

Lauter said that he has been hanging up the flags around town during Pride Month for years with a family friend. Normally they'd do it during the second weekend in June for the annual Fairfax festival, which was canceled this year due to the novel coronavirus pandemic.

"People have said things like 'you're supporting Satan,' so I wasn't surprised that there were people causing me trouble," Lauter said in a June 30 phone call with the Bay Area Reporter. "Others said that it made their day — and for me, that's all that matters."

Lauter said that he was hanging the flags on Saturday, June 20, when he happened across a bake sale to benefit the Black Lives Matter movement — and a couple (a 67-year-old female and 58-year-old male who were not otherwise identified by police) who were arguing with its proprietors. (ABC7 reported on the incident.)

"I felt like I needed to do something if no one else was going to," Lauter said. "They started saying that racism isn't real and we've all been brainwashed."

When Lauter started to speak, he felt "trapped into a corner" and the couple started stating that "homosexuality is taught in schools" as well as that "trans people are confused."

"I said 'I'm a gay, trans man; I just wanted you to know that,' and I thought 'they're not going to be that stupid' to start arguing with me," Lauter said.

But, alas, that was when the couple escalated their harassment, saying a number of homophobic and transphobic statements that were captured in a video.

I was the 17 yr old male in this incident of transphobic, homophobic, bigoted, verbal assault.
Attached is the video that was recorded of the incident (unfortunately only pet was caught on camera). TWITTER DO YOUR THING AND SPREAD THIS FAR AND WIDE. https://t.co/664WiCiVY1 pic.twitter.com/xQLItSmW0E— Jasper David Lauter (@JasperLauter) June 21, 2020

According to video viewed by the B.A.R., the man began to disparage trans women who he claimed tried to convince him of their gender identity. The woman said, "You look like a female! There's only two, male and female, that's it!"

The couple were asked by bystanders to leave, but did not.

"The woman started pointing and staring at my crotch and was laughing," Lauter said.

Officers responded and identified the couple.

The Fairfax Police Department stated that an investigation has been completed and that the department is recommending two criminal charges against the couple.

"The video corroborated the statements provided by witnesses and the victim. Statements made and directed to the victim consisted of derogatory comments about the victim's gender, sexual orientation, and genitalia," the statement reads. "With the help of the Fairfax community at large we have received many calls and emails identifying the two persons seen in the video which had been posted on social media sites."

The charges being recommended to the Marin County District Attorney are "using offensive words in a public place which are inherently likely to provoke an immediate violent reaction" and "hate crime based on gender/sexual orientation."

"Hate crimes will not be tolerated and will always be investigated seriously and prosecuted to the fullest extent of the law," the statement concludes.

The Marin County District Attorney's office said in an emailed statement to the B.A.R. on Tuesday afternoon that the case "is being processed."

"Marin County District Attorney's Office has received a case from the Fairfax Police Department," the statement reads. "It is being processed and will be reviewed. We have no further statement or information to provide at this time."

The Fairfax Police Department did not clarify if the couple had been arrested as of press time.

"It was really obvious that I pissed them off," Lauter said.

The video was recorded by one of the individuals involved in the Black Lives Matter bake sale.

Updated, 6/30/20: This article has been updated with comments from the Marin County DA's office.