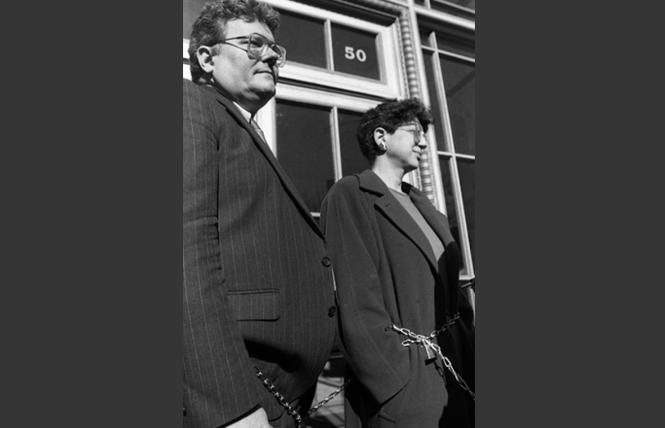 Harry Britt and Ellen R. Shaffer chained themselves to a fence outside the San Francisco Federal Building on January 19, 1989. Photo: Rick Gerharter

The 1980s were an increasingly awful decade in California. I moved to San Francisco in the 1970s from the East Coast. It didn't snow, food and rent were cheap, there was music. As governor, Jerry Brown recognized the right to union representation for farmworkers and employees of the state and at UCSF, including me. And I got a raise! I bought a stereo and thought things were looking OK. I helped to lead the successful unionization drive at UCSF.

But George Deukmejian's rule as governor from 1983-1991 ushered in a reign of austerity in public spending in the state that was more than matched by the reactionary Reagan regime in Washington, D.C. The Medi-Cal budget was slashed. Immigrants were targeted as "enemies."

The AIDS epidemic struck disease and death into our once-happy communities. President Ronald Reagan, legitimating homophobia, wouldn't say the word. A generation of wonderful vibrant young gay men was dropping like flies. They didn't seem to be enfranchised residents of the U.S.

As Walt Odets wrote in a piece on Literary Hub in July 2019, "In late October 1986, the National Academy of Sciences, the most prestigious science organization in the United States, released a report. Dr. David Baltimore of the Massachusetts Institute of Technology, cochairman of the report committee, said at a news conference in Washington that the Academy was 'quite honestly frightened by the AIDS virus's potential to spread. This is a national health crisis ... of a magnitude that requires presidential leadership to bring together all elements of society to deal with the problem.'"

"By the end of his presidency in 1989, Reagan had done nothing of substance, and the United States had suffered 89,343 deaths," Odets wrote. "The death rate was still rapidly rising, and more than 300,000 would be dead before the epidemic came under better control seven years later. Stigma had triumphed, and the death toll of young gay men was the fruit of its labor."

John Belskus was a brilliant, energetic, creative leader living with AIDS. Like too many gay men at the time, his family had cut off contact with him. When we met up he was a key organizer of the ARC/AIDS Vigil. The vigil was an encampment that housed a rotating cadre of a dozen or so young men with AIDS, plunked down in plain sight in the midst of UN Plaza, right across from the federal government buildings. The vigil called attention to the government's shocking and inhuman neglect, and demanded funding for research to figure out what was killing them, and to cure it.

Belskus and I became allies, close to soul mates. (Once I invited him and his partner/roommate, Frank, to come to dinner with me and my partner, Joe Brenner. Belskus squirmed a bit and tried to explain that he and Frank didn't quite operate their relationship like that.)

In 1988, our friend and ally, Harry Britt, an openly gay man, ran for reelection to the San Francisco Board of Supervisors. I had the joy and honor to work on his campaign. Elections were citywide — this was before district elections. Six seats on the board were open to election. Several dozen candidates were running for election or reelection to those six seats. Britt aimed to win the most votes among the field. This victory would designate him as president of the board. (Today, the supervisors elect their own president.)

Britt campaigned vigorously and persuasively all across the city for his progressive vision of San Francisco's future, inviting communities to join him as allies. His victory as the top vote-getter, thus becoming board president, was celebrated throughout the city, and certainly gave great heart to what we then spoke of as the gay and lesbian community.

1989 dawned with hope for better days. Reagan had shuffled off the stage. As Barbara Boxer made a splash in Congress for progressive issues, her staff reinforced her prospects for success by convening strategy sessions with community activists.

Equally importantly, Walter Johnson served as the dynamic, progressive leader of the San Francisco Labor Council. Johnson dubbed himself the "Voice of Justice," dedicated to cultivating San Franciscans with a sense of humor and a passion for human rights and racial justice. He supported the Community Health Coalition, a group I led that advocated for better funding of San Francisco health care services, and he invited me to serve as co-chair for a labor/community coalition that worked out of the Labor Council. 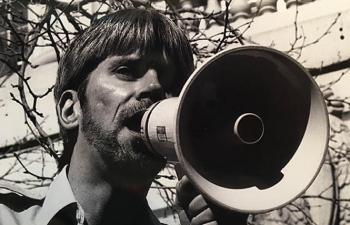 John Belskus was a key organizer of the ARC/AIDS Vigil in San Francisco. Photo: Rick Gerharter

Belskus proposed this late in 1988: Let's ask Britt and Johnson to join me in chaining ourselves to the fence surrounding UN Plaza, and demand funding for AIDS research and treatment. It would be the launch of a Bay- Area-wide series of such actions.

Britt and Johnson, fantastic leaders that they were, agreed enthusiastically.

The day came, January 19, 1989. Friends joined us to observe and cheer, including Erma (whose last name I can't recall), who attended every meeting of the Gray Panthers Health Committee with her granddaughter, who was developmentally disabled; the San Francisco rep from the Senior Legislature; Nancy Walker, a later board president; and Jane Jackson, a disabled activist who used a wheelchair. Jackson would refuse to be carried up stairs; she insisted there should be ramps. Three years later the U.S. Senate, and then the Congress, agreed with her, and the Americans with Disabilities Act became law.

The photos tell the story of the day. We gathered at the Federal Building. Britt, Johnson, and I were chained up. We got arrested. We made headlines. Not only that: we kicked off a Who's Who procession of Bay Area notables who scheduled themselves during the next several months to follow in our footsteps, and demand to be arrested so they could demand a cure.

My employer of record at the time, a downtown consulting firm, was notably unimpressed with my photo prominently displayed on page 1 of the San Francisco Chronicle alongside Britt and Johnson, above the headline: "Supervisor in Chains." Not long afterward I accepted an offer to work in Washington, D.C., in more suitable surroundings. I came back home to San Francisco when I could and tried to stay in touch. Belskus died a few years after this event, just missing out on the treatments he fought so hard for. Our friend Johnson died in 2012. And now Britt has passed on. (Mr. Britt died June 24 at the age of 82.)

We rely on their memories and their example to guide us as we go forward.

Ellen R. Shaffer, Ph.D., MPH, is a health policy analyst. She has advocated in the public's interest at the state, national, and international levels. She has served since 2002 as an adjunct faculty member at UCSF Medical Center.