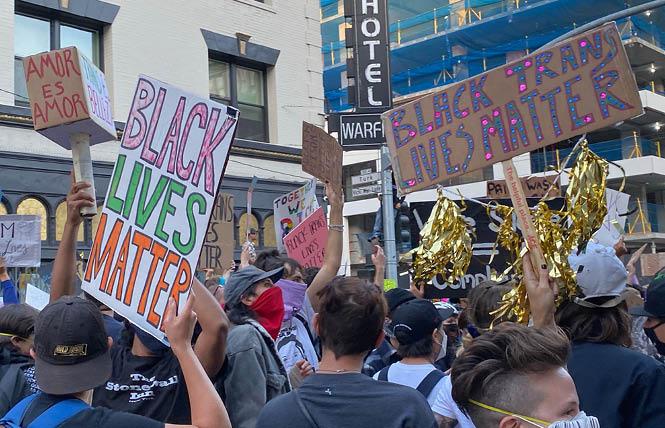 In an effort to better understand San Francisco's COVID-19 epidemic, free coronavirus testing will be available for queer and trans people of color and allies Sunday, June 28, at the Pride Is a Riot protest near Mission Dolores Park.

"In order for us to reopen our cities, counties, and states safely, we need to know the status of all of our citizens," Craig Rouskey, CEO of renegade.bio, told the Bay Area Reporter. "People of color are disproportionately affected by COVID-19, and due in part to limited access to testing, our queer and trans people of color communities could be worse off."

A queer-owned and -operated public benefit corporation, renegade.bio will offer the tests free of charge in collaboration with the testing company Primary and the phlebotomy and diagnostic sample collection company Bay Area PLS.

Testing will take place from 10 a.m. to 2 p.m. at the Children's Day School at 601 Dolores Street. Advance registration is encouraged at www.testthepeople.org

As the BAR previously reported, although the city's official Pride parade will now be a virtual celebration, activists have called for a rally starting at noon at Dolores and 19th Street, with a march to follow at 2 p.m. A separate march, dubbed Unite to Fight, will commence at 11 a.m. at the intersection of Polk and Washington streets and proceed to a rally at Civic Center.

These events continue a wave of protests that started after the police killing of George Floyd in Minneapolis on May 25. Since then, numerous marches, rallies, car caravans, and other actions have erupted throughout the Bay Area and across the country.

Sunday's events will occur amid a surge of new coronavirus cases in San Francisco and other Bay Area cities. The proportion of positive tests rose from 2.7% on June 14 to 5.1% on June 25, according to Director of Health Dr. Grant Colfax, a gay man. As a result, Mayor London Breed announced on Friday that the next phase of the city's reopening would be put on hold.

While it's unclear how much the racial justice protests have contributed to the rise, state health officials believe they likely played a role, the San Francisco Chronicle reported June 26. But because the protests coincided with economic reopening after the monthslong shutdown, California Department of Public Health director Dr. Sonia Angell said it was not possible to determine a specific cause.

Repeat virus testing urged
The PCR tests to be offered Sunday detect the virus in people who are currently infected. The type of test uses a long swab to collect a sample from the back of the throat. The pop-up site will not be doing antibody tests, which can show if someone has had the virus in the past.

For those who pre-register, Rouskey estimated that testing should take less than 15 minutes. Results should be available within about a day via Primary's website. He added that the privacy of personal health information would be protected and test results would be reported to state and county health departments as required by law.

It can take a few days before virus levels are high enough to give a positive result on a PCR test. The best time to get an accurate result is about five days after a potential exposure, according to the San Francisco Department of Public Health. Thus, a test performed on Sunday would not reveal new infections that occur that day.

To get a better sense of changes over time, participants are encouraged to return a week later, on July 5, for follow-up testing. The combined results could help alert the community to outbreaks associated with large demonstrations. A summary of the aggregate results will be publicly available at http://www.testthepeople.org

"Especially in light of our current administration's actions to withhold testing, we believe knowledge of your COVID status is a right," Rouskey said. "That's why we're bringing testing to the streets."