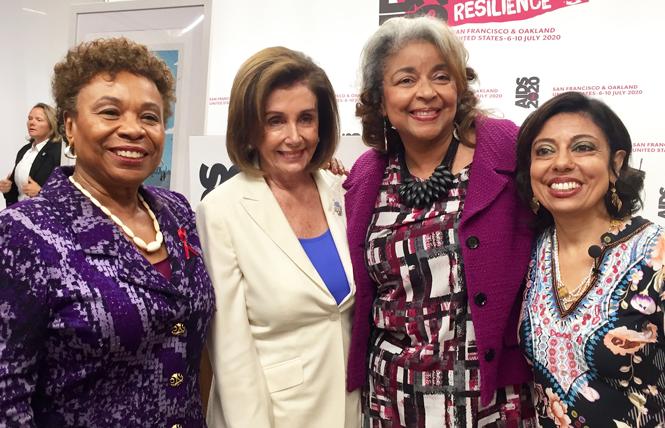 The 23rd International AIDS Conference will kick off online Monday, July 6, featuring a full program covering HIV prevention, treatment, and the domestic and global AIDS response. The virtual Global Village will offer free workshops and exhibits for community members worldwide. A free daylong program on COVID-19 will wrap up the conference Friday, July 10.

The conference, put on by the International AIDS Society every other year, was originally scheduled to take place in San Francisco and Oakland, and was expected to draw upward of 20,000 participants. But in March, organizers switched to a virtual format due to the ongoing COVID-19 crisis.

"While we are disappointed not to welcome our HIV community in person to the Bay Area, AIDS 2020: Virtual will equalize access, create new pathways for collaboration, and maintain international impact," conference co-chair Dr. Monica Gandhi of UCSF and Zuckerberg San Francisco General Hospital previously told the Bay Area Reporter.

The virtual format will enable the conference to run sessions around the clock, allowing people in all time zones to watch parts of the meeting live. Recordings of the sessions will then be available on demand.

"I call on people to get together at AIDS 2020: Virtual in greater numbers than ever before and recommit to working together to end the AIDS epidemic," UNAIDS Executive Director Winnie Byanyima said in a news release.

This year's plenary speakers will include well-known researchers, health officials, and community members speaking on topics ranging from health disparities to HIV vaccine and cure research to HIV among women and youth. Each plenary talk will be followed by a live question-and-answer session.

On July 9, Ambassador Dr. Deborah Birx, who oversees the President's Emergency Plan for AIDS Relief, or PEPFAR, but has recently become more familiar to the public as a member of the White House Coronavirus Task Force, will speak about the global AIDS response. Later that day, Dr. Susan Buchbinder of UCSF will discuss advances in biomedical prevention beyond daily PrEP.

On the PrEP front, researchers will present the full data from the HPTN 083 trial of long-acting injectable PrEP, according to Gandhi. As the B.A.R. recently reported, the injectable antiretroviral drug cabotegravir given every eight weeks was found to be equivalent to daily oral Truvada.

Researchers from Kaiser Permanente San Francisco will present long-term follow-up data from Kaiser's large PrEP program. The Kaiser team recently reported that gay and bisexual men taking on-demand PrEP before and after sex — also known as PrEP 2-1-1 — had good adherence and none were diagnosed with HIV.

Nurse practitioner Janessa Broussard of the San Francisco AIDS Foundation will present PrEP 2-1-1 findings from the nurse-led PrEP program at Magnet sexual health clinic at Strut, the men's health center in the Castro. Other locally-focused presentations will look at HIV-related stigma and barriers to care among Latino gay men, people who inject drugs, and people experiencing homelessness in San Francisco.

In the policy realm, researchers will report on data from 10 African countries showing that punitive laws against same-sex relationships are linked to high HIV rates. Another presentation will look at the impact of the "global gag rule" on communities affected by HIV. Officially known as the Mexico City Policy, the rule bans U.S. funding of any organization that provides abortion counseling or referrals, which is a concern in low- and middle-income countries where reproductive health and HIV prevention services are often provided together.

Regarding the COVID-19 conference, "some exciting abstracts will be presented, including the final results of the mass testing campaign in the Mission district of San Francisco," Gandhi told the B.A.R.

In related news, HIV 2020, an alternative conference that was to be held in Mexico City concurrently with AIDS 2020, has also switched to a virtual format.

HIV 2020 was organized by advocates who oppose holding the International AIDS Conference in the United States, citing a political climate increasingly hostile to immigrants, people of color, gay and transgender people, sex workers and others heavily impacted by HIV.

That conference will now be comprised of two-hour sessions that will take place via Zoom between July and October, concluding with a virtual event on December 1, World AIDS Day. Several films and art exhibits will be available throughout the entire period. The opening session is scheduled for July 6.

For more information and registration for AIDS 2020, visit http://www.aids2020.org