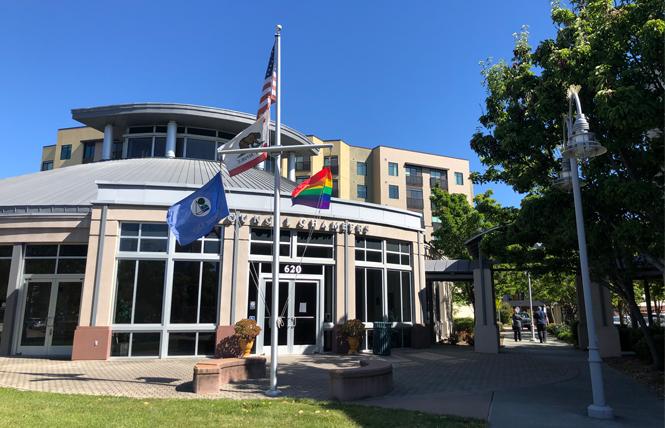 Two weeks after they rejected requests to fly the Pride flag, the city council members in Foster City, California Monday night reversed course and voted 3-2 to do so. The flag will now go up Wednesday, June 17, at City Hall and remain flying through the end of June.

As the Bay Area Reporter first reported June 1, the leaders of the Peninsula city in San Mateo County had rejected requests that they fly the rainbow flag because they were concerned doing so would open them up to having to also fly flags associated with racist groups or causes. Their decision led the Reverend Jim Mitulski, a gay man who is pastor of the Island United UCC Church in Foster City, to launch a public campaign to convince the council to reconsider.

Already 10 other municipalities in the jurisdiction are flying the international symbol for the LGBTQ community. As of last week the Pride flag could be seen flying in front of civic buildings in Belmont, Brisbane, Colma, Daly City, Half Moon Bay, Redwood City, San Bruno, San Carlos, San Mateo, and South San Francisco.

Foster City's council members last year had declared a Pride day in June at the request of the UCC church. This year, the county's LGBTQ commission has asked all 20 cities and towns on the Peninsula to issue Pride Month proclamations and to also fly the rainbow flag.

Due to the novel coronavirus outbreak leading to the cancellation of in-person Pride events - replaced with virtual gatherings - LGBTQ leaders have argued seeing individual cities visibly mark the annual LGBT celebrations is even more important. With people socially isolated as they sheltered in place to help control the spread of the virus, seeing the Pride flag raised in front of their city hall or other community building signals they are accepted and valued, they have noted.

This year the Foster City council adopted a proclamation declaring all of June as Pride Month. They presented it during their meeting tonight, June 15, to Lelan Anders, a member of the county's LGBTQ advisory body.

It's doing so, said Anders, lets the city's LGBTQ residents "know they are seen and are important."

For a community that often feels invisible, added Mitulski, the proclamation lets LGBT people know "you see us and you value us. I can't tell you how much that means to us."

Later in the meeting the council members voted to adopt a flag policy that paved the way for them to also order city staff to raise the Pride flag this Wednesday. In a memo to the council, Jean Savaree, the city attorney for Foster City, explained her initial reservations she had voiced to one of the council members about flying the rainbow flag.

As the B.A.R. reported the night of the city council's initial June 1 vote, City Councilwoman Catherine Mahanpour, currently serving as mayor, rejected flying the Pride flag. She said the city's municipal building "really wouldn't lend itself to" doing so.

City Councilman Sam Hindi said he had conferred with Savaree who shared his concerns that agreeing to fly the rainbow flag "opens the door" to the city having to raise flags associated with racist groups or other entities the city wouldn't want to be associated with.

At the June 15 meeting, Foster City Chamber of Commerce Vice Chair Dan Demers thanked the council for issuing the Pride proclamations it has done but also urged them to also fly the flag. Doing so, he said, would encourage other cities to follow suit.

"While admirable first steps this does fall short," said Demers, referring to the proclamations. Flying the flag, he added, is a "powerful symbol of acceptance and allyship to the LGBTQ community and a beacon of hope to the citizens, employees and employers who champion or identify with the LGBTQ community."

Vice Mayor Sanjay Gehani chalked up what happened at the earlier council meeting as a "misunderstanding" and made it clear he would be supporting adoption of the flag policy and raising the Pride flag.

"We should be making every effort to stand together," he said.

Councilwoman Richa Awasthi also spoke in favor of doing so. She said it was time for the city to fly the Pride flag and questioned what message it would send if it refused to do so when all the cities surrounding it are doing so.

"To me displaying the Pride flag in the month of June informs the LGBTQ community that they are included, they are loved, they are a part of us," said Awasthi, adding that she wished the council had voted on the issue sooner so the flag could be up all month.

Hindi provided the third vote in support of flying the Pride flag, and he thanked the mayor for bringing the item back before the council. He added that the city attorney had provided him a "better answer" to his questions about the flag issue than during their prior conversation.

"To me really it is a no brainer to raise the Pride flag and make sure Foster City is a welcoming community," said Hindi.

But Mahanpour and Councilman Jon Froomin both spoke out against approving the flag policy and voiced concerns that flying the Pride flag would be divisive.

Froomin argued the policy requires the council and future councils "to discriminate between groups" if it votes to deny a flag request but approve a different one. He also objected to seeing the city's flag be removed in order to fly a commemorative flag in front of city hall and suggested a flagpole be erected in a city park for such flags.

"I want it to be very clear to the public, my vote on this has absolutely nothing to do with the Pride flag," said Froomin, explaining his opposition was focused on the position if puts the council in going forward in deciding on other commemorative flag requests. "If this policy is adopted, my intention is to approve any flag that comes our way."

Mahanpour said she agreed with Froomin's stance and reiterated her belief that the city, state, and U.S. flags should be the only ones flying in front of city hall.

"I see the stars and stripes as a sign of unity and diversity," she said. "I see no reason to change our practices on this."

As a compromise, Hindi revised his motion so that the city will fly the city, U.S. and Pride flag for the rest of June.