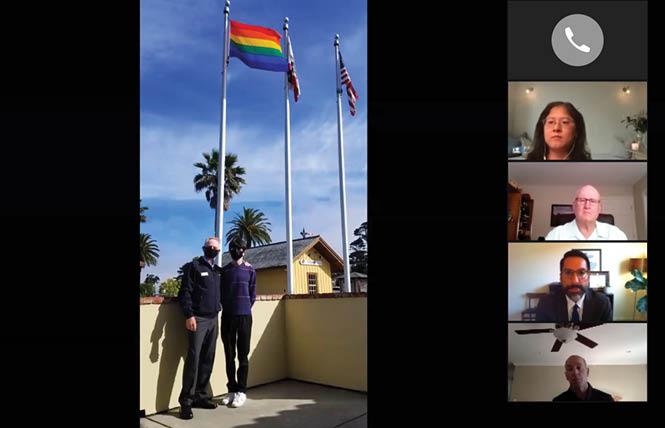 The Bay Area counties of Contra Costa and San Mateo are closing in on achieving countywide Pride observances for the first time this year. But it will be another two weeks before every city and town in both jurisdictions officially celebrates June as being Pride Month.

LGBTQ leaders in both counties have been asking that each city and town in their area issue a proclamation declaring June as Pride Month and to also raise the rainbow flag. As the Bay Area Reporter has been covering, nearly all the cities will be issuing Pride proclamations this year.

But not every city plans to raise the rainbow flag, the international symbol for the LGBTQ community. In some it has become a flashpoint, with members of the San Ramon City Council expressing frustration at their meeting Tuesday night that a vote on displaying the Pride flag has been postponed to their June 23 meeting, leaving only seven days left in June for the flag to be flown if approved as expected.

The city this week did issue a Pride Month proclamation. It is also lighting up its City Hall in the colors of the rainbow flag.

In Foster City the council members initially refused to fly the rainbow flag because they were concerned doing so would open them up to having to also fly flags associated with racist groups or causes. Their reasoning was met with protest by the Reverend Jim Mitulski, a gay man who is pastor of the Island United UCC Church in Foster City.

He has led a public campaign to urge the council members to reconsider. They are now set to reexamine the issue and likely adopt a flag policy when the council meets Monday, June 15, and officially issues its Pride Month proclamation.

In a memo to the council, Jean Savaree, the city attorney for Foster City, explained her initial reservations she had voiced to one of the council members about flying the rainbow flag.

Commenting on a post on the Facebook page for the San Mateo County LGBTQ Commission, Mitulski thanked Commissioner Lelan Anders for assisting with reaching out to the council members regarding the flag issue. He also asked for people to "pray for us that Foster City votes the right way on Monday's vote to reconsider the original decision not to fly the flag."

In Colma, this is the second year in a row the city has raised the rainbow flag in addition to declaring June as LGBTQ+ Pride Month. In 2019, the flag flew on the flagpole in front of the town hall below the state and U.S. flags.

This June, the city is flying the Pride flag on its own on one of the three flagpoles at the Colma Community Center. Raising the flag both times was Colma Mayor John Goodwin accompanied by his son, Sean, 18, a member of the LGBTQ community who just graduated from El Camino High School.

Photos of the two flag raising ceremonies that the mayor shared with the B.A.R. capture how different of a time each took place in. Last year, father and son stood smiling on the steps of the town hall with the family's dog in the mayor's arms. This week, it was just the two of them adorned with face masks in light of the novel coronavirus outbreak.

In an emailed reply about the flag raising ceremony, Goodwin told the B.A.R. he is "not only proud to be (Sean's) dad but proud he stood with me this morning."

During the June 10 proclamation presentation, Goodwin said "it was an honor to raise the flag this morning" and noted that it was "a beautiful morning out here in Colma."

Krystle Cansino, a member of the San Mateo County LGBTQ Commission who virtually accepted the proclamation, teared up at seeing the rainbow flag flying on its own. Cansino thanked the council for doing so.

"Colma is a leader among cities. You took the initiative to do this without hesitation," said Cansino, adding that seeing the Pride flag flying gives LGBTQ Colma residents "a deeper sense" of being accepted and included in their community.

More proclamations
Peninsula municipalities issuing their first Pride proclamations also grew this week with the councils in Pacifica, Hillsborough, Millbrae, and Portola Valley all declaring June as Pride Month for the first time. Burlingame, East Palo Alto, and Woodside had all done so in recent weeks.

Accepting Millbrae's proclamation during the council's virtual meeting June 9 LGBTQ Commissioner Giuliana Garcia thanked the council for doing so and expressed how the LGBTQ community stands in solidarity with the African American community as it fights to end police brutality, similar to how LGBTQ patrons of the Stonewall Inn in New York City stood up to police harassment 51 years ago this month.

"June is an exciting month for the LGBTQ+ community and this year is the celebration of the 50th anniversary of the foundational Pride celebrations in San Francisco, New York and many cities, and is the fifth anniversary of marriage equality," said Garcia, adding that it also "doesn't feel right to be celebrating anything right now, especially with all the pain in the world, especially in the black community."

Wednesday night, after reading his town's Pride proclamation, Portola Valley Mayor Jeff Aalfs virtually presented it to LGBTQ Commissioner Craig Wiesner. In thanking the town for signing on to the Pride Visibility campaign this year, Wiesner noted how the initiative to have all 20 cities and towns in San Mateo County celebrate Pride this year took on greater importance due to the health pandemic leading to people being asked to shelter in place and in-person Pride celebrations being canceled.

Like most such events, San Mateo County's Pride was turned into a virtual happening that has been taking place all week and will culminate with an online celebration this Saturday, June 13.

Aalfs said he and his colleagues "are proud to support the cause."

The last two cities in San Mateo County to recognize Pride Month are Menlo Park and Atherton. The town council in Atherton is set to do so when it meets next Wednesday, June 17.

According to county officials, Menlo Park is also supposed to issue a Pride proclamation this year. It is unclear if it has already, or when it will, as the City Council has yet to list it on one of its meeting agendas and city officials have not responded to the B.A.R.'s queries on when the proclamation presentation will take place.

Contra Costa sweep coming
Across the bay LGBTQ leaders are expecting to achieve their goal of having all 19 cities and towns in Contra Costa County mark Pride in some manner for the first time this year come Wednesday, June 24, when the city of Moraga is set to once again declare June as Pride Month. The night prior, June 23, Brentwood and Oakley are both planning to issue their Pride Month proclamations.

None are expected to raise the Pride flag this year, similar to Danville, which issued its first Pride proclamation this year. As of June 10 the rainbow flag was flying in the cities of Antioch, Clayton, Concord, El Cerrito, Hercules, Lafayette, Martinez, Orinda, Pinole, Pittsburg, Pleasant Hill, Richmond, and Walnut Creek. It should be raised in San Pablo next week, as the city council there adopted a flag policy in May.

San Pablo Mayor Arturo Cruz told the B.A.R. he expects his council to approve flying the flag on the city's Civic Center flagpole when it meets Monday, June 15. While Orinda raised the flag June 1, its City Council will be issuing its Pride Month proclamation when it meets next Tuesday, June 16.

Due to their having to hold meetings virtually because of the pandemic, the cities of Martinez and Pittsburg opted not to issue Pride proclamations this year. Instead, they just raised the rainbow flag. Concord also has yet to issue a Pride proclamation, and its mayor has not responded to the B.A.R.'s questions on if it will do so. But LGBTQ leaders said the city is flying the rainbow flag.

UPDATED 9/1/2020 to correct the spelling of Krystle Cansino's name, as it was incorrectly listed on the webpage for the LGBTQ commission members.