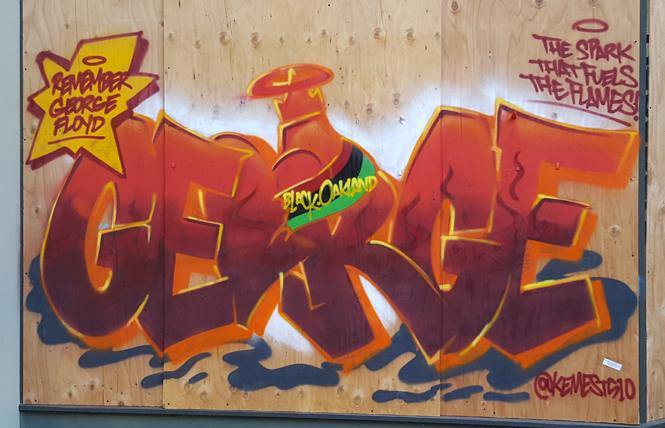 First of all, I am talking about the peaceful protests. I live in Oakland, California and during 1967's Summer of Love it was our neighboring city of Berkeley that garnered the media attention for demonstrations and protests.

Now it is Oakland and the Oakland-San Francisco Bay Area in the forefront. The latest catalyst was the cellphone video of the killing of George Floyd in Minneapolis last month after a now-fired police officer kneeled on Floyd's neck for eight minutes and 46 seconds. One officer epitomizing police brutality and that #BlackLivesMatter is an enigma to him.

Three officers stood by and did nothing to prevent the death by the hands of their colleague for Floyd's crime of allegedly passing a counterfeit $20 bill. (Minnesota Attorney General Keith Ellison charged Derek Chauvin, the officer who kneeled on Floyd's neck, with second-degree murder. The other three ex-officers were charged with aiding and abetting murder.)

The cry again was "I can't breathe." We heard it before in 2014 when Eric Garner uttered the words as a New York police officer put him in a chokehold while arresting him. Garner died.

The Reverend Al Sharpton, in his memorialization of Floyd, noted that white folks have had their knees figuratively on the necks of black folks for 401 years. "Get your knee off our necks," Sharpton said during his powerful eulogy.

The message is clear through the protests behind the chants of "Fuck the police" and "All cops are bastards" — it is a call for justice.

After all of the ex-Minnesota police offices had been arrested, the chant was "We got all four."

Floyd's death came on the heels of the killings of Breonna Taylor and Ahmaud Arbery. And before social media in 1955, Emmett Till, who was lynched in Mississippi.

It has been said that black folks are killed or harassed by police and other white people for driving, shopping, jogging, sleeping, birdwatching, and simply living while black. And white folks know that whatever lie they might tell about a black person will be believed — from Till in 1955 to Christian Cooper, the gay New York birdwatcher that a white woman called the police on, in 2020.

It's racism and white privilege about the denial of 401 years of abuse, torture, and murders since we were forcibly brought to the United States. And it is more than the literal color of our skin; it is that we are black regardless of our skin tone. We come in all colors but our blackness unites us and simultaneously subjects us to these outrageous acts.

It is said that "silence equals compliance" and "silence is violence."

White people, we need you as our allies. Many folks think LGBTQ is tantamount to white, but of course, people of color are LGBTQ as well.

Tony McDade, a black transgender man, was shot and killed by Tallahassee Police officers on May 27.

Here's to hoping that the collective voices of the thousands of protests against police violence and racism will be heard.

The call for action is for justice for those who perpetuate violence and to prevent these acts from recurring.

We need you to talk among yourselves, and put an end to racism and acknowledge your white privilege and be the change. We need more than your marching and signs. Figure it out, we did not have to teach you how to be racist and use and abuse your white privilege, so we should not and are not going to help you dismantle racism and deal with your privileges.

Google, listen, and read. For starters, check out "How White People Can Help;" "75 Things White People Can Do for Racial Justice;" "Now is the time to listen;" and "100 ways you can take action against racism right now".

The ultimate call for action is for love and peace and seeing each other as human beings and not "the other."

Kiki Monifa is a writer, editor, blogger, vlogger, and podcaster for numerous outlets including www.blackhistoryeveryday.com, http://www.kikiposts.com, and http://www.Anchor.fm/Kikipodcasts