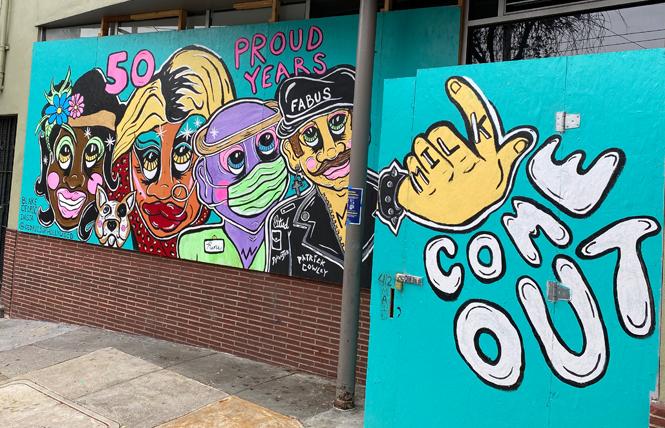 Murals have begun to appear on the plywood that became a staple of Castro neighborhood storefronts following the imposition of shelter-in-place orders in March due to the novel coronavirus.

"This is a really amazing show of solidarity with folks in the Castro working together to make it happen," Shannon Amitin, a trans activist who is on the advisory boards of both the Castro Merchants and the Castro LGBTQ Cultural District, told the Bay Area Reporter via phone May 29.

Amitin said that the idea for more murals in the Castro pre-dated March's widespread business closures.

"It started in a conversation with Eddie Ferriter. Eddie and I came together with a desire to work on improving what he calls 'the low hanging fruit' — the smaller ways we can improve the neighborhood and make it a little bit better," Amitin said, referring to the Castro resident. "We were working on semi-permanent installations in empty storefronts, but then COVID happened."

After Governor Gavin Newsom ordered the state's bars closed the afternoon of March 15, and Mayor London Breed announced an order for city residents to shelter in place the following day, many businesses decided to board up to discourage vandalism and looting.

As the B.A.R. previously reported, gay District 8 Supervisor Rafael Mandelman said that his office worked with the planning department and the Department of Building Inspection to make sure business owners wouldn't be penalized for boarding up.

Boarding up is usually forbidden in many circumstances in order to prevent the appearance of blight, but these legal requirements have not been enforced in San Francisco since the shelter-in-place order took effect.

While some discouraged boarding up storefronts, others decided to make the best of what had been an unthinkable scenario.

Amitin said that the Castro Merchants, the Castro LGBTQ Cultural District, and the Castro/Upper Market Community Benefit District joined together to connect artists with business owners.

A GoFundMe page for the Castro Art Project reached its $1,500 fundraising goal spearheaded by Amitin and Ferriter on May 27.

"We've been working on getting a hold of businesses and getting approval," Amitin said. "From a cultural district standpoint, we have had a strong emphasis on working with queer muralists."

Artists from Paint the Void, a group that has been working on getting gigs for artists who are struggling due to the economic shutdown, has been heavily involved.

"Paint the Void is an organization that has an impressive operation of professional installations," Amitin said. "They are doing this citywide." 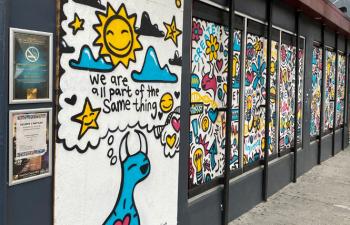 The mural on the boarded up Beaux bar features an inspirational message. Photo: John Ferrannini

Museum mural celebrates 50 years of Pride
Almost two-dozen murals have appeared in the Castro, though not all are connected with the aforementioned initiative.

For example, Terry Beswick, a gay man who is the executive director of the GLBT Historical Society and its museum on 18th Street, told the B.A.R. via phone May 28 that the museum was boarded up later than many surrounding locations.

Beswick ultimately asked his landlord to board up the museum because he was "worried about the artifacts inside" after someone graffitied the front window.

"Then I noticed all of the murals going up and reached out to my friend, Juanita MORE!, who is the queen of murals in San Francisco," Beswick said.

"I've known Blake Cedric for quite a long time," MORE! wrote in an email to the B.A.R. June 2. "I've always been a fan of his brightly colored creations that have been so diverse in depicting the people he sees in the San Francisco nightlife scene. Turning his work into a mural has secretly been something I've been wanting to figure out how to do.

"When the opportunity came, I jumped at connecting him with Terry Beswick at the GLBT Historical Society," MORE! continued. "I know the subject matter was emotional for Blake to paint, and hope that there are many more murals to come."

Beswick got a discount on art supplies from Cliff's Variety on Castro Street. Cedric had never before painted a mural.

"Juanita reached out and contacted me about doing the mural," Cedric told the B.A.R. in a June 2 interview. "I was asked to do something that showed diversity and also represented the 50 years of Pride. That was the only direction I was given."

Cedric's mural, which encourages people to "come out," features four people who represent the LGBT community.

"I pretty much painted four people based on that (from right): a leatherman and an homage to San Francisco nightlife staple and legend, Steve Fabus; Rene Pierre, a nurse at UCSF who has been a great worker for the queer community, being an essential worker who is also helping people out with meals; Juanita [MORE!] and [her dog] Jackson; and the trans black activist Marsha P. Johnson," Cedric said.

"I tried to put an array in there," Cedric said. "I free-handed it."

"The mural on the museum was painted by a friend, and Elliott [C.] Nathan [of Paint the Void] was also a friend, so it's challenging to answer the question," Amitin said. "I have a soft spot for the Harvey Milk one."

The Milk mural, which features the late supervisor arrayed by rays of light, is at the Mudpuppy's dog grooming business at 536 Castro Street — which is on the same block as the former Castro Camera store that became Milk's political headquarters. (It is now the Human Rights Campaign's Action Center and Store.)

Josh Katz, who painted the mural, was connected to Mudpuppy's through the Castro Merchants. He wrote in an email to the B.A.R. June 2 that it is the first in "a new series where I paint leaders from queer history in the form of public murals."

"I decided to paint Harvey's portrait, smiling, and with encouraging language stenciled into the background of the mural," Katz wrote. "I made stencils of phrases such as Harvey's, 'Hope will never be silent,' and collaged my own stenciled phrases such as 'We are resilient,' 'We will persevere,' and 'Support your community.'"

As the B.A.R. previously reported, the "Hope will never be silent" quote is widely attributed to Milk, though it is unclear when he first said it.

Beswick said he hopes the murals can be preserved, at least digitally, once more Castro-area businesses reopen.

"We're definitely talking about that," Beswick said. "We are going to document the murals as much as we can before they come down."

Ferriter did not respond to a request for comment at press time.