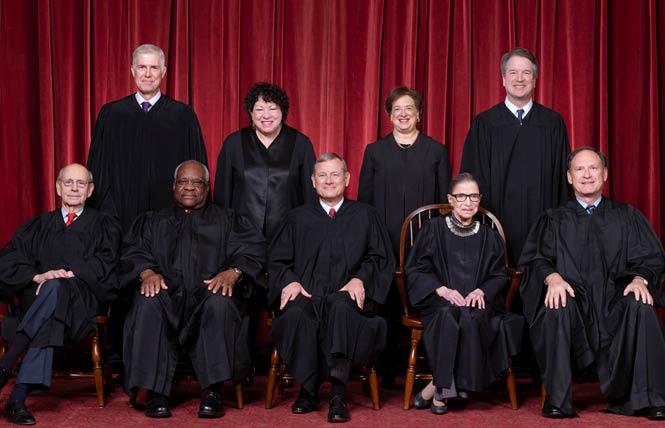 While LGBT people nervously await the U.S. Supreme Court's decisions regarding two big employment discrimination cases, the court this month heard arguments in other cases that could have significant impact.

In a historic first, the cases were heard via conference call due to the novel coronavirus pandemic. The audio was broadcast live on CSPAN and other outlets.

On Wednesday, May 6, the Trump administration defended its efforts to change the rules for implementing the Affordable Care Act in a way to make it easier for employers to deny certain coverage by claiming a religious freedom to do so. And in a May 5 case, the Trump administration argued for the right to block federal funds to foreign AIDS groups unless they issue a statement against sex trafficking and prostitution.

The cases, Trump v. Pennsylvania and Little Sisters v. Pennsylvania, are appeals from the 3rd U.S. Circuit Court of Appeals, which upheld a national injunction issued by the district court. That injunction has blocked from taking effect new Trump administration rules for the ACA that seek a wide array of employers to deny coverage for some procedures, by saying they have "conscience-based," religious, or moral objections.

Jenny Pizer, senior counsel at Lambda Legal Defense and Education Fund, said that, while the new regulations were aimed primarily at contraception for women, "the implications for LGBTQ people and everyone living with HIV" are also "dire."

"Freedom of religion has never meant allowing religious objectors to deny the rights or freedoms of others, but that is precisely what the court is being asked to do," said Pizer.

During Wednesday's oral argument, Chief Justice John Roberts and Justice Elena Kagan challenged Solicitor General Noel Francisco to defend the administration's new rule against claims that it is too broad. Justice Ruth Bader Ginsburg, participating in the call from the hospital, where she's being treated for an infection, stated emphatically that the rule tries to "toss to the winds entirely" Congress's intent to ensure women had adequate health coverage and that the Trump administration was "shifting employers' religious beliefs onto employees who do not share those religious beliefs."

Francisco disagreed and said there was "nothing" in the ACA that requires contraception be a covered medical service and that the administration has the "discretion" to decide that matter.

While the focus of Wednesday's cases was contraception, Lambda Legal and other LGBT legal groups worry the Trump rule sets the stage for allowing employers to claim religious objections to providing other medical services of special interest to LGBT people, like reproductive services, gender transition care, and family benefits for same-sex spouses.

Lambda Legal and the Human Rights Campaign, the national LGBT rights group, submitted briefs to the Supreme Court arguing against the Trump rule change, as did the American Civil Liberties Union and seven out of nine openly LGBT members of Congress. (Not signing the congressional brief were bi Senator Kyrsten Sinema, D-Arizona, and lesbian Representative Sharice Davids, D-Kansas.)

The National Center for Lesbian Rights, the National Black Justice Coalition, and GLBTQ Legal Advocates & Defenders joined a brief opposing the rule, and lesbian Attorney General Maura Healey of Massachusetts led a brief joined by 19 other states, including California, Colorado, Illinois, and Michigan. Attorneys for many cities also filed a brief against the Trump rule, including Chicago, Houston, New York, Oakland, and San Francisco.

AIDS case
On Tuesday, the court heard arguments in a case to determine whether the federal government could withhold funds from a U.S. group fighting AIDS overseas until the group certified that its foreign partners denounced prostitution and sex trafficking. The case, U.S. AID v. Alliance for Open Society, revolves around a 2003 law that provides billions of dollars for combatting AIDS but only to groups that "explicitly oppose" prostitution and sex trafficking."

AIDS groups opposed the law and, in 2013, the Supreme Court said the requirement — as applied to groups based in the U.S. — violated the First Amendment. But the appeal this second time around is whether the requirement can be pressed against foreign groups who get U.S. funding as affiliates of the U.S. groups.

During argument, Justice Sonia Sotomayor noted that the Supreme Court ruled in the Boston St. Patrick's Day parade case (Hurley v. Irish-American GLB) in 1995 that the parade organizers had a First Amendment right to choose who to affiliate with.

In a response that could come back to haunt the Solicitor General's office in religious freedom cases, Assistant to the Solicitor Christopher Michel said, "no one is forcing the domestic entity to affiliate with a foreign entity."

"The domestic entity has a choice to take the money and use it itself, and any hypocrisy or disturbance to its message that results is a result of its own choice to affiliate with a group," said Michel.

Other items
The Supreme Court announced in February that it would review a lower court decision that held a city that provides taxpayer funding to a Catholic foster care agency could require the agency to comply with the city's ordinance prohibiting discrimination against same-sex couples. LGBT activists have argued that the Catholic agency does not have to take city funding to administer the program so the city's withdrawal of its funding does not violate the Catholic agency's religious beliefs. The court will hear the case, Fulton v. Philadelphia, next session.

Meanwhile, LGBT activists will be watching the Supreme Court carefully between now and the end of June to see how it rules in cases testing whether the existing federal Civil Rights Act prohibits job discrimination based on sexual orientation and transgender status. The court will release one opinion concerning sexual orientation, involving the cases Bostock v. Clayton County and Altitude Express v. Zarda. The transgender status decision will come in Harris Funeral v. EEOC.