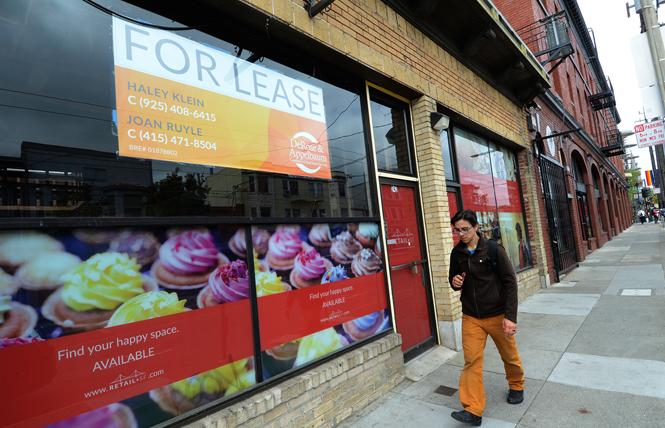 Formerly Sparky's Restaurant, the location now is vacant, one of many empty storefronts in this block of Church Street. Photo: Rick Gerharter

The Bay Area Reporter recommends NO votes for Propositions D & E on the March 3 ballot.

Proposition D: Vacancy Tax. NO. At first blush, who can be against this simple, feel-good measure that proponents expect will solve the troubling trend of increasingly vacant commercial spaces in San Francisco? Yes, there are greedy landlords who are willing to tolerate a vacancy while holding out for the highest rent the market will bear. But in reality empty storefronts, restaurants, and malls are multiplying across the country and the reasons are many and complex, the foremost being that supply exceeds demand. In addition to high rents, the challenges of doing business in San Francisco are too much for many entrepreneurs to bear: bureaucratic red tape and a protracted permitting process; onerous taxes; scarcity of workers; decreasing parking spaces; homeless encampments; competition from big box stores; ordinances banning chains (businesses with more than 11 locations); and the potential objection from neighbors, local merchant associations, and neighborhood groups.

The main reason that retail vacancies are growing nationally is a profound change in consumer behavior as a result of the convenience of online shopping, competitive prices, and speedy delivery — more people are just not bothering to shop or dine in person. It's irresponsible to pretend that slapping a vacancy tax on landlords, their subtenants or sublessers alone is the magic bullet to reverse this dynamic.

The Board of Supervisors should be doing the hard work of cutting the red tape that frustrates and discourages businesses from operating in our neighborhoods; instead, it punted and placed Prop D on the ballot. We recently reported on a gay couple who spent several years trying to open a French tea salon in the Polk Gulch neighborhood — and they're not alone. Local businesses need meaningful support from City Hall to open faster and maintain conditions to succeed.

Given the overwhelming support and desperation to do something to fill commercial spaces quickly, this measure is sure to pass. We need a sophisticated, comprehensive approach to address the conditions that discourage businesses from opening and thriving, but we're not convinced that this cure will have the intended consequences as promised, and are wary that it has the potential to undermine its goals.

Proposition E: Limits on Office Development. NO. Like Prop D, this measure looks for a quick fix to a very complicated problem. Prop E was placed on the ballot via an initiative petition. It would tie the city's annual allotment for office space projects that are at least 50,000 square feet (large office projects) to whether the city is meeting its affordable housing goals, and sets a minimum affordable housing goal of 2,042 units per year for this purpose. If the city doesn't meet that goal, the next year's allotment of square footage for office space would go down by the same percentage. San Francisco does need more affordable housing, but Prop E does not address this problem.

The city controller noted in the voter guide that in 1986, voters adopted a program that generally created a limited annual allotment of new office spaces that may be developed in the city. Prop E would amend that.