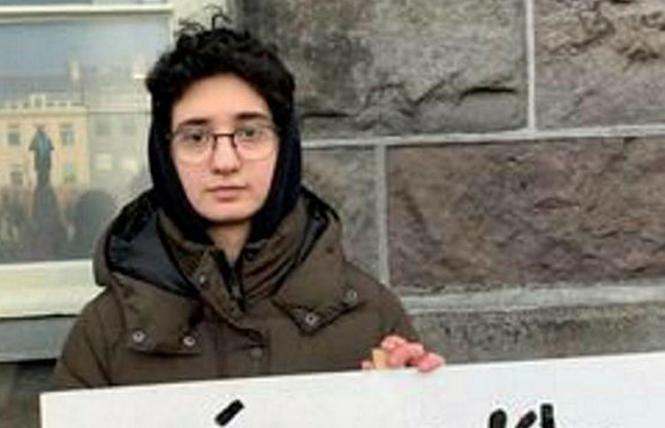 LGBT activists, medical professionals, and others are calling for Iceland to stop the deportation of a transgender youth and his family.

Mani Kynnir Sig's doctors at Landspitali National University Hospital have issued a statement to Iceland's government, calling the teenage transgender boy's deportation "unjustifiable" after he was admitted to the hospital last week for psychological stress right before the February 17 deadline.

Sig, 17, spoke in Farsi about his situation in a video posted by No Borders Iceland February 15.

In a text message Wednesday, Wilson said that at the family's request, she is not authorized to discuss the case.

The Dublin Regulation, a nearly two-decade old United Nations rule, gives member countries the option to send asylum applicants to their "previous point of departure," reported the Grapevine. In the Sig case, that would be Portugal.

In a February 21 statement, Minister of Justice Áslaug Arna Sigurbjörnsdóttir expressed concern about the family's ability to "live a secure life" if they are deported.

"The Christian faith implores us to defend a humane life and implores hospitality and compassion for all people. God loves us as we are - we all have the right to safety and security when we ask for it," stated Sigurbjörnsdóttir, reported Reykjavik Grapevine.

The statements came after 50 demonstrators marched from the Ministry of Justice to Hverfisgata quarter in Reykjavik. They delivered more than 8,000 signatures, about 2% of the country's population, asking the ministry to reconsider Sig and his family's situation.

A coalition of LGBT organizations is alarmed that Sig, who came out as transgender in October 2019, and his family are not being permitted to discuss Sig's asylum claim with immigration authorities.

Alarmed
Elínborg Harpa Önundardóttir, an activist with No Borders Iceland, told NBC News what concerned them the most was that immigration officials didn't question the teen or his family about the situation.

Sig's family fled Iran due to his father being persecuted, tortured, and imprisoned for his beliefs, reported Iceland Monitor. Adding to the family's case is Sig's gender identity.

Homosexuality is criminalized and carries a death sentence in Iran. However, Iran supports transgender individuals' sex reassignment through surgery.

Despite the law, the family has been searching for a safe home for their child. They applied for asylum in Portugal and Iceland after fleeing Iran. The family had to leave Portugal two days after arriving in the country and filing an asylum claim there because Iran's Revolutionary Guard allegedly sought to arrest them and force them to return to the Middle Eastern country, Atla Hrafney, an associate with advocacy group Trans Iceland, told NBC.

"He was never asked about his situation by the immigration office, nor the appeals court, which they are legally bound to do," Önundardóttir said. "In Iceland, the authorities have a general tendency to look at children that come [to the country] accompanied by their parents as the luggage of their parents. They don't really count as human beings."

Others said that the teen has rights.

"He has the right to express himself," said Hrafney. "The fact that he was not allowed to before the final decision was made is actually a breach of law."

Activists pointed out that the directorate is ignoring Icelandic law that protecting a child takes precedence in decision-making about their issues and the United Nations Convention on the Rights of the Child, of which Iceland is a signatory country.

In an interview, Iceland's director of immigration, Þorsteinn Gunnarsson, claimed the Sig family rejected the directorate's request for an interview, reported the Grapevine.

However, Ashonie Wilson told Grapevine that there is no documentation to support the directorate's claims.

"The trans child is in active danger," said Hrafney, stating that Iranian authorities are actively looking for the family. "If he goes back to Portugal, he would be brought back to Iran."

Vally Hirst Baldurs, chairperson of the queer student association Q, told NBC that it feels like "the people in charge are turning their backs on [LGBTQ people] as a community."

"We are a family," said Baldurs, who is a trans and nonbinary person, "and [Mani] is a part of our family and our community."

To see Sig speaking about his situation, click here.

Attendees to the event will enjoy live performances, art, and fashion by local artists and designers - both established and emerging - as well as some works by members of the Nairobi youth group, food and more at the RYSE Youth Center 205 41st Street.

The event takes place from 4 to 8 p.m. It is free and open to the public.

The center provides a variety of programs, including one for LGBT youth, supporting the city's diverse youth community.

When Culture Speaks is produced by the center. The center has supported Kambi Moto since 2018.