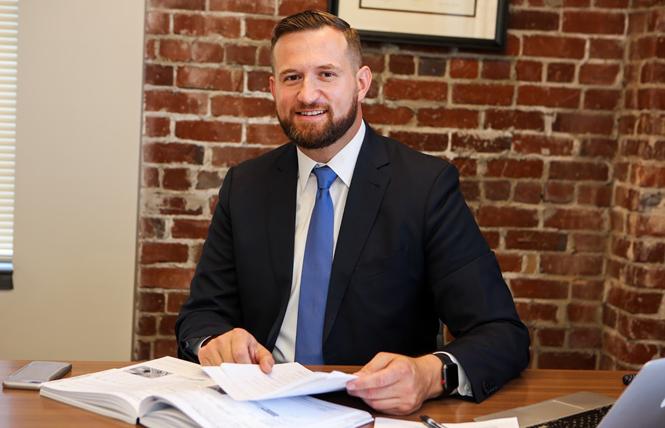 Over the last year gay Sacramento City Councilman Steve Hansen has found himself responding to several controversies that sparked ire within the state capital's LGBT community. Last June, he mediated a deal between the organizers of his city's annual Pride parade and its police department that overturned an initial ban against officers marching in their uniforms.

And in the fall he pledged to help Broadway Sacramento find a different naming sponsor for its downtown theater if it cut ties with Dignity Health. Evan Minton, a transgender man who is suing the Catholic health care provider for denying him a hysterectomy two days prior to the surgery, and other LGBT community members successfully called on the theater group to rescind the naming-rights deal after it was announced.

"I think Dignity Health needs to change its policies," Hansen, who has long been friends with Minton, told the Bay Area Reporter this month. "I grew up Catholic. I know they are trying to hold to a certain Catholic ideology. But when you are under the knife for surgery, you don't expect the doctor to pull the plug at the last minute because you are different."

As his city's only LGBT city council member — in 2012 he became the first out person to win election to the council — Hansen has made addressing issues of concern within the LGBT community a high priority. He fought to get funding so Sacramento's LGBT Community Center, which puts on the annual Pride festivities, could buy its new permanent home.

Hansen, 40, has also championed the affordable housing development for LGBT seniors called Lavender Courtyard. He fought to secure city funding for the 53-unit project being overseen by Mutual Housing California, which is close to having the financing it needs to start construction.

He hopes to continue to be a voice for the LGBT community at City Hall through 2024, as Hansen is seeking a third four-year term on the March 3 primary ballot. Hansen told the B.A.R. that if he is elected again to his District 4 council seat then he will continue to be the lone LGBT council member, as he is the only out candidate running for one of four council seats this year.

"If I lose, we lose our representation. And as we know, representation is power," noted Hansen, who last summer announced he and his partner, Michael McNulty, had legally adopted their son, Henry Benjamin Hansen McNulty. "Who gets called in the middle of the night if there is a hate crime against an LGBT person? Who is going to make sure the police and other agencies take it seriously?"

He is being challenged this year by environmental policy adviser Katie Valenzuela, 34, who has made rising rents and home prices in Sacramento a main focus of her campaign. She secured the endorsement of the local Democratic Party and a number of local Democratic clubs. She is the policy and political director for the California Environmental Justice Alliance and serves on the incorporating board of the Sacramento Community Land Trust.

"We are experiencing unprecedented housing prices and an unacceptable number of our neighbors are homeless," notes Valenzuela on her campaign site. "We also have opportunities to lead on climate and help our small businesses thrive, and get more people engaged in local policies and budgets. I'm running because I think this is the right time for Sacramento to show that it is possible to preserve our communities while creating opportunities for everyone to thrive."

Backing Hansen is Sacramento Mayor Darrell Steinberg and most of his fellow council colleagues in addition to a host of other local elected leaders. Last week, the Sacramento Bee's editorial board came out with a strong endorsement for Hansen, arguing he "gets things done for District 4, and for the city as a whole."

In response to criticisms that he hasn't done enough to address rising housing costs in his district centered in Sacramento's downtown or in the city as a whole, Hansen points to the Tenant Protection and Relief Act he helped craft and get passed last year. It limited how much landlords can raise rents each year and placed restrictions on their ability to evict tenants, while also establishing a process for how tenants can fight excessive rent increases or wrongful evictions.

"There is no one on the council who has championed affordable housing like I have," said Hansen. "The biggest thing I am working on, honestly, is homelessness. It is a crisis in Sacramento like in other places."

He hopes voters will give him another four years to continue addressing a host of issues such as housing, transit, and climate change.

"We are making a lot of progress and we need to make sure we don't turn back. We have to keep moving forward," said Hansen.