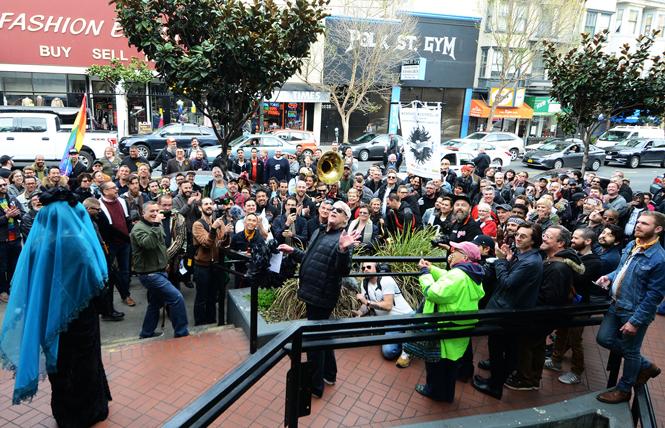 Cleve Jones, center, remembers meeting Sylvester on his first day in San Francisco at The Haven, a gay-oriented restaurant formerly at the corner of Polk and California streets, during a "March to Remember and Reclaim Queer Space" in the Polk Gulch area in March 2018. Drag queen Juanita MORE! is at left in blue veil. Photo: Rick Gerharter

"At a time when LGBTQ rights are again under attack by our president and conservative politicians, reclaiming and fortifying queer space is more important than ever," MORE! wrote in an email to supporters. "That includes affordable housing and affordable commercial space for our queer community to live and thrive."

MORE! is expected to be joined by LGBTQ leaders, representatives of neighborhood organizations, historians, activists, and community members.

Participants will lay black wreaths at the sites of shuttered queer spaces in the historic Castro district. They will also call on elected leaders, foundations and philanthropists, venture capitalists, and residents to both commemorate the city's vibrant LGBTQ past and inspire a brighter future.

MORE! led a similar pilgrimage in the Polk Gulch neighborhood in March 2018. The area had been an early LGBT neighborhood and was once home to many gay bars and other businesses.

According to MORE!'s email, the march will end at the Lookout bar, 3600 16th Street.

Besties voting almost over
Bay Area Reporter readers have until Wednesday, March 4, at 11:59 p.m. to vote in the paper's 10th annual readers' poll, the Besties.

People can vote online, at https://www.surveymonkey.com/r/besties2020, in several categories, including arts and culture, nightlife, shopping and services, and travel.

One category, best healthcare provider, was inadvertently left off the print ballot and people can vote online for one of the nominees: Brown and Toland, CPMC/Sutter Health, Kaiser, or UCSF. (Every category also includes a write-in option.)

Those who complete at least 75% of the survey will automatically be eligible for prizes. This year the grand prize is a pair of VIP weekend passes to LA Pride, June 12-14.

Elder abuse forum for LGBTs
Gay former city supervisor and state Assemblyman Tom Ammiano and Tim Wolfred, a gay man who's a former City College of San Francisco trustee, have announced a free half-day workshop for LGBTs to protect themselves from elder abuse.

Titled "Fraud, scams? No thank you ma'am," the interactive session will be held Thursday, March 5, from 9:30 a.m. to 1 p.m. at the San Francisco LGBT Community Center, 1800 Market Street.

In a news release, Ammiano and Wolfred wrote that they decided to hold the workshop after hearing stories from close friends who were the victims of financial abuse at the hands of "charming young predators, some losing thousands of dollars."

"We know that lots of people don't know about elder abuse or they don't think if will happen to them," Ammiano stated. "That's what we thought until it happened in our group."

A panel discussion will include Mary Twomey, former co-director of the National Center on Elder Abuse; Daniel Redmond, an attorney at Sideman & Bancroft LLP; Tamari Hedani, associated director, elder abuse prevention program of the Institute on Aging; and Melissa McNair, a victim advocate at the San Francisco District Attorney's office. A representative of the city's Adult Protective Services department is also scheduled to attend.

Wolfred said in the release that he and Ammiano both read up on frauds and scams after it happened to a friend of theirs.

"Now I know the best way to avoid becoming a victim is to know the warning signs, plan ahead, and know where to get help for yourself or your loved one," he stated. "If people come to our forum, they'll leave with lots of information and tools. We want people to leave empowered."

The National Center on Elder Abuse reports that 1 out of every 10 older Americans is a victim of elder abuse. LGBTQI elders may be a greater risk due to factors such as isolation, health issues, and historical trauma.

The event is open to the public.

According to a February 11 release from Newsom's office, Moscone, 55, has been chief producer of Yerba Buena Center for the Arts since 2015. He was artistic director of the California Shakespeare Theater from 2000-2015. He is a member of the Homeless Prenatal Program board of directors and the board of Alice Waters' Edible Schoolyard Project.

Moscone earned a master of fine arts degree in directing from the Yale School of Drama.

The position requires Senate confirmation and the compensation is $100 per diem. Moscone is a Democrat.

Hillis will replace John Rahaim, a gay man who has overseen the department for over a decade and announced his retirement last September. Hillis is expected to start March 9.

Hillis, executive director of the Fort Mason Center for Arts and Culture, last September resigned from the planning panel to be considered for the director position.

In a statement, Breed said that the city's housing shortage has made living in San Francisco "far too expensive" and that many people are being pushed out.

Breed added that Hillis "recognizes that to address this equity issue, we need more housing in San Francisco for families and people of all income levels, and we need that housing built throughout our entire city."

For his part, Hillis said that both the planning commission and the department "face significant and unprecedented challenges, especially around housing affordability, and equity." He said he will bring his "result-focused, collaborative approach" to work with the commission, communities, regional and state partners, and city leaders.

The release stated that Hillis will work to streamline the department's process for entitling new housing and that he is committed to creating new affordable housing without displacing existing tenants or demolishing rent-controlled housing.