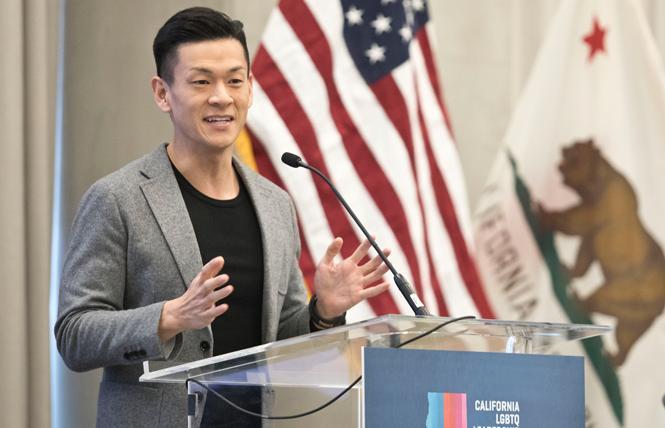 In a cryptic tweet January 13, gay Assemblyman Evan Low (D-Campbell) teased he would announce this week his "new political adventure," leading to speculation perhaps he would be leaving the Legislature for a job in the tech sector or seeking a House seat should his congresswoman, Anna Eshoo, decide to retire.

The answer, however, has nothing to do with his own professional or electoral plans and instead is related to the 2020 race for the White House. Low is endorsing former tech entrepreneur Andrew Yang for president and will serve as his national campaign co-chair.

Low's decision to now throw his support behind Yang, a lawyer turned startup investor, is hardly surprising. His 28th Assembly District seat lies in the heart of Silicon Valley and Low has always been close to the tech sector, having founded the California Legislative Technology and Innovation Caucus in the Legislature.

"Evan is a dynamic and proven leader in the great state of California," stated Yang in announcing Low's endorsement and campaign leadership position Wednesday, January 15. "Time and time again, he has demonstrated his commitment to representing diverse and dynamic voices and enacting policies that make our society more equitable. I am excited to welcome this trailblazer to our team as we work to rewrite the rules of the 21st century for our children."

In a statement, Low credited Yang with proposing "the most innovative solutions to the toughest problems." Prior to running for president, Yang had overseen his nonprofit Venture for America that aims to improve the fortunes of struggling cities. A key part of his presidential platform is to give people a $1,000-a-month basic income that he argues would bolster local economies.

"He inspires a brave, bold new vision for our country," stated Low. "His tenacious presidential campaign performance proves he is the candidate we need to make the current occupant of the White House a one-term president."

He isn't the only Silicon Valley Democrat helping to helm a presidential campaign this year. Congressman Ro Khanna (D-Fremont), whose 17th Congressional District is located in the heart of Silicon Valley, is a campaign co-chair for U.S. Senator Bernie Sanders (I-Vermont).

Low will be joining Yang at an event in San Francisco Thursday evening where he will discuss his role with the campaign and its plan to compete in California's March 3 primary on Super Tuesday. Yang is facing an uphill climb in the Golden State, with a recent analysis by the political news site Capitol Weekly predicting Yang will come out of the primary with none of California's 416 delegates determined by the vote.

And despite raising $16.5 million last quarter for his campaign coffers, Yang has been polling nationally well short of the threshold required to be included in the debates with the other Democratic candidates, such as Tuesday's debate in Des Moines ahead of the Iowa caucuses February 3. In fact, the race is shaping up to be a four-way contest between former Vice President Joseph R. Biden Jr., Sanders, Senator Elizabeth Warren of Massachusetts, and Pete Buttigieg, a gay veteran and the former mayor of South Bend, Indiana.

As far as Low's own political future, he is exploring a run in 2022 for California's secretary of state position, as the incumbent, Alex Padilla, will be termed out in January 2023. A former Campbell City Council member and mayor, Low first won election to his Assembly seat in 2014 and has easily won re-election ever since.

He is expected to easily win re-election to the Assembly this November. Under the state's term limit rules, Low is able to serve in the Assembly through 2026.

Should he run for the statewide post, Low would be the third gay man to do so. Fellow Democrat Tony Miller, a gay man and lawyer, was appointed secretary of state in 1994 but was defeated in his bid for the seat in that November's election. Libertarian Party candidate Richard Winger, a gay San Francisco resident, lost his bid for the position in 1986, but he didn't run as an out candidate.

In response to the B.A.R.'s questions about his future political plans, Low avoided commenting about the speculation he would run for secretary of state. Instead, he shared an embargoed copy of the announcement of his endorsement for Yang and decision to co-chair his campaign.