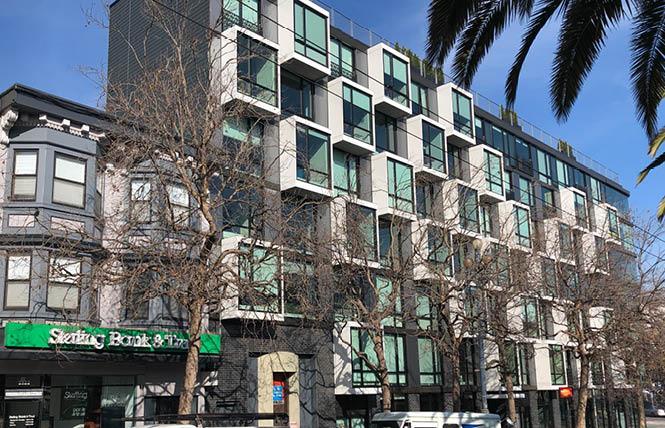 Sterling Bank & Trust won approval Thursday to relocate its Castro branch into a prominent corner retail space on upper Market Street. It pledged it would enliven the area at the intersection of Market, Church and 14th streets rather than turn it into a dead zone at night or on weekends.

With its lease at 2122 Market Street set to expire, the bank plans to move next door into a 2,999 square foot storefront at 2100 Market Street. Because it has more than 11 branches, Sterling Bank is considered a formula retailer and needed a conditional use permit in order to relocate the branch.

To do so, the San Francisco-based financial institution overcame objections from some in the neighborhood who preferred seeing a restaurant occupy the storefront, as well as a recommendation from city planners that its permit request be denied due to an over concentration of formula retailers in the vicinity.

The city's planning commission instead voted 6-0 to support the bank's relocation request. The members of the oversight body were persuaded by the fact that Sterling Bank isn't a megabank and has been a member of the Castro community for years.

"If this was Chase asking me, I would support the department's recommendation of saying no. The deadening of retail areas by banks at night is devastating," said Planning Xommissioner Kathrin Moore.

Commission Vice President Joel Koppel, who works nearby, noted, "This area is in dire need of filled storefronts."

It was an argument that Walter Parsley, Sterling Bank's attorney, made to the commission, pointing out there are currently more vacancies near the bank branch than there are formula retailers along that stretch of upper Market Street. Planning staff pegged the number of vacancies at 10, with six chain businesses operating within a 300-foot radius of the retail space Sterling is moving into.

"Sterling does not seek to establish a new formula retail use, they have been there 24 years. But their lease is up and they need to move, literally next door," said Parsley, who also lives nearby.

Steve Adams, a senior vice president and managing director at Sterling Bank, noted how both he and the company have deep roots in the community. Adams, a gay man and former president of the Castro Merchants neighborhood association, is president of the city's small business commission.

"We are involved in the community. I don't want to leave the neighborhood," he said. "I paid my dues and I want to continue to pay my dues in that neighborhood."

The branch's employees will be working in the evening, noted Adams, and it will have a community room that local nonprofits and residential groups will be able to use for nighttime meetings or on weekends.

"So there will be nighttime activity in that space," said Adams.

He also pointed to how Sterling Bank is the primary lender and bank for people living in the city's single-room-occupancy hotels through the Bank on San Francisco program.

Nonetheless, Sterling Bank is deemed a formula retailer under the city's rules and ran up against restrictive zoning aimed at preventing too many chain retailers setting up shop along upper Market Street. The rules were put into place years ago following neighborhood uproars over a planned Starbucks on the commercial corridor that was ultimately rejected by the planning commission, and complaints at seeing Bank of the West move into a prominent corner location at 16th, Market and Noe Streets since it does little to draw foot traffic when it is closed at night and on Sundays.

Under the rules, if a retail applicant brings the formula retail concentration within a 300-foot radius of where it wants to open on upper Market Street to a concentration of 20% or above, the planning department staff is required to recommend disapproval of the application to the Planning Commission. In addition to Sterling Bank's existing branch on the 2100 block of Market Street, there is also a Verve coffeehouse, a Crossroads Trading used clothing store, a Walgreens pharmacy and store, and a 24-Hour Fitness gym. Also within the radial area is a Compass real estate office, while just outside it is a Safeway grocery store and Ace Hardware.

But at the hearing, outgoing planning director John Rahaim, a gay man set to resign once his replacement is announced, acknowledged that the retail environment had changed significantly since the city put in place the additional scrutiny of formula retailers along upper Market Street. He suggested it might be time to re-examine the restrictions.

"It doesn't bind the commission in any way," said Rahaim. "But it does speak to the point of the nature of retail is changing really quickly. The process of changing the zoning code doesn't happen as quickly, as you all know."

According to the staff report, the planning department received letters in support of Sterling Bank's branch relocation from the Castro Merchants, the Castro/Upper Market Community Benefit District, and the Eureka Valley Neighborhood Association.

In comments submitted to the commission at the hearing, CBD Executive Director Andrea Aiello noted how the area has seen a number of restaurants close and those that are opening are looking for smaller spaces and utilizing a fast-casual format rather than a large dining room as would be required with the space Sterling wants to occupy.

"Not allowing Sterling to move to this spot would create a long term vacancy," stated Aiello.

Castro resident Robert Sammons, who serves on the CBD's retail committee, echoed that sentiment in his remarks.

"Vacancies are a challenge, no doubt about it," said Sammons, a regional director at Cushman & Wakefield. "We need more retail however we can get it."

Meanwhile, nine nearby residents and the Duboce Triangle Neighborhood Association sent in letters of opposition. But no one spoke in opposition to Sterling Bank's permit request at the hearing.

In its October/November newsletter DTNA explained that it was opposed to seeing Sterling Bank move into the new retail space because when local developer Brian Spiers sought its approval for his development he had promised "that the main corner retail space would be built out and rented as a restaurant, and that the two small retail spaces on 14th Street would be rented to local businesses at reasonable rates, Spiers reversed on that and is now attempting to gain approval to use the entire bottom floor for another corporate client (a bank)."

The mixed-use building, which opened in September, had generated community consternation after it was learned last summer that Spiers had entered into an agreement with the San Francisco-based startup Sonder to lease its 52 market-rate apartments as furnished extended-stay units. The move was seen as favoring businesses that can afford to rent expensive apartments for their employees on a short-term basis rather than providing long-term homes for people who want to become residents of the city's LGBT neighborhood.

Meanwhile, the residents of the eight on-site affordable apartments were determined by a lottery the city conducted Tuesday, January 7.