by Pau Crego and Clair Farley 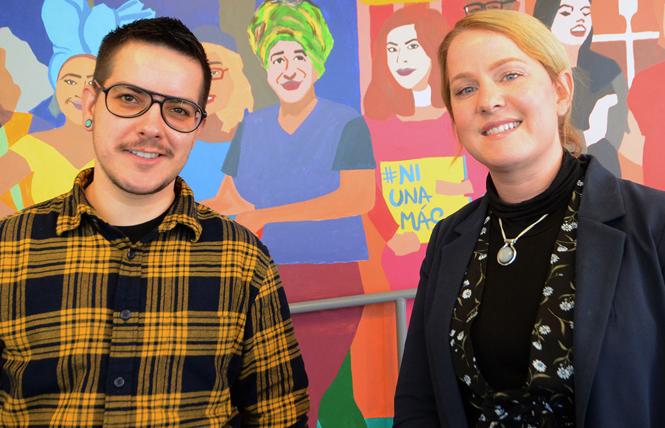 In 2016, gay then-Supervisor Scott Wiener led the charge to require improved data collection on our local LGBTQ+ communities to measure equity and inclusion in city services. This legislation required six departments in the City and County of San Francisco and their grantees to collect sexual orientation and gender identity (SOGI) data on their clients, and to report this data annually.

Upon taking office, gay current District 8 Supervisor Rafael Mandelman took on the mantle to ensure the city collects, reports, and uses SOGI data meaningfully to count and account for LGBTQ+ communities. This November the Board of Supervisors held a hearing to discuss the city's progress on SOGI implementation and to report findings from fiscal year 2018-2019. City departments presented data on the proportion of LGBTQ+ clients utilizing their services, identified program areas that appear to underserve LGBTQ+ clients, and outlined plans to address the barriers experienced by LGBTQ+ communities in accessing their programs. This hearing, and the SOGI reports from the past fiscal year, highlighted some important lessons and areas for growth for the city. Undoubtedly, they served as a reminder of why being counted matters. (The Bay Area Reporter has extensively covered the SOGI process.)

The 2018-19 SOGI data established that LGBTQ+ people are best served by programs that include and reflect us, meaning services that explicitly engage LGBTQ+ people and that are staffed by our communities. For instance, of all the clients that the Mayor's Office of Housing and Community Development programs served, 11.80% identified as LGBTQ+. However, of all clients served by MOHCD's LGBTQ+-focused programs, 45.84% were LGBTQ+ (and some programs served 100% LGBTQ+ clients). The Department of Children, Youth, and their Families data corroborated this: LGBTQ+ transitional age youth are more likely to participate in LGBTQ+ programming. Furthermore, while general services tend to serve few LGBTQ+ clients, LGBTQ+-focused programs serve many non-LGBTQ+ clients (in the MOHCD example, 54.16% of clients accessing LGBTQ+-focused services did not identify as LGBTQ+ or declined to state). Thus, LGBTQ+-focused programs perform better than general services in engaging people of all sexual orientations and gender identities.

The SOGI reports also documented differences in service utilization among subgroups, in particular between cisgender LGBQ+ people and transgender and gender-nonconforming people. Despite being a smaller community, TGNC people experience higher needs for services because inequities in all life areas conspire to make us deeply vulnerable. TGNC San Franciscans are almost 18 times more likely to experience homelessness than the general population (15% compared to 0.85%). We are also less likely than cisgender LGBQ+ people to afford basic needs, such as food, transportation costs, and medicine. Yet the SOGI data did not reflect this: for instance, of all clients served by the Department of Homelessness and Supportive Housing programs that collected SOGI data, only 1.35% identified as TGNC — which closely matches estimates for the proportion of TGNC people, but is incongruent with the high rates of TGNC homelessness. This trend, of TGNC people experiencing extreme needs for services but not being able to adequately access them, was reflected in most SOGI reports.

Similarly, HSH's 2019 Point-in-Time Report noted that 27% of people experiencing homelessness identify as LGBTQ+, but as with TGNC people, the number of LGBTQ+ people served by HSH programs does not reflect these inequities (only 14.43% of HSH clients identified as LGBTQ+). Despite these discouraging numbers, at the hearing HSH shared hopeful updates regarding its progress on integrating LGBTQ+ equity into the housing referral assessments: an early analysis suggests that LGBQ+ adults who receive initial assessments are 20% more likely to be prioritized for housing, and that TGNC transitional age youth are 53% more likely to be prioritized for housing. (These assessments do not prioritize LGBTQ+ identities, but other vulnerability factors that impact LGBTQ+ people at higher rates.) In addition to improving general services to make them attainable, these differing levels of utilization across LGBTQ+ communities speak to the value of community-specific initiatives to help us tilt the scale by prioritizing those most impacted and with fewest options.

Additionally, all city departments underscored challenges in collecting accurate data and using them meaningfully for service improvement, such as capacity limitations, complicated data systems that hinder data comparisons, and a need for training on LGBTQ+ issues. Our local efforts come up against the unfortunate reality that there is such a dearth of data on LGBTQ+ communities and the issues we face — in particular on LGBTQ+ communities of color, transgender communities, immigrants, people with disabilities, and other uniquely vulnerable communities — that SOGI data becomes all the more pressing. Indeed, many data collection initiatives do not adequately count our LGBTQ+ identities, yet are used to make decisions that greatly impact our lives. A major and timely example is the 2020 census. Although it should count LGBTQ+ identities better than it does, the census remains crucial for our communities. The 2020 census captures other identities, is used to allocate resources (for schools, health programs, social assistance programs, and more), and determines the number of members of Congress that California has in the House of Representatives and the number of votes the state has in the Electoral College. In imperfect systems, we must be counted in every way possible.

While there is much to be done, we look forward to working with Mandelman, city departments, and community-based organizations toward more and better LGBTQ+ data in San Francisco — because we deserve to be counted.

Learn how to ensure all San Francisco residents are counted in the 2020 census by following the San Francisco Office of Civic Engagement and Immigrant Affairs on Facebook, Instagram, and Twitter (https://twitter.com/OCEIA_SF). Text COUNT to 415-340-7170 for reminders about participating in the census this spring.

Pau Crego is deputy director at the San Francisco Office of Transgender Initiatives; Clair Farley is director of the office.