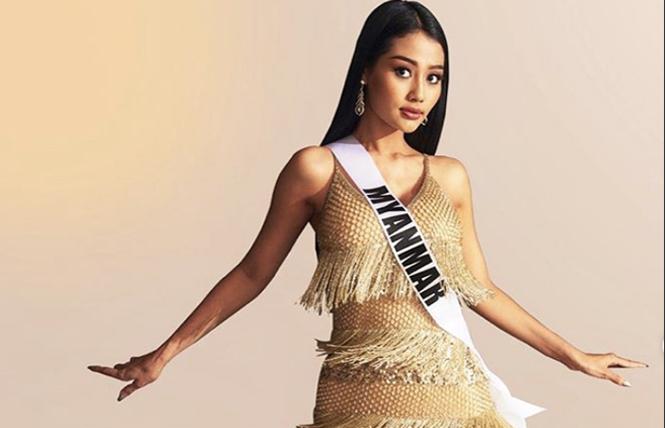 But days before Htet, 21, took the stage, she came out, making her the first-ever openly lesbian contestant in the pageant's history.

"I have that platform that, if I say that I'm a lesbian, it will have a big impact on the LGBTQ community back in Burma," Htet, who is also a singer and actress, told People magazine through a translator in Atlanta. (Myanmar is formerly known as Burma.)

"The difficult thing is that in Burma, LGBTQ people are not accepted," said Htet, "they are looked down on by other people and are being discriminated against."

Homosexuality is illegal in Myanmar, however, in recent years support for the LGBT community has been growing.

Htet, who is in a three-year relationship with a famous Burmese singer Gae Gae, first publicly came out on a beauty blog Missology November 29. She hopes to change the stigma against LGBT people in Myanmar through her public coming out and future advocacy, she said.

Since coming out, she's received a lot of support from her fans, fellow pageant contestants and organizers, and LGBT community members and allies from all over the world.

"I'm very happy about that," she said. "Love is the basic thing. It's more about loving another person, no matter who that person is. It's coming from the heart."

In an email statement to People, Paula Shugart, president of the Miss Universe Organization, wrote that the pageant organization was "honored to give a platform to strong, inspirational women like Miss Universe Myanmar, who are brave enough to share their unique stories with the world.

"Miss Universe will always champion women to be proud of who they are," she added.

Chinese trans woman's bias case moves forward
A transgender woman is the latest person leading the charge for LGBT employment rights in China by becoming the second such individual to sue her employer for employment discrimination.

Last week, a judge in the eastern Chinese city of Hangzhou agreed to allow the transgender woman's case to move forward.

Identified only as Ma, a former production assistant for Hangzhou-based Ciyuan Culture, an online cosplay-platform operator, she claimed in the complaint she filed in August that her former employer discriminated against her for her gender following returning to work after undergoing sex reassignment surgery in Thailand, reported Caixin Global.

Cosplay is a performance art where players embody characters from science fiction and fantasy. It is often based on characters from anime, comics, manga, video games, TV shows, and more. People dress up in costumes of their favorite character.

Ciyuan Culture approved Ma's unpaid leave for her surgery in October 2018 and it used to offer an LGBT-friendly workplace, she told Caixin.

However, when she returned to her job, the company began penalizing her for her "health condition" as grounds for being "unsuitable to work with clients."

Managers also told her that she was unsuitable to work with her co-workers of either gender or play with other cosplayers.

In February, the company fired her, claiming she violated attendance policies.

Ma, 31, claims she never received a warning for her attendance. She was only provided the attendance policy and procedures after she was fired.

A local government labor arbitration panel ordered the company to pay Ma the sum equal to two and half times her monthly salary in June. However, the panel didn't examine the gender aspect of Ma's case, reported Caixin.

She is now seeking an apology from her former employer along with 10,000 yuan ($1,420) in compensation and all court fees.

In 2017, a transgender man was awarded compensation for being unfairly dismissed by his company. The court didn't rule on whether he had been discriminated against based on his gender identity.

Ma said that she decided to take her case to court based on the alleged gender discrimination aspect.

If she wins, it will be a landmark case.

It's illegal for companies to discriminate on grounds of gender in China. However, Caixin reported that the law is unevenly applied when it comes to extending gender protections to transgender people, according to a 2018 report by the United Nations Development Programme and China Women's University.

Ma is utilizing a 2018 ruling by China's Supreme People's Court, the nation's highest court, which allows individuals to sue their employers for violations of equal employment rights.

Caixin reported that a survey examining China's transgender employment discovered that out of 2,060 respondents, there was an 11.87% unemployment rate among transgender individuals compared to a 3.97% urban unemployment rate. The report was published by the Chinese Ministry of Human Resources and Social Security.

The report was in line with a 2017 nationwide survey on China's transgender population conducted by the Beijing LGBT Center and Peking University's department of sociology. The survey found that transgender people in China generally still face a harsh employment market and struggle to find work. The survey also found that many transgender individuals have higher rates of self-employment.

Feng Zhuofan, executive director of Voice of Trans, a transgender rights organization, hopes Ma's case encourages "more people from the community to speak out," as some transgender people go on to live their lives in the gender they transitioned to "hesitant to expose their transgender identities," he said.

A verdict is expected in the coming months.