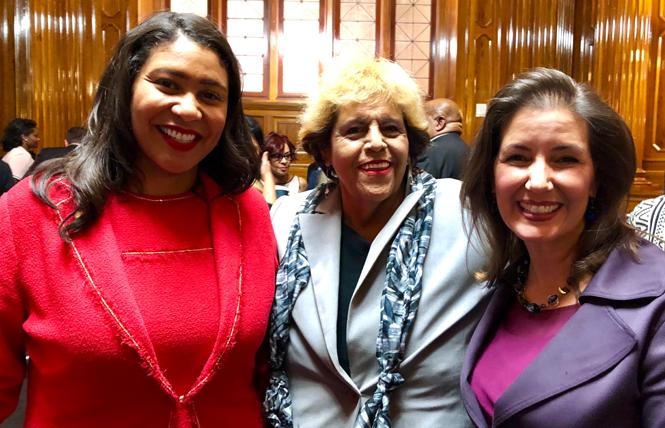 Bianca Lucrecia, center, worked with San Francisco Mayor London Breed, left, and Oakland Mayor Libby Schaaf during her years as an activist in the LGBT community.

Ms. Lucrecia died of pneumonia and complications of liver cancer November 2. She was 66 and awaiting a lifesaving liver transplant that was to take place at UCSF.

As a trans woman of color, Ms. Lucrecia was involved in many transformative moments in the LGBT community's history, including fighting murder and hate crimes against trans women and fighting President Donald Trump's ban of transgender people from serving in the military.

"We can't let the Trump administration try to erase us off the face of this Earth; it's just not going to happen," Ms. Lucrecia said at a trans equality rally in 2018. "I'm here to fight for everyone's rights."

She also opposed the Trump administration's rollbacks in protections for trans people in health care and homeless shelters, and the termination of the federal Department of Education's guidance encouraging schools to support the gender identities of students.

Ms. Lucrecia was an accomplished hairstylist who coiffed many politicians and celebrities, including Sylvester, the 1970s and 1980s gay disco and R&B recording artist who passed away in 1988.

According to an obituary prepared by friends, Ms. Lucrecia began her activism prior to her transition when she worked in the fields picking grapes and supported UFW's grape boycott. After her transition, she fought with Harvey Milk against Anita Bryant's anti-gay initiative in Florida and the Briggs initiative in California, which would have barred gays and lesbians from teaching in public schools.

In 2013, she co-founded and organized the first LGBT Freedom Day parade in Tucson.