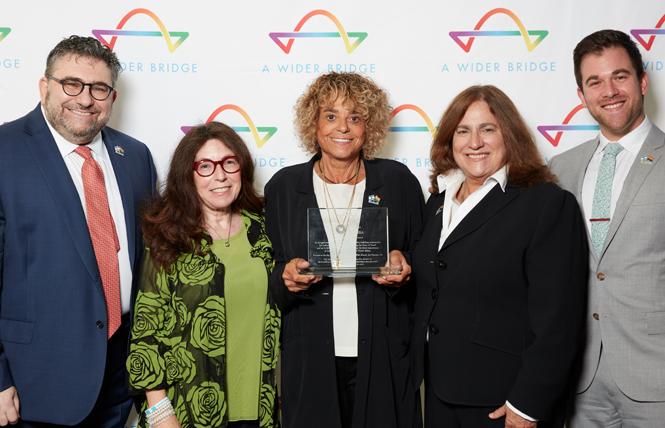 Lesbian travel leader honored by A Wider Bridge
by Heather Cassell
Rachel Wahba humbly stood on the stage Sunday as she accepted an award for her work advancing LGBT, Jewish, and Israeli rights from A Wider Bridge.

A crowd of 250 Jewish community leaders and allies applauded her as she received the LGBTQ Trailblazer Award from her longtime business partner, Judy Dlugacz, at the November 3 brunch at the St. Regis Hotel in San Francisco.

Dlugacz and Wahba expressed their delight that women seemed to make up about half of the audience.

"Traditionally, lesbians [and] Jewish women have kept to themselves. They've shied away from being with gay men and they ... don't understand Zionism," Wahba told the Bay Area Reporter when asked about the importance of honoring Jewish lesbian leadership. "We cannot be in our separate little tents. We need to work together."

Zack Bodner, an ally, was also honored with the Champion Ally Award by the organization.

"Rachel, your story gives me so much hope and strength," he said from the stage. "We need more voices like yours.

"It's my hope through the work that we are all doing together that we can continue to build up the narrative not only of queer Zionist women, but also Jews of color of all stripes," he continued. "We need to make sure that our Jewish community is diverse as possible if we are truly going to win this fight."

A Wider Bridge is a $1.5 million organization that fosters relationships among U.S. and Israeli LGBT Jewish and ally communities to advocate for LGBT rights in Israel.

The organization was founded in San Francisco but is now based in New York.

The admiration was mutual. Wahba praised A Wider Bridge for its work and making Jews like her feel empowered.

"[A Wider Bridge] has my back," she said. "I can be more vocal and stronger because they exist."

That wasn't always the case. The gold Star of David necklace that she has had since childhood and that continues to hang around her neck identifying her Jewish heritage has made her a target for anti-Semitism and anti-Zionist attacks, she said.

Wahba, an Egyptian-Iraqi lesbian Jew, was born in India and spent her formative years stateless with her family in Japan after the Egyptian government revoked the passports for all Jews living abroad. She said that she understands the need for a Jewish state more than anyone.

In introducing her, Dlugacz said that Wahba eventually made it to the United States as a refugee with only Red Cross paperwork and joined San Francisco's lesbian-feminist separatist movement in the 1970s. Professionally, Wahba became a psychotherapist.

Dlugacz said Wahba's honor from A Wider Bridge is "such a long time in coming because of how much effort she has made to really teach this community about the Jews from Arab countries."

"There is so little understanding about what happened in terms of the history of Israel and Arab Jews," she said, talking about how Israel took in all of the expelled Jews from Arab nations and the Beta Israel, the black Jews of Ethiopia.

Wahba's past isn't forgotten; she records the history of Jews who once lived in Arabic countries on her blog. Her lived experience is her passion. Her humility faded away instantly once she began speaking about her own struggle as a woman who loves Israel.

Honored
Being recognized for her work by an organization she admires was so unexpected it overwhelmed and humbled her, she said.

"It's a bit daunting, but way cool. This is way, way cool, seeing all of you," she said to the applauding crowed, peering out at them through her sunglasses while holding a glass plaque.

In the 1970s, it wasn't easy being a supporter of Israel and being a proud lesbian-feminist Jewish woman, even while attending an American Catholic missionary school in Japan.

However, that gold star that hangs around her neck attracted Dlugacz at a party. It was a meeting of minds and love for each other and Israel once Wahba realized she found her match.

The women were business and life partners for 30 years until the romantic relationship dissolved a decade ago, but their devotion to each other as family, their business, and Israel hasn't ended.

In 2017, Olivia partnered with A Wider Bridge, taking their travelers on a journey across the Land of Milk and Honey. Wahba announced at the brunch that Olivia will once again sail into Tel Aviv's port for another journey into the Holy Land with the organization in October 2020.

Despite the unusually warm November day in San Francisco a cloud was hanging over the festivities. Ongoing threats presented by rising anti-Israeli and anti-Semitism around the world loomed. The influence of the Boycott, Divestment, and Sanctions Movement, which raises awareness internationally of Israel's oppression of Palestinians, has also been growing.

"I don't need to tell anyone here in the room we live in a time of unprecedented rise in global hate global, global anti-Semitism, and anti-Israel hate," Alan Schwartz, A Wider Bridge's board chair, told the attendees.

A Wider Bridge offers a safe space for Jews and their friends who support Israel to come together to "transcend the polarizing and often toxic environment in times that we are living today," he continued.

"We thrive as a people because we have Israel," Wahba reminded the audience.

"We could never, in a world ingrained with anti-Semitism, take Israel for granted," she said. "If we cannot take LGBT equality for granted, how can we take Jewish liberation for granted?"

Israel, which is about the size of New Jersey, is home to about half of the world's Jews, said Dlugacz.

In her mind, Israel is a small country that continues to fight for its existence to be a safe haven for Jews.

"Israel is an amazing, amazing story and it has been misunderstood and misinterpreted by the lesbian community," Dlugacz said. "It's very hard to not have that support from our own community, so we are constantly struggling with that."

She said that Israel is the only place in the Middle East where queer people have rights and there is "a vibrant LGBTQ community."

"Every place else quite frankly, LGBTs, particularly gay men and lesbians, are being killed. Literally, being killed for literally being who they are and for being out," Dlugacz said.

Building a stronger LGBT Israeli community
A Wider Bridge's goal is to continue strengthening LGBT Jews and allies' connection to Israel's LGBT community and to advance queer rights in the Middle Eastern country.

An estimated $250,000 was raised at the gala for the organization's Impact Grants that aid LGBT organizations in Israel, according to Ronit Bezalel, communications director for A Wider Bridge.

The funds will benefit the organizations A Wider Bridge connects with during its educational trips.

For more information or to make a donation, visit www.awiderbridge.org