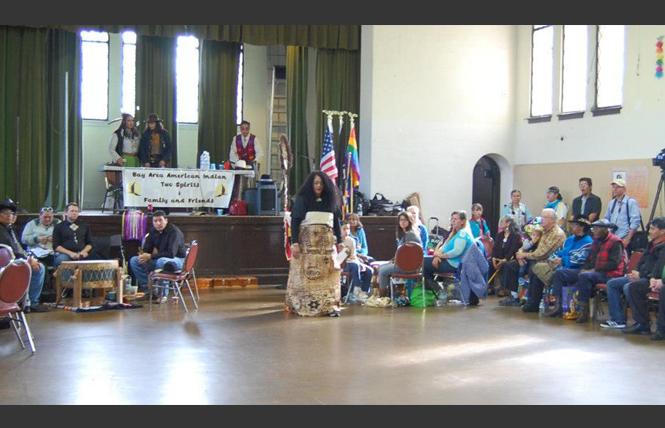 One of the most moving segments in "Two-Spirit Powwow," Rick Bacigalupi's new documentary that will have its broadcast premiere on two local public television stations this month, is the sequence when Sheldon Raymore, a young Native American gay man, introduces his mother at a powwow hosted by Bay Area American Indian Two Spirits.

Raymore's mom came to the powwow to show support for her son, which she does in defiance of their Native culture, which isn't always accepting of two-spirit people. As another gay Native man points out in the film, the rise of Christianity in Native culture has seen an increase in conservative attitudes among some Native peoples.

"Two-Spirit Powwow" documents the annual celebrations hosted by BAAITS in the Bay Area. The film is a fascinating look inside a culture and an aspect of LGBTQI life that many in the community know little about.

The local showings are part of the stations' Native American Heritage Month programming.

"A powwow is an intertribal event that celebrates indigenous heritage through song, dance, culture, tradition, and most importantly, community," Roger Kuhn of BAAITS told the Bay Area Reporter. "The BAAITS powwow is modeled after an Oklahoma-styled powwow." Kuhn, 43, is a two-spirit man who is a member of the Poarch Creek Tribe.

According to Kuhn, the term two spirit came about in 1990 after a group of indigenous activists and artists came together to push back against colonial terminology that misrepresented gender and sexual variance in indigenous communities in the United States and Canada.

The 45-minute film offers candid footage shot at various BAAITS powwows, where people dance, don their Native clothing, play drums and chant, and perform funny original songs — one Native man points out that humor is very important in Native culture because Native peoples have had so many bad things happen to them. Interviewees speak eloquently about how much being part of the two-spirit powwows means to them, and of the sometimes uphill battles fought to get mainstream Natives to accept two-spirit communities.

Bacigalupi, a 57-year-old gay man, is not two spirit. He told the B.A.R. that he wanted to get away from the limited dimensions with which the media often frames Native communities.

"In addition to being very spiritually grounded events, which is not shown in the movie, powwows are vibrant, fun, filled with community feeling and humor," he said, "with incredible live music and tasty food and exciting dance competitions. I wanted to try to show all of that in a way that was accessible and easy for a mainstream audience."

Bacigalupi hopes that the film will help to spread awareness in all communities.

"There are many nuanced meanings that different tribal groups ascribe to two spirit," he explained. "To state the obvious, this is not a label that can be exported from its cultural context. Non-natives are not two spirit. The documentary subjects say that recognition is being reestablished within tribal communities, but that colonization introduced prejudices that still exist."

The filmmaker invites people to tune in and understand more about Native culture.

"Learn more about a lesser known dimension of the extraordinary people who were here first and who are hosting all the rest of us," he said. "Some viewers may be of Native heritage themselves but not know about this aspect of their own roots. I would ask them to check out the amazing pan tribal diversity that the two-spirit community encompasses."

"Two-Spirit Powwow" airs on KPJK-TV Wednesday, November 13, at 7 p.m. and on KRCB-TV Tuesday, November 19, at 9 p.m. and again Thursday, November 21, at noon. Both stations are available over the air, and via Comcast, Dish Network, DirecTV and AT&T Uverse. For channel information, visit www.norcalpublicmedia.org