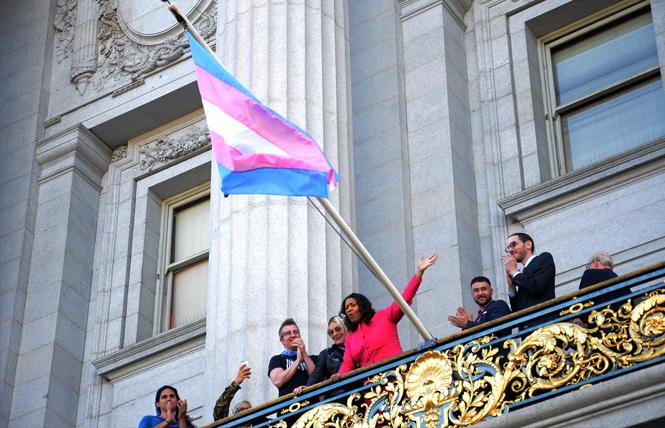 City Hall was lit in the pink, light blue, and white colors of the trans flag Friday evening.

UCSF building campaign to reduce HIV stigma
UCSF, in conjunction with the city's Getting to Zero campaign to dramatically reduce HIV transmission and the San Francisco Department of Public Health, is seeking participants for its SF Loves campaign.

The goal of the campaign is to celebrate the progressive heritage of San Francisco and expand the conversation about HIV within the city's stigmatized communities. SF Love is a dialogue that integrates a celebration of love and connection and what it takes to live a full and courageous live.

Participants are needed during the week of November 11. The deadline is Friday, November 8. Those selected will receive a stipend of $100 for their participation. Interested people should contact recruiting@510media.com

In San Jose, the Billy DeFrank LGBTQ Community Center will have a contingent in the parade, which takes place Monday, November 11, beginning at noon. The parade is near the SAP Center, 525 West Santa Clara Street in San Jose. The DeFrank center is entry 64 and will be staging on Delmas Avenue, west side parking lot, beginning at 11:15.

People are asked to support trans people in the military and can bring trans flags and friends, organizers said.

Lavender Seniors marks 25 years
Lavender Seniors of the East Bay will mark 25 years with a celebration and fundraiser Saturday, November 9, from 11:30 a.m. to 3:30 p.m. at Eve's Waterfront Restaurant, 15 Embarcadero West in Oakland.

There will be a no host bar.

Tickets are $25 and are available through the organization's website at www.lavenderseniors.org/25years

Tickets will not be available at the door.

In an announcement on its website, the center noted that its first fellow, Mason J., will finish their term at the end of November.

The right candidate will work to dramatically expand awareness and use of the community collection of LGBTQIA history and culture.

For more information and to download the application, go to https://www.friendssfpl.org/hormel.html

The deadline is December 2.

In a news release, the mayor's office noted that demand exceeds the number of toys collected each year, especially for older kids. When people are out shopping, they can pick up something extra for a child in need and drop off a new, unwrapped toy at one of many collection sites that will be open until December 9.

For a list of drop-off locations or to contribute, visit https://www.oaklandca.gov/topics/city-of-oakland-community-toy-drive

AIDS grove names scholarship winners
The Pedro Zamora Young Leaders Scholarship, a program of the National AIDS Memorial Grove, has announced that it has awarded 10 undergraduate students a total of $50,000 in financial scholarships for the 2019-2020 school year.

Named in honor of the late AIDS educator and reality TV pioneer, the scholarship provides financial support for young leaders who carry the torch of activists like Zamora and mitigate the impact of the HIV/AIDS epidemic in its current form — in ways inspired by their own passions, insights, originality, and conviction.

The students, attending universities in 10 states, will each receive $5,000 to support their educational goals. They will be honored on World AIDS Day at a ceremony at the AIDS grove in San Francisco.

The scholarship recipients are: Makayla Dawkins, a freshman at the University of Connecticut, who is majoring in public health and helped create the first gay-straight alliance at her high school; Gray Gautereaux, a senior at Willamette University in Oregon, who is the first three-time recipient of the scholarship and will graduate as an HIV/AIDS community health educator and plans to work covering LGBT issues for the Reno News and Review; Bailey Holmes-Spencer, a senior at Spelman College in Atlanta, who is studying sociology and is dedicated to the health and well-being of African American women in her community; and Bo Hwang, a post-baccalaureate student at UCLA, who hopes to use scientific research to uplift communities of color affected by HIV/AIDS.

Other awardees are: D'Andre Manlove, a freshman at Xavier University in New Orleans, who did a yearlong research project on AIDS and the negative stigmas surrounding getting tested; Ariel Sabillon, a senior at Florida State University, who is focusing on HIV anti-criminalization activism; Jennifer Salazar, a junior at the University of Utah, who co-founded a queer transgender people of color sexual health organization; Ervin Simmons, a senior at Syracuse University, who aspires to earn a Ph.D. in clinical psychology, specializing in HIV-related risk behavior; Jariatu Sta'Llone, a sophomore at the University of Pittsburgh-Bradford, who is pursuing a career in medical journalism; and Cindy Won, a junior at Brown University, who is an emerging infectious diseases scholar working to further her studies on HIV/AIDS.

John Cunningham, executive director of the AIDS grove, said that major funding for this year's scholarships comes from Gilead Sciences and Wells Fargo.