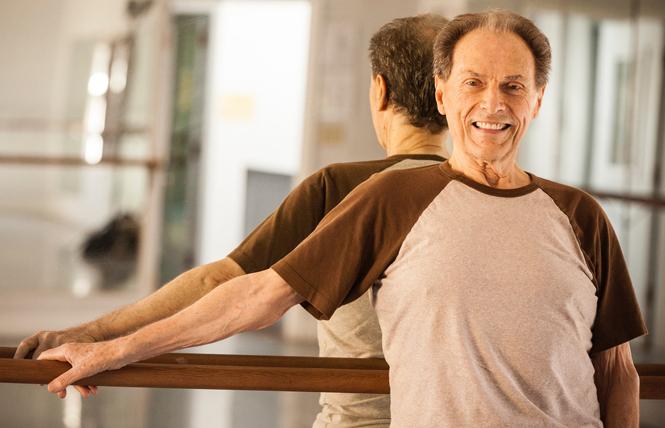 Frank William Shawl, a gay man who was dance artist, educator, and co-founder, along with the late Victor Anderson, of Shawl-Anderson Dance Center in Berkeley, died at his home Friday, October 4. He was 87.

Born in New Jersey in December 1931, friends said that Mr. Shawl was a beloved and revered teacher, dancer, and choreographer in the San Francisco Bay Area for more than 55 years. The Shawl-Anderson Dance Company was a renowned dance repertory group in the 1960s and 1970s and spawned many of today's prominent dance artists.

Mr. Shawl was known for his capacity to appreciate life, art, and people in a way that made everyone he encountered feel unique, according to an obituary from the dance center.

Mr. Shawl's family joked that he learned to dance before he learned to walk. By the age of 5, he was enrolled in dance school, and at 17, he landed a job dancing with the Roxyettes at New York's famed Roxy Theater, a job he referred to as "theater boot camp." From there, he found work on Broadway and in television, as a featured dancer on the Perry Como and Red Skelton variety shows, dancing opposite everyone from Betty Grable and Myrna Loy to Ginger Rogers, Debbie Reynolds, and Tallulah Bankhead.

But it was modern dance that fascinated Mr. Shawl most. According to the obituary, he found his lifelong muse, mentor, and friend in May O'Donnell, the Martha Graham soloist who had become a choreographer and director of her own New York City-based company. Mr. Shawl studied at her studio for eight years and joined the May O'Donnell Dance Company in 1954. O'Donnell had a less competitive, more inclusive style of teaching than Graham, based on nurturing and collaboration, and Mr. Shawl, along with his friend and fellow company member, Anderson, who was also gay, knew he wanted to spread that ethos beyond New York.

In 1958, the two men headed west to settle in the Bay Area, where Anderson had grown up. The Shawl-Anderson Dance Center, a school for children and adults, found its first home above a liquor store in Berkeley. Classes cost $2, and Mr. Shawl and Anderson taught them all for several years. The tiny studio had no right angles, and a pillar that jutted up through its center — until Mr. Shawl's father, a building contractor, advised that the pillar could be removed. Without telling the landlord, Mr. Shawl and Anderson took a sledgehammer to the pillar and spirited the rubble away for weeks in their dance bags.

Mr. Shawl appeared in concert with the legendary modern dance pioneer Charles Weidman and returned to New York to assist O'Donnell. In 1962, he and Anderson founded the Shawl-Anderson Dance Company, which would perform to national and international acclaim for the next 14 years.

By 1968, the one-room dance school was at capacity, and the company needed more space to rehearse. Mr. Shawl and Anderson mustered their courage and their life savings and bought a Craftsman house across the street, gutted the interior, and transformed the space into four sunny studios. Today, Shawl-Anderson Dance Center is Berkeley's oldest performing arts institution — a vital hub of dance in the East Bay — that continues to transform lives through movement, reaching more than a thousand dancers, aged 2 to 92, each week. Countless artists have come to the center to study, teach, make and show new work, and celebrate dance.

"Frank Shawl taught me about good dancing, and showed me what good aging looks like," New York City-based choreographer Kate Weare, who had her early training in dance and choreography at Shawl-Anderson Dance Center, said in the obituary. "He never stopped performing brilliantly or taking class. Vibrantly interested in, and ignited by, young artists, he never condescended, he believed in our potential, and he was honest, bracing, loving, and generous of heart."

Added Steve Siegelman, president of the board of the Shawl-Anderson Dance Center, "Dance and love were the compasses of Frank's life. That spirit lives on day after day at Shawl-Anderson and in the hearts and bodies of the thousands of dancers whose lives he gently shaped."

A celebration of Mr. Shawl's life is planned in Berkeley. Information will be available at http://www.shawl-anderson.org. His family asks that donations be made in his memory to the Frank Shawl Legacy Fund at Shawl-Anderson Dance Center.