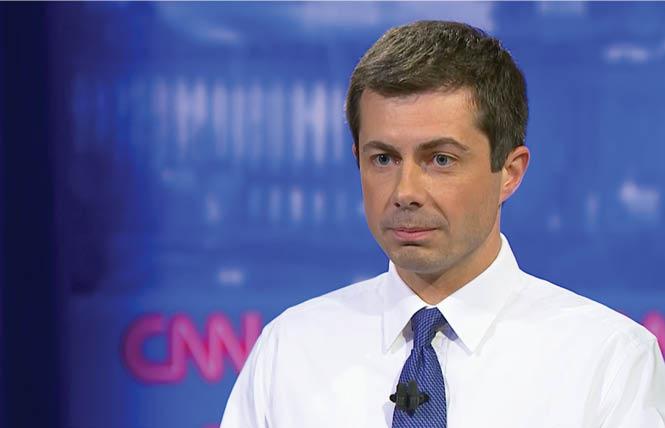 The bar had been set pretty high for CNN's October 10 town hall on LGBTQ issues for Democratic presidential candidates.

It was the first national television broadcast by a major media outlet of an LGBTQ-specific discussion with presidential candidates. It was preceded just one month earlier by a similar event with most of the same candidates answering many of the same questions. And it was scheduled to take place over the course of four-and-a-half hours: nine candidates, 30 minutes each.

While it is sometimes informative to hear a candidate answer the same question in a different forum, the CNN event, co-sponsored with the Human Rights Campaign Foundation, appeared to be structured toward a purpose other than getting the candidates' responses. The real goal of the night seemed to be one of public education. Over the course of the event, more than 50 members of the LGBT community — male, female, gay, lesbian, bisexual, transgender, students, professionals, activists, health care workers, military veterans, and even two elementary school children — told their stories and asked their questions.

There was the husband of the late parachuting instructor whose Title VII case had been argued earlier in the week before the U.S. Supreme Court. Others included the mother of a young man, Matthew Shepard, who had been beaten to death in Wyoming in 1998, a gay man who had survived the gun massacre at Orlando's Pulse nightclub, and gay CNN moderator Anderson Cooper, who acknowledged that he and other LGBT people "just like me" had been "forced to live in silence for decades" for fear of losing jobs or suffering harassment.

There was also Democratic presidential hopeful Mayor Pete Buttigieg, the gay candidate who has been criticized in a few mainstream media outlets of being both "Mary Pete" and too straight-looking. One audience member, Robby Goldman, a doctoral candidate from Illinois, noted that members of the LGBTQ community are not a monolith but that Buttigieg had faced questions about whether he could adequately represent the community.

"I, too, am not always the 'right kind of gay,'" said Goldman, who then asked Buttigieg how he would go about representing the community.

Buttigieg agreed there is "much diversity" within the LGBT community and that he is "very mindful" of the limitations imposed on him by his experience as a "white cisgendered gay man." But, he added, "diversity is what we have to offer" and "there is no right or wrong way to be gay. ..."

Buttigieg, the first gay presidential candidate for a major party nomination to have garnered a significant backing beyond the LGBT community — Fred Karger ran for the Republican nomination in 2012 but never achieved significant support — was greeted at the town hall by a prolonged, enthusiastic, standing ovation. But so was current frontrunner, Massachusetts Senator Elizabeth Warren, who had a touching moment during the event when a 9-year-old transgender boy from her home state asked a question.

Jacob LeMay was one of two young transgender students to pose questions at the town hall. Both were accompanied by their mothers, and Jacob posed the twofer-question himself: "What will you do in your first week as president to make sure kids like me feel safe in schools? And what do you think schools need to do better so I don't need to worry about anything but my homework?"

Warren answered that she wanted to appoint an education secretary who would care about all kids and enforce civil rights laws to protect them. She started to lay out the history of the secretary's position but then seemed to change course.

"And here's my plan, Jacob," she said. "I'm going to find just the right secretary of education, but here's what I plan to do. I want to make sure that the person I think is the best secretary of education meets you and hears your story and then I want you to tell me if you think that's the right person and then we'll make the deal." It was an unabashed one-on-one pander by the former schoolteacher who has clearly not forgotten how to talk, with respect, to children.

It was also a powerful image for the American public to see: that the victims of anti-LGBT discrimination include children.

Shortly after that interaction, CNN moderator Chris Cuomo noted that, in 2012, Warren criticized the idea of prisons providing surgery for transgender-related medical needs. He asked if she regretted taking that position.

"Yes, it was a bad answer," said Warren. "Everyone is entitled to medical care that they need, including transgender people."

The viewing public also got to see the unfiltered anger of black trans women, a demographic that has increasingly become a target for people who harbor anti-LGBT hostility. Trans activists of color interrupted the forum several times to draw attention to the growing number of murders of trans women in the United States. CNN moderators Cooper and Don Lemon both allowed the activists to speak their minds to the studio and television audience before resuming their interviews with the candidates.

Other highlights of the forum included:
- Senator Cory Booker of New Jersey related the struggle of transgender people to use restrooms consistent with their gender identity to segregated facilities, including bathrooms, for people of color. He also said laws "cannot allow people to use religion as a justification for discrimination."

- Former Vice President Joseph R. Biden Jr. shared a laugh with the audience for his choice of words when he started to tell the story of publicly revealing his support for letting same-sex couples marry. "When I came out," he said, then immediately realized his choice of words had a double meaning and tried to change it to "when I publicly stated ..." The audience laughed, and Biden laughed with it. "That would be news," quipped Cooper. Biden, smiling, walked over to him, put his hand on Cooper's shoulder and joked, "I got something to tell ya."

- Asked what he says to people who tell him homosexuality is a sin, Buttigieg said, "I don't believe it is, but I also get that people reach their own understandings of their own faith." He said his goal is not to respond in a way that pushes such people "back into the arms of the religious right" but to encourage them toward "greater acceptance."

- One audience member, noting that teaching about sexual orientation and gender identity in the schools was often controversial, asked Warren for her thoughts. Warren said she supports such curricula because "it's teaching children about our world, about people, about differences." "I strongly support ... doing it in age-appropriate ways when very young."

- Cuomo mocked California Senator Kamala Harris when she stated her preferred pronouns were "she, her, and hers." "Mine too," Cuomo quipped, apparently not understanding that more people — including straight allies — now state their pronoun preferences. The incident led to criticism on Twitter, and Cuomo later apologized, writing in a tweet, "When Sen. Harris said her pronouns were she her and her's, I said mine too. I should not have. I apologize. I am an ally of the LGBTQ community, and I am sorry because I am committed to helping us achieve equality. Thank you for watching our townhall."

Prior to the October 10 forum, several of the Democratic presidential candidates released plans for addressing a wide range of queer issues. Harris, for instance, said she would appoint a "chief advocate for LGBTQ+ affairs" at the White House, fund a "new office" to work with the community in conjunction with various federal agencies, and appoint openly LGBT people to positions throughout her administration, "including her cabinet."

Harris and Buttigieg have been jostling for position in the polling for the Democratic nomination, but campaign news in recent days have suggested there may be some new scrambling underway.

In four of the last six national polls, Warren has led the Democratic field, dropping Biden to second place and Vermont Senator Bernie Sanders to third. Sanders, 78, recently suffered a heart attack and the sudden loss of his daughter-in-law to a fast-moving cancer. He said he would resume campaigning, but his poll numbers had begun to drop even before his medical emergency. Biden, meanwhile, has become a nearly constant target of President Donald Trump in a controversy involving Ukraine and his son, Hunter.

A dozen Democratic candidates will meet in a party-sponsored debate Tuesday, October 15, beginning at 4 p.m. Pacific time from Ohio.