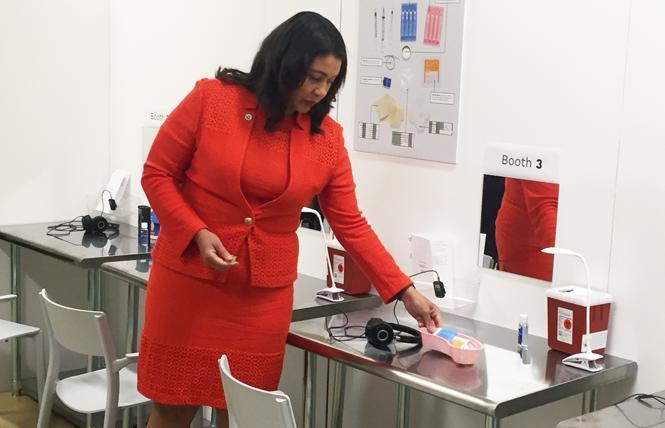 A federal judge on Wednesday struck down the Trump administration's latest attempt to block the opening of a proposed supervised injection facility in Philadelphia.

U.S. District Judge Gerald McHugh ruled October 2 that the nonprofit Safehouse facility does not violate the "crack house" provision of the federal Controlled Substances Act, which makes it a crime to operate a site where illegal drugs are produced, distributed, or consumed.

Philadelphia and San Francisco are among several cities vying to open the first supervised consumption site in the United States, along with Boston, Denver, New York, and Seattle. There are currently around 120 such sites in at least 10 other countries.

The court decision prompted District 6 Supervisor Matt Haney to announce Wednesday afternoon that he plans to introduce legislation to create the city's first such facility in San Francisco.

"This ruling removes one more roadblock toward opening these needed programs here in San Francisco," said Laura Thomas, director of harm reduction policy at the San Francisco AIDS Foundation. The organization is part of a coalition working to open safe consumption sites in the city, with the support of Mayor London Breed and the Department of Public Health.

"The urgency is growing — the recent increase in fentanyl overdoses, HIV incidence among people who inject drugs, the numbers of people using drugs on the sidewalks — and it's time for San Francisco to take action," Thomas told the Bay Area Reporter.

Safe injection facilities, also known as overdose prevention sites, allow people to bring drugs obtained elsewhere to use under the watch of trained staff, reducing the risk of overdose death. They provide sterile needles, which prevents transmission of HIV and hepatitis B and C. Indoor sites also reduce street-based drug use and improper syringe disposal. Finally, they offer an entry point for medical care, addiction treatment, and an array of other services for people who use drugs.

DOJ vows to appeal
In February, the U.S. Department of Justice filed a lawsuit to block the opening of Safehouse, claiming it would violate federal drug laws.

"For purposes of this action, it does not matter that Safehouse claims good intentions in fighting the opioid epidemic," the DOJ complaint read in part. "What matters is that Congress has already determined that Safehouse's conduct is prohibited by federal law, without any relevant exception."

But McHugh disagreed. There is no credible argument that Congress was considering safe injection sites when it adopted the crack house rule in 1986, he concluded in his ruling, as "their use as a possible harm reduction strategy among opioid users had not yet entered public discourse."

The Justice Department indicated that it would appeal the decision.

"The department is disappointed in the court's ruling and will take all available steps to pursue further judicial review," Deputy Attorney General Jeffrey Rosen said in a statement. "Any attempt to open illicit drug injection sites in other jurisdictions while this case is pending will continue to be met with immediate action by the department."

State effort continues
Although the legal fight in Philadelphia is far from over, harm reduction advocates lauded Wednesday's decision and said it sets an important precedent.

"As we are in the midst of one of the nation's worst public health crises, today's ruling is a significant victory in the fight to save lives," said Lindsay LaSalle of the Drug Policy Alliance. "We hope this decision sends a signal to the Trump administration that criminalization is not the right response to overdose deaths and that the administration will rethink efforts to interfere with state-level drug policy that prioritizes individual and community health."

The legal battle for supervised consumption sites in California is also continuing.

Eggman and Wiener reintroduced the legislation this session and current Governor Gavin Newsom has indicated that he is open to signing it. But in June, the lawmakers decided to pull AB 362 for this year. Instead, they plan to modify and advance the bill next year, in part to add other cities, including Oakland.

"Today's ruling in federal court affirms all of what we've been arguing about overdose prevention programs for the last several years: they aim to reduce death and disease, get people into treatment, and would not violate the 'crackhouse statute,'" Eggman said in a statement. "While the federal government may keep trying to prevent states and local governments from these research-driven interventions, we'll keep pushing to move AB 362 to the governor's desk next year."

Added Wiener, "Despite the Trump administration's aggressive opposition, Philadelphia is opening a safe injection site to combat the addiction epidemic gripping our nation. We need to do the same in San Francisco and we need state legislation to authorize it. Safe injection sites have a strong track record reducing addiction, overdoses, crime, and syringe litter. We will continue to work to get this done for our city."

In the meantime, Haney plans to move forward with his legislation for an overdose prevention site. Last week, he introduced a resolution declaring a public health crisis due to the drug use on city streets.

"As we speak people are shooting up on the streets of my district and overdoses are happening everyday — we need to get these people off the streets. I am introducing legislation to require that the city treat this like the crisis it is and do everything possible to have a site open immediately," he said in a news release.

For her part, Breed characterized the Philadelphia decision as a "big deal."

"This ruling is a big deal for public health and addressing the drug crisis that we see every day on our streets," she said in a statement. "Safe injection sites save lives."