2 activists elected to SF Pride board 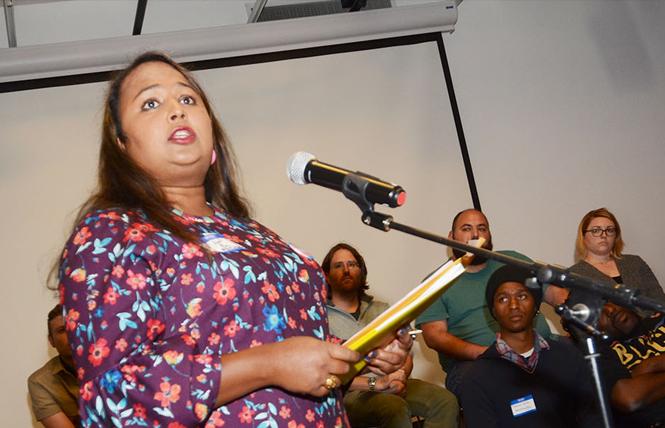 Anjali Rimi, who won a seat on the SF Pride board, spoke at the annual meeting last Saturday. Photo: Rick Gerharter

Anjali Rimi, a transgender activist who co-founded Parivar, a collective for South Asian transgender and gender-nonconforming people, was the top vote-getter at the September 21 SF Pride annual general membership meeting. She received 95 votes.

Longtime activist Alex U. Inn came in second with 65 votes.

None of the other candidates received the 61-vote minimum. A total of 119 ballots were cast.

Rimi and Inn will be seated at the next Pride board meeting and serve for three-year terms.

"I feel excited and energized to continue the work that's very much needed to bring us together as one community," Rimi told the Bay Area Reporter after the vote. "A community that is trans, people of color, immigrant, differently abled ... building accountability for SF Pride as the social institution for underrepresented queer and trans voices here and everywhere else."

According to Fred Lopez, interim executive director of SF Pride, the board has the discretion to appoint a third board member.

Current SF Pride board President Jacquelene Bishop, along with incumbents DJ Gray and William Walker, did not win re-election.

Two of the candidates were not present for the meeting. The other 11 candidates were given four minutes each to speak. Lopez, Marsha Levine, and Alvaro Gonzalez served as election inspectors, while former SF Pride executive director George F. Ridgely Jr., Jokie X. Wilson, and former school board member Kim-Shree Maufas were the election observers. Carolyn Wysinger was the time-keeper, and Suzanne Ford was the vibe watcher, who had the authority to pause the meeting if standards of behavior were not being met. 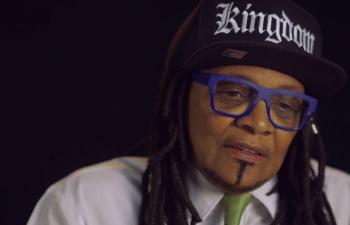 Alex U. Inn was elected to the SF Pride board. Photo: Courtesy SF Pride

During her remarks, Rimi called for the accountability of police actions to be addressed.

"I will deploy inclusion and diversity checks for any [for-]profit corporation participating at SF Pride, along with a revamp of the revenue model that relies heavily on corporations," she said. "SF Pride has a responsibility to evolve beyond cisness, beyond whiteness, and deter any anti-blackness that still exists in our community at large. The Latino gay man fighting racism, that Muslim lesbian fighting Islamophobia, and black trans woman fighting transphobia, these voices need to be uplifted."

Inn, founder of Momma's Boyz, a local drag king troupe, was met with wild applause when they spoke.

"My statement is simple," Inn said. "We must bring Pride back to its roots. We owe it to our queer-cestors before us to recognize that Pride started as a riot, fighting for our rights and our lives. Pride should be looked at through a protest lens.

"With this current administration trying to eliminate any gains we have made, we can't stand back as the platform we have as the most-watched Pride organization in the world," Inn said, referring to the Trump administration. "We owe it to those who don't have a voice. Our 50th anniversary should say it all: we are proud and not intimidated. Pride is a riot, a protest, a march."

Next year marks the 50th of the San Francisco Pride celebration. This year was the 50th anniversary of the Stonewall riots in New York City, largely viewed as the birth of the modern gay rights movement.

Attendees at the meeting were pleased with the results.

"I'm so thrilled to have a trans woman of color on the board," said Dana Hopkins, a 68-year-old queer woman. "I know Anjali and how experienced and competent she is."

Others were first-time participants.

"I am encouraged by all of the exuberance and passion that all the candidates have displayed," said Simone Campbell, a 53-year-old lesbian. "Clearly everyone is really interested in affecting real and meaningful change and while that's great, like any other team it's about putting the best people in the right position."

SF Pride board member Bruce Beaudette, a 60-year-old gay and queer man, said that he thought that the candidates were very passionate and interested in seeing change happen.

"The winners will learn about the process of bringing about change," he said. "It's harder than simply talking about it."