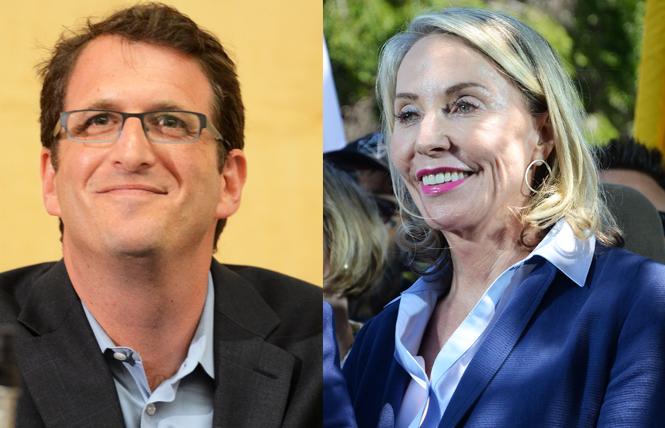 The two leading candidates in San Francisco's heated contest for the District 5 supervisor seat both are vocal critics of the city's mass transit system and its less-than-stellar service in the Haight, Cole Valley, and Fillmore neighborhoods.

In separate editorial board meetings with the Bay Area Reporter this month, both Supervisor Vallie Brown and tenants rights activist Dean Preston told of waiting at Muni stops and being unable to board either a cramped bus or packed N-Judah subway car headed toward downtown. They both related how their fellow stranded passengers resorted to taking private transit options instead.

"They were going to ride Muni, and then they just peel off one, two, right, and start getting into cars, because they have to get to work on time or their kids to school on time, you know, or a doctor's appointment, whatever it is. And right there, we're just shooting ourselves in the foot," said Brown, who was appointed to the seat last year after her predecessor and former boss, London Breed, became mayor.

It is why Brown said one of her first actions as supervisor was to call for a hearing "about pretty much why Muni sucks, right?"

A key finding that came out of the hearing, recalled Brown, was that the starting salary for Muni drivers was below the $46,500 threshold needed to qualify for below-market-rate housing in the city. The San Francisco Municipal Transportation Agency would train people to be public transit drivers and those new recruits would then be hired by other area transit systems that pay more, noted Brown, contributing to Muni's shortfall in having enough bus drivers and train operators each day.

It led to a new contract for Muni operators approved in May that boosted their pay rates and significantly shortened the time it takes for new drivers to receive raises. The aim is to fill the 400 open operator positions Muni had last year.

"There's not enough drivers to drive the trains and buses. They're sitting in the yards," Brown said.

When asked about his ideas for fixing Muni, Preston replied, "I'm laughing because I've been riding Muni every day for 26 years, and I haven't seen it worse."

He argued the agency's reported on-time performance for routes is misleading because it doesn't factor in those times when buses or trains are unable to stop and take on more passengers. It is an issue he has witnessed firsthand all year as he has campaigned for the supervisor seat, which he came close to winning when he ran against Breed in 2016.

"So many of these on-time buses, you just can't get on, and that's not factored in," said Preston. "Muni does not even look at the overcrowding issue. It's like, it's like, probably the biggest thing that impacts riders, that's not even factored in, in anything I've ever seen."

The two electoral opponents differ, though, on several solutions that have been floated to address improving SFMTA. One would see appointments to the SFMTA's oversight body be split between the mayor and the Board of Supervisors.

Currently, the mayor appoints all seven members of the SFMTA board, which is searching to hire a permanent director of the agency. Voters in 2016 rejected a ballot measure that would have given the supervisors a minority number of seats to fill on the SFMTA board.

The idea continues to be talked about, especially with frustration about Muni's problems at a boil among both elected leaders and riders. Preston told the B.A.R. that he believes the SFMTA board appointments should not be entirely in the domain of the mayor.

"Yes, I think at minimum split appointments. What I'm undecided on is whether there's a role for having elected positions as well or not," said Preston, though he noted he isn't aware of an effort to return to the ballot to require that. "But definitely just having mayoral appointees has not been a successful formula."

But Brown cautioned against ignoring the will of the voters from three years ago, even though as a supervisor she would like to have more say over the city agency.

"I just don't, you know, like with any commission or any department, I don't want to have us, you know, kind of tear them apart where they can't really do their job," she said. "They need to do their job and not have the politicians go, you know, slugging it out with them. But as a supervisor, yeah, I'd like to have a say in that. Sure."

Preston is working with local leaders who are eying next November's ballot to bring a measure before voters that would likely tax large corporations with annual revenues of at least $50 million in order to raise an estimated $300 million a year for Muni. Half of the funds could be for infrastructure needs and salaries, with $100 million used to reduce fares and the remaining $50 million for bicycle and pedestrian improvements.

"When you make public transit cheaper, or even eventually free, as some European cities have done, you're going to have way more people on it so you've got to be really ready with the infrastructure improvements to get there," said Preston, who pledged if elected he would work with backers of the measure to come up with a final proposal for the ballot.

Brown was noncommittal when asked about the Muni tax proposal, saying she needs to look at the final measure first.

She suggested a better approach could be having a wealth tax, where the city would tax people on what they are worth, including their stock holdings and other income, instead of a tax based on people's paychecks, since she pointed out many wealthy people pay themselves fairly little. More immediately, Brown would like to see more police ride Muni instead of their squad cars.

And while Preston is calling on the city to move to a completely free Muni system for all riders, Brown cautioned against doing so other than the current free rides offered to students, seniors, and people with disabilities.

"I just don't see how it's going to be free and be reliable," she said of Muni. "I don't want to, like, have free Muni and then have it go down and then it's not reliable because, guess what, people won't take it even if it's free."

One transit issue Preston and Brown do agree on is with the city's prohibition against Uber and Lyft drivers using the red-only transit lanes set aside for Muni vehicles and licensed taxis. Brown told the B.A.R. that the point of the red zones is "to make Muni faster" and allowing the 30,000-plus car-share vehicles on the roads to use them would "be a mess."

Preston agreed and said city leaders should be doing more to reign in the ride-share companies, from pressing state lawmakers to pass legislation giving cities the authority to cap the number of such vehicles on the roads to taking other actions they currently do have the power to pursue now, such as suing the companies for violating local traffic laws.

SF bans Iowa travel, contracts
As expected, San Francisco is adding Iowa to the city's travel and contracting ban due to adopting anti-LGBT legislation. According to the city's Office of Transgender Initiatives, the ban will be effective as of October 4.

It follows the decision by California to no longer allow taxpayer funds to be used for state employees to travel to Iowa due to the state's implementation of a discriminatory transgender law. As the B.A.R. reported online Friday, September 13, California Attorney General Xavier Becerra is making the Hawkeye State the 11th state on the banned travel list. The state's prohibition on Iowa travel will also take effect October 4.

It is due to the enactment by Iowa lawmakers of House File Bill No. 766 (HF 766) on May 3. The bill repealed existing protections under the Iowa Civil Rights Act that previously ensured Medicaid coverage for gender-affirming care. The new law makes it clear that coverage for this care is no longer required in Iowa, according to Becerra's office.

San Francisco maintains its own banned list of states that have adopted anti-LGBT laws since 2015 that mirrors the state's "no-fly" list. The local ban however not only prohibits taxpayer-funded travel but also restricts city agencies from contracting with businesses based in those states.

Web Extra: For more queer political news, be sure to check http://www.ebar.com Monday mornings for Political Notes, the notebook's online companion. This week's column reported on the decision to delay state legislation aimed at protecting transgender inmates to the 2020 legislative session.

UPDATED 9/19/2019 to clarify Dean Preston has been riding Muni everyday, not the N-Judah subway line.