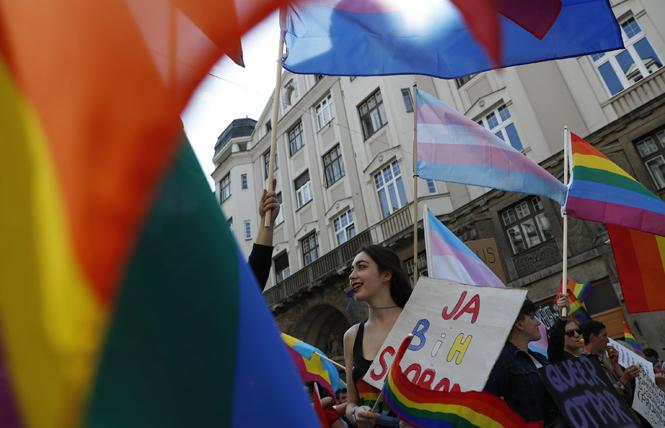 Thousands of pride marchers flowed through the streets of Sarajevo in the country's first successful Bosnia and Herzegovina Pride march and festival last Sunday.

Flanked by an estimated 1,000 police officers who surrounded the parade route, the Pride marchers celebrated carrying banners with the slogan, "I Want Out."

Marchers waived rainbow flags and sang anti-fascist songs while carrying signs that read, "Love is not a privilege" and "Queer Resistance," as they passed through Sarajevo, Bosnia's capital city.

There were no reports of violent attacks as in years past.

Bosnia is the last of the Balkan states that formerly made up Yugoslavia to never have completed hosting a successful Pride event. Previous attempts to produce Sarajevo Pride in 2008 and 2014 were shut down due to outbreaks of violence by anti-gay protesters clashing with police, who provided protection to marchers.

The day before the parade about 100 anti-gay demonstrators held their own march.

Homosexuality has been legal in Bosnia since 1998. The country has some legal protections such as anti-discrimination laws, the ability to serve in the military, and a ban on conversion therapy, but it doesn't have same-sex marriage and family protection laws. Stigma against LGBT people still remains strong in the mostly Muslim and Orthodox country.

The country also continues to face challenges due to its ethnic diversity.

"If there was no violence I wouldn't be here today," Lejla Huremagic, one of the Pride organizers, told the crowd on Sunday, reported the Associated Press. "This gives us strength and faith that prejudice against us will start to wane and that it will become better for all of us."

The United States and European Union ambassadors supported the Pride parade and celebration.

Bosnia is currently in the process to join the E.U.

Bosnian music star Bozo Vreco called the mostly peaceful parade a "big step forward for Bosnia and Sarajevo, opening the doors to Europe and the world."

"I think that love has won today," Vreco, who wears dresses during performances to express both male and female sides of his personality, told Reuters.

The penal code outlawing sexual behavior "against the order of nature" imposed by the British for nearly 160 years was originally struck down by the Delhi High Court in 2009.

India's Supreme Court reinstated the law in 2013 before it was struck down again last year.

Despite the protections granted, India still has a long way to go to gain full equity and equality, LGBT Indian activists said. Decriminalization was a major step, but many say the fight is just beginning to gain anti-discrimination laws in housing, health care, education, and employment; to serve openly in the military; marriage equality; and family rights.

India doesn't maintain a census on its LGBT community, but the government estimates there are 2.5 million LGBT people in the country. Devdiscourse reported that LGBT Indian activists believe the number is higher and want educational programs to spread awareness of the community.

For all of the talk in recent years of India chasing the pink rupee, societal and government policies that are unfriendly to LGBT people have cost the country an estimated $30 billion, according to a 2014 report by the World Bank, "The Economic Cost of Homophobia and the Exclusion of LGBT People: A Case Study of India."

"We have to remove this stigma," Simran, a trans woman uses one name and heads Impulse New Delhi, an LGBT rights group, told Devdiscourse.

This year, the transgender community has been fighting India's parliament against a transgender rights bill. They want a bill that accurately protects the gender-nonconforming community by addressing the nuances of the community. The problematic bill was passed by the lower house at the beginning of August. It's still waiting for ascent to the upper house of parliament and Prime Minister Narendra Modi's signature.

Despite the stigma, the court's striking down 377 last year inspired more Indians to come out, such as Pavi Julka. Devdiscourse reported that the 20-year-old student attended the celebratory rally in Delhi.

"In the future, I wish that no person feels guilty for who they are," she said. "They should be able to "live the life they want, no questions asked."

"Change is slow, but it will happen if we keep pushing for it," she said. "It has taken a long time for the law to be struck down. We have to dig our heels in deeper and never give up hope."

Mugabe grew up poor and was raised by a single mother but excelled in Catholic schools. He was considered an educated revolutionary, but his reign was defined by his tyrannical rallying against the West, LGBT people, and whites. He was forced to resign by his political party, ZANU-PF, following a military coup that made Mnangagwa Zimbabwe's third president.

For 37 years, Mugabe was one of Africa's notorious anti-gay leaders. He called LGBT people "worse than pigs and dogs" and threatened to behead them in 1995, reiterating his position in 2014.

It was one of his key battle cries as he rallied against his pro-gay rival, the late Nelson Mandela of South Africa, whom he saw as subservient to the Western world. He launched his campaign against gays in 1995, and it shaped international perception of his leadership.

In 2014, more than 30 people were injured when an LGBT rights organization's end-of-the-year party was attacked by a group of men, reported the Washington Blade.

However, Mugabe reserved his massive human rights violations against the Ndebeles, in the southern Matabeleland provinces, where his army killed up to an estimated 10,000 in what became known as the Matabeleland Massacres in the 1980s. He tortured anyone who opposed him through his nearly four decades of rule. Human rights organizations estimate his militia killed up to 300 leaders of the opposition party and tortured many more.

According to Pink News, Zimbabwe has one of Africa's worst LGBT rights records. Under Mugabe's administration, diplomats weren't allowed to discuss LGBT rights. The country suffers from one of the highest HIV rates in the world and LGBT Zimbabweans face 14-year jail sentences if convicted. Blackmail, arrests, and physical torture continue to happen.

Last year, Mnangagwa, leader of the Zimbabwe African National Union, began to show a change of heart, backing away from the party's long-standing anti-gay stance by offering an olive branch and meeting with leaders of Gays and Lesbians of Zimbabwe.

Chester Samba, director of GALZ called the meeting positive and an "important shift."

"This marked a departure from the previous leadership which did not engage with us," he told Pink News.