Guest Opinion: Harris is the best choice for president 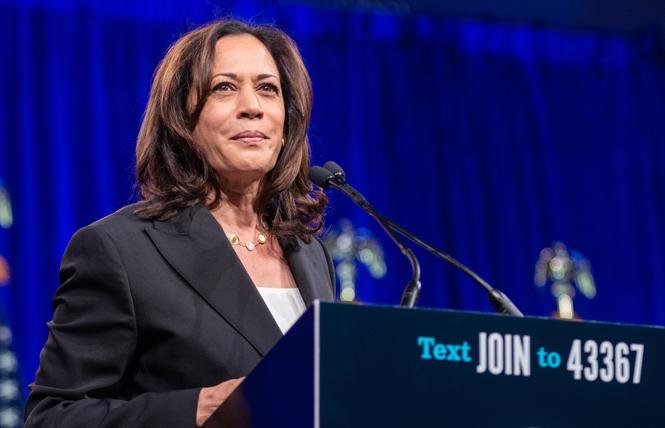 Donald Trump poses an existential threat to our country and the world. We cannot afford four more years of this disaster of a human being, one who viciously attacks LGBT people, aggressively promotes climate change, packs our courts with right-wing ideologues, and threatens world stability. We must get rid of Trump.

We must also elect a strong, principled, progressive, and highly competent individual as our next President. That individual is Kamala Harris.

I've known Harris for almost 20 years, back to when I was a junior trial lawyer in the San Francisco City Attorney's office and she was my highly experienced colleague. I still remember the day, during the first jury trial I handled on my own, when a judge was hazing me. During the lunch hour I went to Harris' office, closed the door, and asked her what I should do. She methodically walked me through the things I needed to do. She ended our conversation by looking me in the eye and saying, "Don't let her bully you. Stand your ground, and do what you think is right."

Harris is a staunch ally of the LGBT community. As district attorney, she established the LGBTQ Victim Advocacy Unit, which offers support to LGBTQ crime victims. She took national leadership among prosecutors to fight the "gay panic" defense. People who commit heinous crimes against LGBTQ people sometimes use this defense to blame the victim's sexual orientation or gender identity to excuse their violence. Kamala successfully pushed for a state law in California banning this heinous courtroom strategy.

As attorney general, Harris refused to defend Proposition 8 in court, helping put the nail in the coffin of this clearly unconstitutional measure. As our senator, she has led the charge against Trump's anti-LGBTQ judicial nominees and sponsored legislation to ensure LGBTQ Americans are properly counted in the census and legislation to prevent the use of religious beliefs as a justification to discriminate against LGBTQ people. Harris is a co-sponsor of the Equality Act — to ban anti-LGBTQ discrimination under federal law — and recently announced her groundbreaking bill to ensure that the HIV prevention drug PrEP is covered by all health insurance plans.

Harris' leadership goes beyond LGBTQ-specific work. She was ahead of her time in understanding the need for significant criminal justice reform. As district attorney, she created a first-of-its-kind program to direct young people arrested for drug crimes into job training and counseling programs instead of jail. This program, Back-on-Track, became a national model for how prosecutors could bring reforms to county jails. As attorney general, she started a statewide Back-on-Track program to provide counties with a model of how they could provide better re-entry services. In the Senate, she has championed sentencing reform and introduced bipartisan legislation to end our country's money bail system. She recently released a bold and comprehensive plan to fundamentally reform this broken system.

And, Harris is a tenacious fighter to meaningfully and aggressively tackle climate change. As attorney general, she aggressively defended California's implementation of its landmark cap-and-trade legislation and our low-carbon fuel standard. She partnered with the Santa Barbara district attorney to prosecute the company responsible for the devastating May 2015 oil spill off the Santa Barbara Coast.

I am confident that Harris, as president, will take these fights to the next level and make us proud. She will lead in getting the Equality Act passed in order to end the continuing discrimination our community faces in so many parts of this country. She will take immediate action to roll back the Trump administration's anti-LGBTQ policies, including disgusting rules to allow discrimination cloaked in religion and banning transgender service members. She will appoint a fair-minded attorney general and fair-minded judges to ensure that our community and all communities receive the justice and equity we deserve.

Harris will take whatever action is necessary to end mass incarceration, place a moratorium on the death penalty, and prioritize treatment and rehabilitation for low-level drug offenses. She will restore our country's leadership on climate and put an end to Trump's despicable war on immigrants, including creating a pathway to citizenship for Dreamers. She will fight to pass her Medicare-for-All plan to provide comprehensive health care for every American, including mental health services, substance use disorder treatment, and comprehensive reproductive health care services.

On so many critical issues, Harris has been there when it matters, and she will be there for us as president. She has my full support.