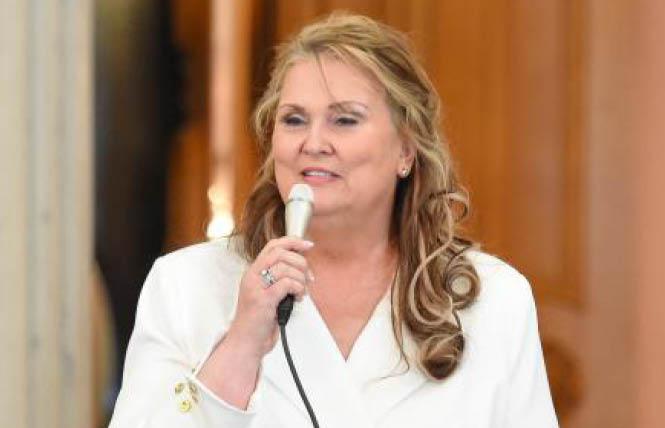 Ignoring calls she resign after blaming the LGBT community for the recent mass shooting in her state, an Ohio politician has made it impossible for the public to now read her social media post that drew nationwide condemnation.

The August 4 mass shooting in Dayton, Ohio left nine dead and 27 more wounded. In a Facebook post that day, state Representative Candice Keller (R-Middletown) blamed the incident, which occurred 30 miles from her district, on "transgender, homosexual marriage, and drag queen advocates," as well as a host of other problems, indicating that "the fury will continue" unless these things are somehow checked.

In her social media post Keller also brought in other people and concepts to "place the blame where it belongs," including fatherlessness, violent video games, former President Barack Obama, recreational marijuana, and current Democratic members of Congress whom she did not name but did call anti-Semitic.

The statement has since been made private or removed.

Calls for Keller's resignation began at once on the local level, and became more vociferous as the news of her statement spread. Keller's office did not respond to a request for comment.

The Dayton shooter, Connor Betts, was a 24-year-old man who kept a "rape list" and a "hit list," as a high school student, according to local reporting. He was killed by police officers after firing 41 shots. Betts' first victim in his shooting spree was his 22-year-old sibling. It's been reported in several outlets that this sibling was a transgender man who went by the name Jordan Cofer in online spaces.

In a statement emailed to the Advocate, Gillian Branstetter, media relations manager for the National Center for Transgender Equality, emphasized importance of journalists, police, and other people with power over the lasting record to correctly identify the deceased, taking care not to misgender or deadname those who cannot speak for themselves.

Representatives from NCTE did not immediately respond to a request to verify or elaborate on this statement.

"We are deeply saddened to hear of the loss of Jordan as well as eight others in this tragic and violent act," Branstetter wrote, according to the Advocate. "Mass gun violence is an epidemic in this country and deserving of swift and immediate action by lawmakers at all levels of government. We join the nation in mourning for every community impacted by gun violence."

Anonymous sources have spoken with media outlets on this person's identity.

Randy Phillips, board president of the Greater Dayton LGBT Center, said it's been nearly impossible to parse out accurate information.

"We've got a mixed issue," Phillips told the Bay Area Reporter by phone last week. "Social media is picking up that one of the victims was a transgender individual. We reached out to their school, and the person had never been to our center, that we're aware of. We reached out to two close family members, and they're refuting that information as well," he said.

Phillips went on to explain that several local groups are planning to issue a joint statement but that they have not found any verifiable information.

"It's all coming from this unidentified friend, and we're trying to find out who that person is. We keep going back to Jordan's Instagram page, but the photo there doesn't resemble the victim in any way," Phillips said.

"When we reached out to people close to the family, they abjured that information. They said that Megan [Betts] was indeed someone who was tomboyish, who was never one to wear makeup. They recently started wearing shorter haircuts, but that doesn't necessarily put them in our transgender community. I've spent the last two days trying to verify this, to see if there's anything to it. I've got nobody saying yes, but I've got two people saying it isn't," Phillips, a gay man, carefully explained.

Reached Monday, Phillips said he had no new information.

Speaking on the surreal attention this tragedy has brought to the town, Phillips was protective of the Betts family and the other victims.

"We hope that everyone respects the families involved. Even the Betts family. While the shooter is a part of that family, the family itself lost two children that night. We don't want to diminish that loss for them in any way," Phillips said.

"In Dayton, we are a very supportive community all the way around," Phillips added, ending his conversation with the B.A.R. on a hopeful note. "One thing I love about Dayton, if anything happens to our town, even the tornados that came through, Dayton rises together to meet it."

While the avatar photo for the reportedly-connected Instagram account does not seem to depict the same person, a photo dated July 25 depicts the deceased sibling of the shooter. Captioned "In the process of getting blue in my hair," the account owner is identified as Jordan Cofer, using the handle jordanseansmith107. Cofer's final post is populated with comments from friends mourning and promising to "tell the truth" about who he was.

Cofer's Twitter account is sparse, with only 109 tweets since its creation in 2016. The avatar for Jordan Cofer compares very closely with Betts, appearing to be the same person. Cofer's account interacted with the now-suspended Dayton shooter's account on August 2, two days before the deadly event, saying somewhat ominously, "good for you for not causing a panic."

Cofer's account has been inactive since that day and is not revealing on the subject of the owner's identity. There are no pronouns in the bio, and Cofer never tweeted or retweeted any statements or memes on trans issues. The owner of the account was a big fan of voice actor and singer Zach Callison, best known for his work on the LGBTQ-friendly animated television series "Steven Universe," and tweeted several pictures of him.

In 2017, Cofer reached out to the independent singer and actor Mandopony, saying that the lyrics of his song "The Real Me" had "hit home" for them. In part, the song's lyrics read: "And I'm still patiently waiting/For the day I'll quit masquerading/But I'm not quite ready for you to see/The real me."