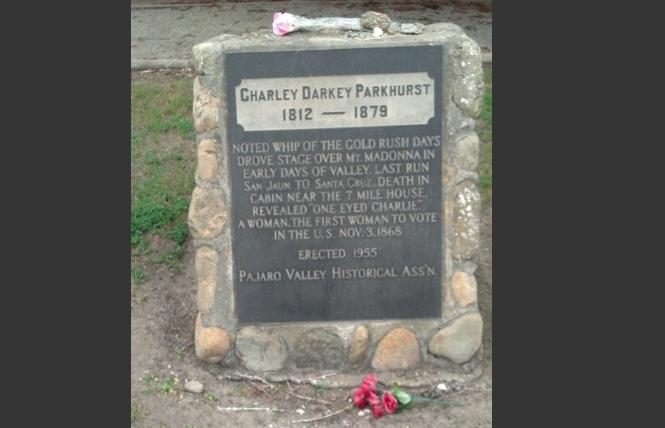 The California Gold Rush attracted many unique and memorable characters to the West Coast. From farmhands who wanted to make it rich to crooks who were looking for their next prey, they all came to the Golden State to secure their slice of the pie. One of the most infamous names of that era was six-horse stagecoach driver Charley Parkhurst — who is more commonly remembered by the moniker "One-Eyed Charley."

Parkhurst — who became blind in one eye after being kicked in the face by a horse — was also a revered shooter. In fact, a popular anecdote is that criminals would avoid stealing from any stagecoach driven by the stocky, tobacco-chewing driver. For decades, Parkhurst safely moved people and precious cargo between cities in California, like San Francisco and Sacramento, on dangerous dirt roads that hugged deep chasms. Records also show one of the eyepatch-wearing driver's clients was Wells Fargo Bank.

The legend of One-Eyed Charley only grew when, after dying of cancer of the tongue in 1879, at the age of 67, a doctor discovered the famous driver and shooter was a biological woman. A later investigation revealed Parkhurst's birth name was Charlotte — who grew up as an orphan in New Hampshire.

Historian and educational publisher Mark Jarrett, Ph.D., 66, recently published the textbook "E Pluribus Unum." The title, which is Latin for "out of many, one," complies with California's new standards under the FAIR Education Act — also known as Senate Bill 48 — a law that added disability and LGBTQ content requirements to the K-12 curriculum in the state. Moreover, one of the historic figures discussed in the book is Parkhurst.

"I wrote 'E Pluribus Unum' myself, from scratch" said Jarrett, "using both the content standards and the 2016 [History-Social Science] Framework as my guide. It was a challenging task, reconciling both documents, but I thought my book would therefore make the job that much easier for teachers in the classroom."

Little is known about One-Eyed Charley's personal life, and Jarrett noted that this very fact pushes people to reflect on many issues. He questioned, "Why did Parkhurst choose to live as a man; how did Parkhurst succeed in concealing gender identity for so many decades; did any others know of Parkhurst's true biological identity; what was Parkhurst's sexuality, and did Parkhurst have partners?"

While Jarrett admitted he had not heard of Parkhurst prior to reading the new California History-Social Science Framework, released in 2016 — which specifically names Parkhurst in chapter 12, in the eighth grade content, under Women of the West and states "who was born as a female but who lived as a male" — he noted that the famous stagecoach driver has recently gained a lot of popularity through books and movies. Additionally, he also pointed out choosing a pronoun for Parkhurst has proven a difficult task for historians and journalists alike.

"Do we refer to the adult Parkhurst as 'he' or 'she'"? asked Jarrett. "In other words, with Parkhurst, we immediately face the issue of whether gender is a social or biological construction."

Jarrett, who is an LGBTQ ally and attorney, believes the stories of the LGBTQ community are important. He said, "I see the experiences and struggles of LGBTQ Americans as an important part of this larger story."

"Middle school students should learn about Parkhurst," he continued, "because Charley was part of the Old West. Students should realize that the West, like American society today, was not a monotone society, but one that was exceedingly diverse. Students should also realize that some women struggled to have greater choices in the work that they undertook, and in their struggles to be treated with greater respect, and to enjoy greater independence. Finally, middle schoolers are reaching puberty and should appreciate and respect the different feelings that develop. This is what empathy and understanding are all about."

You can learn more about Jarrett at https://californiasocialstudies.com/about-the-author/ and read more on the FAIR Education Act at https://www.cde.ca.gov/ci/cr/cf/senatebill48faq.asp .

Belo Miguel Cipriani is an award-winning author and prize-winning journalist. He will be reading from his new book, "Firsts: Coming of Age Stories by People with Disabilities," at the Booksmith, in the Haight-Ashbury, September 30. Learn more at www.belocipriani.com.