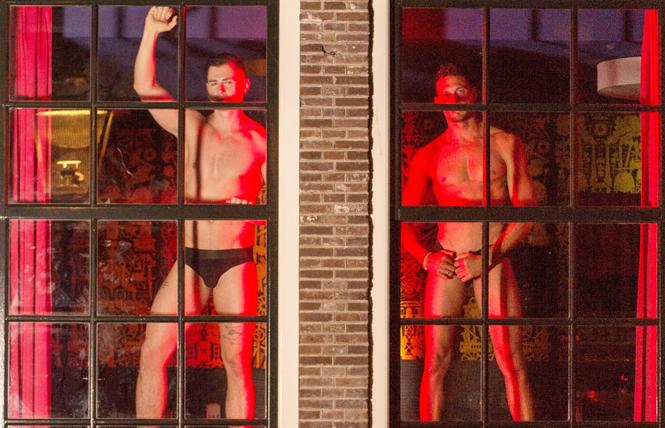 Hunky male sex workers took to the windows of the My Red Light organization in Amsterdam last weekend during Pride.

It was a rare opportunity for Amsterdam Pridegoers to take pictures of the male escort models, as photos aren't allowed in the red-light district without sex workers' permission.

Aligning with Amsterdam Pride's theme, "Remember the Past, Create the Future," the goal of the August 3 event was to bring awareness to male sex workers and sex workers' rights.

Usually, the peepshow-like windows that line the red-light district, known as De Wallen, are filled with scantily-clad female sex workers advertising the brothels. My Red Light, a sex worker rights organization, also has windows in the district.

Jens Schmidt, a gay man who founded HUNQZ (http://www.hunqz.com/escorts), which partnered with My Red Light (https://myredlight.nl/) to organize the project, said he walks through the red-light district regularly on his way home.

HUNQZ is the largest escorting network for gay, bisexual, and transgender companionship service with more than 38,000 registered users worldwide. Clients and escorts can discreetly chat and book dates through the network.

"How different it would be if there were men in the windows too?" Schmidt said in an August 2 news release.

"We wanted to partner with My Red Light to raise awareness that every sex worker deserves the same respect and rights as anyone else for the work they do," said Schmidt.

"I think we made a bit of a splash," Lukas Daken, one of the models in the window, wrote in an email interview with the Bay Area Reporter.

The 30-year-old queer male escort appreciated the "opportunity to create solidarity among gay and straight sex workers and getting equality for gay people," he wrote.

"The red-light district is very straight-dominated, so it's good to get a bit of gayness in there," he continued, explaining that there is one street for transgender sex workers and another for women, but none for gay men.

"The best thing to come out of it was raising visibility around male sex workers — they do exist — and also helping to promote greater gender equality during Pride in Amsterdam," he wrote, adding that the project received a lot of positive feedback.

Red zone
The Netherlands, once upheld for its progressive stance on prostitution when it legalized the practice in 2000, is experiencing a backlash with growing opposition to regulated sex work. To target sex trafficking, the Dutch Senate is considering legislation that will punish sex workers' customers if they pay for sex with someone who has been trafficked, pimped, or otherwise coerced, reported the Independent.

According to opponents, brothels are already shutting down and sex workers are being pushed out throughout the country.

Prostitution supporters and opponents continue to debate the issue, especially in the country's capital city, Amsterdam, which has benefited from its famed district.

Conflicting government reports show a decrease, but assume the number is greater due to the hidden nature of sex trafficking.

Sex work is "constantly conflated with human trafficking" or the dichotomy of the "happy hooker" and the "poor victim," Velvet December, advocacy coordinator for Proud, a sex worker-led group, and who works at the Netherland's only lesbian-owned escort agency, De Stoute Vrouw (The Naughty Woman), told Foreign Policy.

This perception of sex workers "leaves no room for the realities we face and to address the problems we see," she said.

In the face of these challenges, Amsterdam's sex workers are pushing for equal employment rights.

Sex workers are required by law to register as independent workers, pay taxes, and pay for health insurance, but they aren't afforded many rights that other independent workers receive, such as opening a business bank account or unemployment, pensions, and other benefits, reported Foreign Policy.

These challenges are causing many sex workers to simply opt out of registering and to work illegally or relocate to Brussels, Belgium. Belgium legally allows private prostitution, but not brothels, according to Brussels.info/red-light-district.

Amsterdam's government is working to fix the issue by expanding permits beyond the historic red-light district in order to provide sex workers with more opportunities, but they claim it's still out of touch with their reality.

Amsterdam's sex workers want services like HUNQZ.com, where they have the ability to book clients online, which is currently prohibited, Foreign Policy reported. They also want the ability to work from home or visit clients, which is a gray area, according to the Amsterdam government's website (www.amsterdam.nl/en/policy/policy-health-care/policy-prostitution).

Guests will enjoy "four sensual boylesque acts" by Berber performer Juliano Wade, who will be joined by drag chanteuse Bebe Sweetbriar, hoop dancer Dylan Bradley, aerialist David Nguyen, and others as they experience a four-course menu of Middle Eastern and North African cuisine.

An optional wine pairing will be available at an additional cost.

The evening will be the supper club's first-ever LGBT event.

"This is going to be the first time that people are going to see some male belly dancers," said Wade, 33, a gay Colombian man who is producing the fundraising event, noting that it's "not very usual to see males doing this kind of dance."

The event will donate 10% of the proceeds to the LGBT Asylum Project, a legal advocacy organization representing LGBT immigrants and asylum seekers, said Borhen Hammami, operating partner at Berber.

Okan Sengun, 35, is a gay Turkish man and immigration attorney who co-founded the asylum project. He praised Berber for stepping up to host the event, stating it's "very important for Middle Eastern places like the Berber" to show its support for the LGBT community.

"We are very thankful for them doing this," said Sengun, who serves as executive director of the project.

He hopes it will send a signal to the conservative Middle Eastern community in the United States and abroad that U.S.-based Middle Eastern and North African establishments support the LGBT community. Sengun also hopes it will spark a dialogue about LGBT people and ignite change by showing that gay people are not "monsters" or "sick," words many of his clients say their families called them, he said.

"We need as much awareness as possible in the community because we are under attack by the current government in terms of the asylum process," said Sengun, referring to the anti-immigration policies of President Donald Trump's administration. "We need to show that these people are in need of help of the U.S. government."

Sengun estimates that up to 30% of the LGBT Asylum Project's clients come from the Middle East and North Africa regions.

"I really know from my own experience they really help people, and people that really need and want to live here and create a better life," said Wade, who benefited from the project's services.

Wade, who will celebrate his 34th birthday the night of the event, is now able to live openly and to fulfill his interest in Middle Eastern dance after he moved to San Francisco about seven years ago, he said.

For more information about the LGBT Asylum Project, visit www.lgbtasylumproject.org .

Jack Harrison-Quintana, executive director of Grindr for Equality and vice president of social impact at the company, said in a news release that from the founding of the LGBT social network app's social justice arm, "the [Middle Eastern and North African] region has been at the heart of our work at Grindr for Equality."

"We have been honored to stand alongside activists and organizations in support of the LGBTQ+ community in the region, and we look forward to continuing this life-saving and life-affirming work," he said.

Grindr has worked with LGBT organizations advocating for queer rights in Iraq/Kurdistan, Turkey, and Tunisia, and other countries in the region, he said.

Azza Sultan, associate director of Grindr for Equality, said the company was proud to have the opportunity to strengthen its relationship with LGBT organizations in the Middle East and North Africa.

"By supporting organizations from the region, Grindr for Equality is able to help turn their missions into realities to create awareness, safety, and acceptance," said Sultan.

The initiative will award $5,000 and $10,000 grants to LGBT organizations and organizations working with LGBT communities in the Middle East and North Africa.