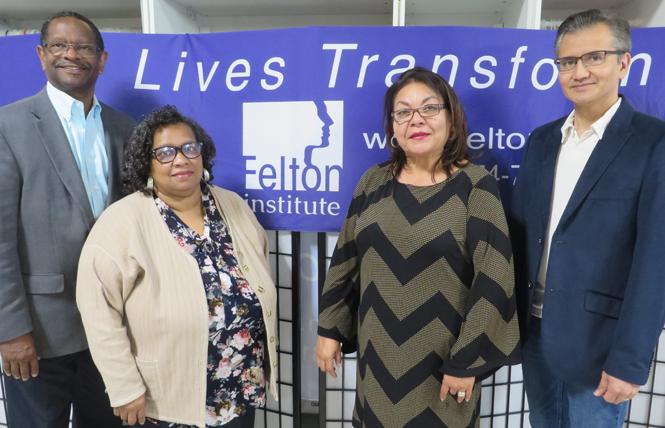 To better provide a "continuum of care," two San Francisco nonprofits, one 57 years old and the other 130 years old, merged last month under the name of the older and larger agency, the Felton Institute, formerly Family Service Agency of San Francisco.

The other merger partner is San Francisco Suicide Prevention, founded by the late gay Anglican priest Bernard Mayes in 1962. Mayes moved to San Francisco in 1960 as a BBC journalist researching San Francisco's suicide rate, then the highest in the United States.

According to Eve Meyer, former executive director of SFSP, when Mayes inquired about suicide hotlines like he had seen in Britain, he was told, "we don't believe in them."

With the LGBTQ community in mind, Mayes handed out matchbooks in Tenderloin bars with his phone number and the words, "Thinking of ending it? Call Bruce." Mayes later founded the public radio station KQED and helped organize National Public Radio.

"We were honored when SFSP reached out to us in 2018," Felton President and CEO Al Gilbert said in a phone interview. "It made sense because we serve many of the same clients. We could provide a continuum of care for people considering suicide."

The merger was finalized June 7.

Peter Rojo, former board chairman for SFSP, said in a phone interview that Felton has created an SFSP advisory committee with nine of the 11 members of the former SFSP board. Rojo has also joined the Felton board. Gilbert and Rojo identify as straight allies.

Asked whether Felton will convert all former SFSP employees to Felton employees, Gilbert responded, "We definitely are." He confirmed the SFSP office will remain downtown.

"We will share all other locations as we think about how we can support our expanded service model," he said.

Gilbert said the current Felton budget is $30 million. He explained that 95% of the funding is from federal, county and state contracts, with the majority of that funding from county contracts.

In 2018, about half of the SFSP budget came from the City and County of San Francisco, the rest from private contributions.

Rojo wrote in an email that SFSP sought the merger because it wanted to preserve its strengths while also figuring out how to deepen its scale and impact.

"Looking back at our history, we have a lot of which to be proud, but looking forward, we can clearly see that our programmatic, operational, and technological infrastructure will benefit from additional support to bolster long-term success," he wrote. "We felt that partnering with Felton Institute will support the continuum of mental health and social services many of our clients need, so they may enhance and stabilize their lives."

SFSP has a budget of about $1.4 million, Rojo explained, and it will support its existing programs under the new organizational structure.

"SFSP made this move to bring suicide prevention into the broader continuum of mental health services and social services," Rojo wrote. "Ninety percent of suicide attempts are related to a mental health issue. The other 10% could be related to someone suddenly experiencing a foundational change in their lives — financial security, losing their home, losing a job, a dramatic change in their family or within their social network."

Gilbert is pleased with how the merger evolved.

"I thought it was so powerful and courageous for an organization that had been around for 57 years to consider 'How can we do things more effectively?'" he said.

"We provide services in 11 different languages including ASL. Our agencies are aligned to serve a diverse demographic in age, orientation, and race," Gilbert said.

Rojo added, "It's important to position ourselves for all the different populations that Felton and SFSP help, who reach out to us in many different ways, any time of day or night."

"The merger of San Francisco Suicide Prevention and Felton Institute will strengthen and preserve crucial prevention, outreach, case management, and crisis intervention services for San Franciscans with mental illness and substance use issues, benefitting people who are experiencing homelessness and people who are housed," Health Director Dr. Grant Colfax, a gay man, said in a news release. "These two organizations have strong track records of providing quality services to those in need, and it is great for San Francisco that they are joining forces."

Rojo said that the Department of Public Health did not request the merger, but was approached by SFSP as part of its vetting process to determine whether it was feasible and an appropriate fit for the two agencies.

Programs
Gilbert described Felton as "one of San Francisco's biggest well-kept secrets" and described some of the programs it offers in five different counties: San Francisco, Alameda, San Mateo, Marin, and Monterey.

Felton runs over 50 programs with special emphasis on the needs of low-income families, children, the elderly, and people living with disabilities, organized within multiple divisions.

Its Children, Youth and Family Division includes food-related services; early care and education programs in multiple locations in San Francisco; outpatient mental health services for children, teens, and their families; programs for infants and toddlers, including those with autism and the medically-fragile; and several parenting programs for teenagers and young parents.

"We provide services from birth to end-of-life," Gilbert said, "and we are the largest outpatient mental health provider in San Francisco. We are very involved in the mayor's programs to eliminate homeless. We also partner with the San Francisco school district to run a high school which helps teens figure out how to be a teenager and a parent, stay in school and have a chance to grow up."

The Adult Division serves low-income and homeless adults seeking employment or with mental health issues, and youth 18 to 25 who have mental health or substance abuse disorders. It has a job readiness program to connect with career opportunities, counseling services for the deaf community, and homeless prevention services including eviction assistance. Several programs assist those in the criminal justice system.

"Our goal is to identify somebody in their first year of having a break and create a process to manage it and address the challenge of living with it," Gilbert said. "We can reduce hospitalization between 50% and 75%."

A separate Training and Research Division works with both employees and outside organizations, offering training tailored to the needs of immigrants, LGBTQs, and other clients. Research projects used Felton's own "client- and community-centered research and program evaluation" to develop what Felton calls a "decision-making toolkit," in partnership with the University of New Mexico and UCSF.

"We created software on the Salesforce platform, now used by 15 other nonprofits across the country," Gilbert said. "We track outcomes so we can demonstrate the value of working with our program."

Felton also works with San Francisco law enforcement agencies to offer alternatives to jail and prosecution for those experiencing mental health, substance abuse, and co-occurring disorders, as well as offering services to prevent recidivism in youths and adults.

Felton will celebrate its 130th anniversary in October with a fundraiser, with details to be announced on its website.