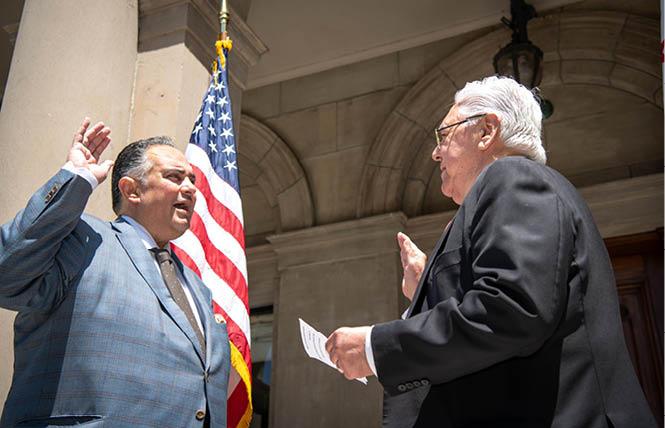 While the Political Notes column was on hiatus the last few weeks, several important developments broke involving a lesbian Latina California Assemblywoman running for higher office and two gay Latino former members of the state Legislature. As they may have gone unnoticed during the Pride Month celebrations and Fourth of July holiday, here are those news items in case you missed them.

First up, as of July 1 a gay man is now chair of the University of California Board of Regents. Gay former Assemblyman John A. Pérez (D-Los Angeles,) the first LGBT person to serve in the powerful Assembly speaker position, has taken over the gavel of the oversight body for the statewide university system.

Pérez had been serving as vice chair of the board and succeeded George Kieffer as chair. His chairmanship expires July 1, 2020, while his term on the regents board runs through March 1, 2024.

Appointed to his seat on the UC board by former governor Jerry Brown in November 2014, Pérez is the first out person to chair the UC board as well as serve as its vice chair.

"I am honored to serve as chair of the board and continue advocating for our students and their families, in addition to the UC community at large," stated Pérez in a news release sent out July 8. "I look forward to working closely with my fellow board members to continue UC's tripartite mission of education, research and public service, while giving our students the tools and resources they need for success at UC and beyond."

His elevation to chair comes almost four decades after the late Sheldon "Shelley" Andelson became the first gay person to serve as a UC regent. Brown also appointed Andelson, who died in 1987 due to complications from AIDS, to the seat 39 years ago.

Gay CA insurance czar lands in hot water
In late June gay California Insurance Commissioner Ricardo Lara made history once again as the first openly gay president of the National Association of Latino Elected and Appointed Officials, known as NALEO for short. Last November, Lara became the first LGBT person to be elected to a statewide position in California by winning his race to become insurance czar.

"I am humbled and honored to lead NALEO during such a historic time for our country, as we develop the next generation of leaders who will put the values of public service ahead of all else," stated Lara in a June 24 news release the day after he was elected to lead NALEO's board.

Days later Lara found himself in hot water when the San Diego Union-Tribune reported July 7 that he had accepted more than $50,000 in donations to his re-election campaign account from several people with ties to the insurance industry he regulates. While the paper noted the contributions weren't illegal, they did contradict Lara's pledge during last year's campaign not to accept contributions from the insurance industry.

Lara, who had been acting as treasurer of his re-election campaign committee, at first did not address the contributions when contacted by the newspaper. It sparked criticism from consumer advocates and raised eyebrows around the state, as his predecessors had refused to accept money from the insurance industry following a scandal that led Chuck Quackenbush to resign from the position in 2000.

Within days Lara announced he would return the money, hire a campaign treasurer, and not accept contributions from people tied to the insurance industry. Several of the checks Lara had accepted came from the wives of insurance company executives, reported the San Diego newspaper.

"I appreciate the San Diego Union-Tribune bringing this to my attention. With California having the nation's largest insurance industry, it is clear that appointing myself as treasurer was insufficient to properly vet all contributions," stated Lara in a response sent to the paper following publication of its article. "As a result, I will be appointing a treasurer to review all contributions for ties to the insurance industry, return any taken in error, and ensure that I fulfill my pledge."

Nonetheless, Lara found himself the subject of scathing editorials last week in several of the state's leading newspapers. The Sacramento Bee called Lara's behavior "shady and suspicious," while the Los Angeles Times said he had engaged in "troubling behavior."

Lucky for Lara, he doesn't have to seek re-election until 2022, giving him plenty of time to put the episode behind him.

Covering the cities of Modesto, Riverbank, Stockton, Manteca, and Tracy, the seat is currently held by lesbian Senator Cathleen Galgiani (D-Stockton). She is term limited from running again next year and has endorsed Democratic Modesto City Councilman Mani Grewal, who is straight, in the race.

With the top two vote-getters in the March primary advancing to the November general election, Eggman and Grewal are likely to be engaged in a tough battle for the seat over the next 15 months. They already have been rolling out endorsements from local leaders in the district and members of the Legislature.

And Eggman's campaign released internal polling in the spring that showed she would defeat Grewal by 66% to 21% in a head-to-head matchup, as the Modesto Bee reported in late May. Since she would be the first out woman of color elected to the state Senate and key to maintaining the ranks of the Legislative LGBT Caucus, which currently numbers seven members, Eggman's race is sure to be a top priority for EQCA.

It has been focused on recruiting LGBT people to run for state Assembly and Senate seats next year in order to ensure the LGBT caucus doesn't decrease in size. Yet only two other non-incumbent out candidates — both Democrats who have EQCA's endorsement — are known to be running to date.

In a news release announcing its endorsement of Eggman, EQCA Executive Director Rick Zbur noted she "has been a steadfast champion for women, veterans and LGBTQ people throughout the San Joaquin Valley in the Assembly, and we can't wait to see her continue fighting for us in the Senate."