Editorial: Harris throws a punch — and lands it 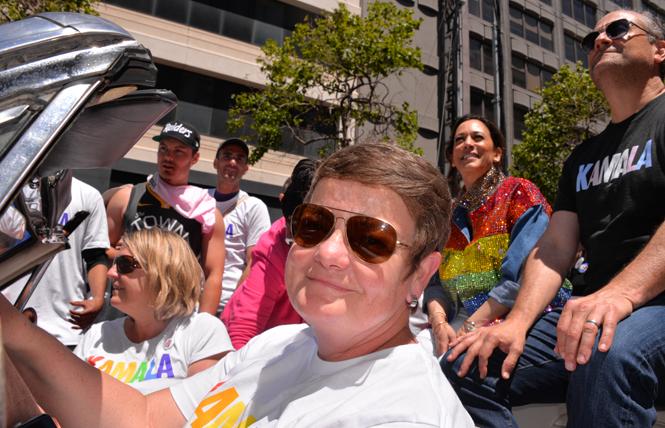 Kamala Harris and her husband, Douglas Emhoff, rode in Sunday's San Francisco Pride parade. They were driven by Kris Perry, who was joined by her spouse, Sandra Stier. Harris married the women in 2013. Photo: Bill Wilson

Former Vice President Joe Biden's performance in the first Democratic presidential primary debates punctured his aura of an inevitable frontrunner and sowed doubts among primary voters and pundits. As was the case during his kick-off rally in May, Biden appeared rusty and, when confronted by California Senator Kamala Harris on the debate stage, was flummoxed. After Harris raised his record on school busing and his recent comments bragging about his success working with segregationist senators early in his Senate career, he was plainly caught off guard.

"And it was not only that," Harris said, "but you also worked with them to oppose busing. And you know, there was a little girl in California who was part of the second class to integrate her public school and she was bused to school every day. That little girl was me."

With those comments, Harris delivered a punch to Biden's gut. In fact, during his response he stepped in it again, saying he opposed busing mandated by the federal government, which was exactly Harris' point: that the feds need to step in when cities and states discriminate. Unable or unwilling to discuss the issue anymore, Biden said, "My time is up — sorry." (It's not a good sign when a presidential candidate cedes time during a debate.)

While Harris won the night, it's become apparent to us that Biden's big problem is that he refuses to apologize — for anything. We already have a president who won't admit he was wrong. Biden's lengthy record contains mistakes, and he should own and move beyond them.

Even before he entered the race, he faced accusations of his handsiness with women and some said his actions made them uncomfortable. He has not apologized, and in fact, has continued telling creepy jokes on the campaign trail. Last month during a campaign event in Iowa, he told two teenage boys "to keep the guys away from your sister."

He called Anita Hill to express his "regret" for what she endured during the Clarence Thomas hearings. But regret is not the same thing as an apology, and Biden, who was chair of the Senate Judiciary Committee, should have taken responsibility for the horrendous way she was treated at the time due in large part to how he handled the hearings. Hill told the New York Times that she was "dissatisfied" with Biden's comments.

Even before Harris took on Biden, New Jersey Senator Cory Booker, the other black presidential candidate in the race, was critical of his comments about working with segregationists. Biden called Booker but wouldn't apologize. Over the weekend, Biden made another tone-deaf comment. "That kid wearing a hoodie may very well be the next poet laureate and not a gangbanger," he said at the Chicago headquarters of the Rainbow PUSH Coalition, a group of nonprofits organized by the Reverend Jesse Jackson.

Gay South Bend, Indiana Mayor Pete Buttigieg also needs to do a better job connecting with African American voters. He's dealing with a full-blown crisis in his hometown after a white police officer shot and killed a black man last month. Inflaming public anger is the fact that the officer did not have his body camera turned on, as is department policy. Buttigieg, at least, acknowledged during last week's debate that the responsibility for not diversifying the city's police department falls on his shoulders. "I couldn't get it done," he said when asked why the department is only 6% black when the city's black population is 26%.

Buttigieg and his husband, Chasten, who filled in for him at the World Pride Stonewall 50 march Sunday, have dialed down their near-constant social media presence in recent weeks — that's the sensible and respectful thing to do. It was also a good decision by Buttigieg to return home, where the South Bend Tribune reported that he joined black church leaders Monday in prayers for peace in the city-county building. The paper reported that he has sent a letter to the U.S. Justice Department seeking a review of the case and urged more public input over policies that govern the police department.

The Democratic presidential race will turn on support — and votes — by African Americans. So far, many of the two-dozen candidates have demonstrated that they have work to do in this area. They should use the time before the next debates to speak directly to the African American community.