Chasten Buttigieg steps in for husband during Stonewall 50 parade 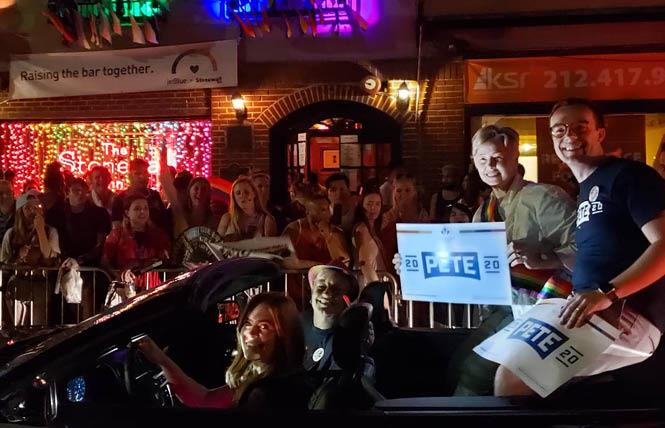 Chasten Buttigieg, the husband of Democratic presidential candidate Pete Buttigieg, stepped in for his spouse Sunday during the World Pride Stonewall 50 march in New York City.

Chasten rode with LGBTQ Victory Fund CEO Annise Parker Sunday night as the march passed in front of the historic Stonewall Inn, which was raided by New York City police 50 years ago, giving birth to the modern gay rights movement.

Last Friday, the Victory Fund, a political action group that works to elect LGBTQ people to office, formally endorsed Pete Buttigieg, the mayor of South Bend, Indiana, for president. It marked the first time the organization had made a presidential endorsement and took place on the 50th anniversary of the Stonewall rebellion.

"I'm incredibly excited to announce — for the first time in Victory Fund's 28-year history — we are endorsing a candidate for president of the United States," Parker said in a news release. "We're standing with Mayor Pete Buttigieg, the first openly LGBTQ Democratic presidential candidate in American history."

It is also the first national organization to endorse Pete Buttigieg.

He was on hand in Brooklyn for that announcement, but later left to return to South Bend, where his city is engulfed in an officer-involved shooting incident that left a black man dead.

The Buttigieg campaign reported Monday that it had raised $24.8 million in the second quarter, which ended June 30. That's a significant increase from the $7.1 million the campaign reported raising in the first quarter.

Alameda County Superior Court Judge Victoria Kolakowski was also in New York City for Stonewall 50 events. She, too, marched with the Victory Fund, which had endorsed her successful judicial campaign back in 2010.