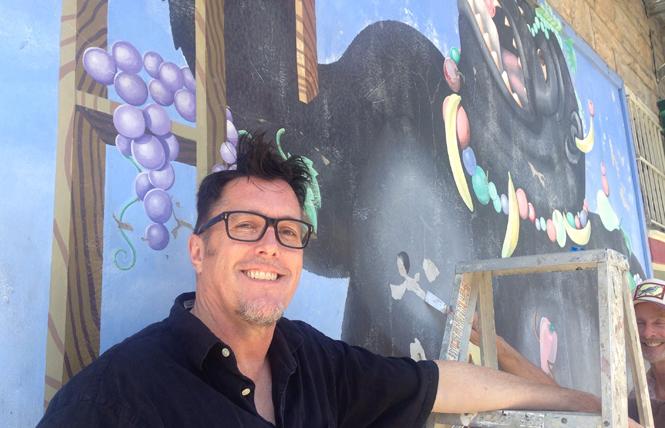 The "Laughing Gorilla" mural isn't the best-known piece of public artwork in the city. Located on 19th Street at Castro, the tail end of the rainbow-bedecked heart of the neighborhood, it's a bright colored work that came out of two dark events in San Francisco: the 1989 Loma Prieta earthquake and the AIDS epidemic.

Thirty years later, the mural remains as a testament to both, and one that gay artists Donald Harvey and Michael Ritter are working to restore.

Originally painted by David Seibold, the "Laughing Gorilla" mural was commissioned by the building's owner, Jean Seto, following the 1989 earthquake. Damage was done to the building's faux brick facade, and the specific covering was no longer available. Rather than spend countless hours looking for a replacement for the facade, Seto asked Seibold to paint a mural.

"He made this beautiful piece," Seto, a straight ally, said in a phone interview. "I'm very proud of this."

The mural, which features a gorilla raucously laughing as he breaks through the side of a building, is fading, and the original artists' names have worn off completely.

"The two artists (Seibold and his partner, Luis da Rosa) made it possible and have since passed," said Seto. "The idea is to honor the original artists."

Seibold and da Rosa opened the queer art space Art Lick at 4147 19th Street in 1989. They ran it together for three years during a very tumultuous time for the gay community in San Francisco.

"It really was the height of the AIDS epidemic here," said Ritter. "With the mural, I think he wanted to do something lighter. Something funny."

Because the mural was on the side of a health food store, currently Buffalo Whole Food and Grain Co., Seibold included fresh produce as part of the motif. The piece is reflective of its surroundings while also being surreal and irreverent.

The restoration started June 12 and should be completed this week. Lead muralist Harvey is optimistic that they will reach their goal.

"We're cleaning it, then sealing it all up, then restoring all the colors and varnishing," he said, when asked about the steps in the restoration. "A lot of what we do is dependent on the weather, so, hopefully, that will be on our side."

Environmental factors like wind and moisture can affect whether the muralists can work. In San Francisco, this can prove to be a challenge for any outdoor art project, as well as the factors that cause murals to fade, but Harvey is surprised at the condition of the piece. The worst part of the damage, and what he considers the most important to the restoration, is the artists' signatures.

"They're completely gone," he said, pointing to the wood border that surrounds the mural.

Ritter and his colleague, Meredith Clark, spearheaded the fundraising, and were able to raise about half the money they needed via a GoFundMe campaign. With the help of Harvey, who was one of Seibold's closest friends, and a crew of volunteers, the project got underway.

"We had started talking about it before winter," Ritter said, "but we didn't think we could finish it in time." With the heavy rains this season, it was lucky they held off until June.

Regardless of when the restoration is complete, there's going to be an unveiling ceremony, and both the team of muralists and the building owner are excited to show the neighborhood what they've done.

"Jean was just thrilled when we contacted her and said we want to restore it," Ritter said of Seto. "She's always loved the mural."

Harvey, who now lives in Portland, Oregon, hopes to be here for the event. His admiration of the piece was obvious during a visit to the site, and he smiled and laughed while discussing it.

"If it needs a touch up, I'll always come back and touch it up," he said, "for the rest of my life."

In a time when there's a lot of talk about the loss of the art culture in San Francisco, this restoration project became a poignant task. Its history is rooted in the Castro and the turbulence that the gay culture survived through the years there but it is itself comical and lighthearted.

"I think he (Seibold) didn't want to do something political," Ritter speculated. "He wanted something jovial."

For building owner Seto, the mural is a small part of a larger narrative even if the artist didn't create it from a political standpoint.

"It's time to appreciate what happened in this neighborhood," she said in reference to everything from the AIDS crisis to displacement. "Very happy the neighborhood supported this restoration."

To donate to the GoFundMe campaign, visit https://bit.ly/2L7OAJV.