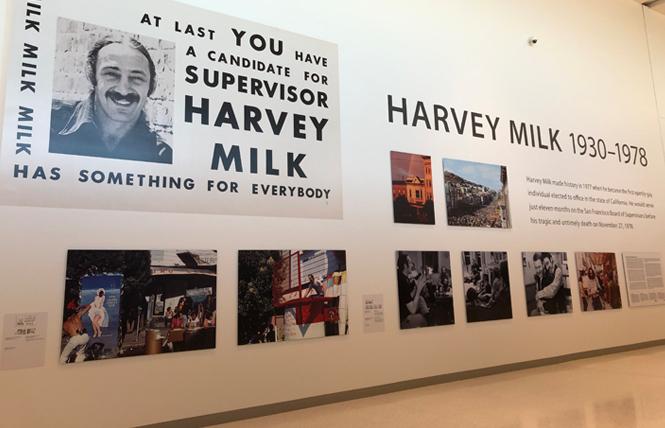 A mammoth temporary exhibit on Harvey Milk at San Francisco International Airport will open next month, coinciding with the opening of part of the new Terminal 1 that will bear Milk's name. Photo: Matthew S. Bajko

For months city officials and LGBT advocates fought with San Francisco International Airport staff over the font sizes and the order of the wording for the signage at the new Harvey Milk Terminal 1.

This spring, timed to the annual Harvey Milk Day observance on his birthdate of May 22, SFO staff released images of the proposed exterior sign for the building that finally met with approval from those pushing to see a proper honor for Milk.

It is the first airport facility in the world named after an LGBT leader, as Milk was the first gay person to win a political office in San Francisco and California with his 1977 election to a seat on the Board of Supervisors. Tragically, disgruntled former supervisor Dan White killed Milk and then-mayor George Moscone inside City Hall the morning of November 27, 1978.

A permanent exhibit detailing Milk's life and his place in history will be incorporated into the under construction terminal in an area the SFO Museum is calling the Central Inglenook. Some of the 40 images it will include have been incorporated into a temporary installation about Milk opening to the public on July 23 when the first nine-gate section of the new Harvey Milk Terminal 1 becomes operational for Southwest and JetBlue flights.

It is mounted on a wall that runs the length of the terminal constructed to block off the rest of the facility still being remodeled. It measures 380 feet long by 30 feet tall and will come down sometime in 2021.

The exhibit features oversized images of Milk, his campaign ephemera, newspaper clippings, letters, and news releases. Two of the more famous photos chosen show Milk walking with his partner, Scott Smith, and supporters to be sworn into office January 8, 1978 and the couple sharing an embrace in Milk's Castro Camera Shop.

The sheer scale of the exhibit shocked and overwhelmed political leaders and LGBT community members invited to a private, sneak peek of it Friday, June 21. The Bay Area Reporter was the only media organization granted special access to the event.

"When I first walked in my initial reaction was is it supposed to be this big? It is extraordinary. It takes your breath away," said District 9 Supervisor Hillary Ronen, who led the legislative fight to force the airport to prominently feature Milk's name in the signs for the terminal. "I was tearing up. I have enormous pride right now. San Francisco is a very special city because of people like Harvey Milk."

Her predecessor, David Campos, a gay man who is now chair of the San Francisco Democratic Party, first proposed in 2013 naming all of SFO after Milk. When that proposal didn't fly with much of the public, Campos and the late mayor Ed Lee compromised on naming one of SFO's four terminals after the beloved gay leader.

Ronen, who had worked for Campos as a City Hall aide, pushed to ensure that happened after joining the board in 2017. Seeing their work come to fruition for the first time Friday night was also emotional for Campos.

"It is really amazing to see the scale of it. It is hard not to be emotional about it," Campos told the B.A.R. "It's like Harvey has come to life. The scale and magnitude of the installation is key to that."

Noting that securing the aviation honor for one of his heroes has "been a struggle" from the get-go, Campos said, "It is difficult to process. I was struck by the great job they did."

Helping to curate the exhibit was Tim O'Brien, assistant director and curator of exhibitions for the SFO Museum. In addition to sorting through the submissions sent in by the public for the installation, O'Brien and the other curators, in particular Kai Caemmerer, delved into the archives of the GLBT Historical Society and the James C. Hormel LGBTQIA Center at the San Francisco Public Library.

They also combed through the collections of photographers who were contemporaries of Milk, like Daniel Nicoletta and the late Crawford Barton, who documented that era in the city's history through the lens of their cameras.

"It was extremely difficult," said O'Brien, who is a straight ally, to cull through the material and choose the 97 different images and archival pieces to include in the temporary installation. "We are hoping with this installation that the people who know this history and lived this history ... we want for them to celebrate it. We also want to educate those who may not know their story."

A favorite part of the installation for O'Brien is the intimate portrait of Milk hugging Smith early in the morning. Titled "Two Lovers," it was captured by their friend Marc Cohen, who was visiting from New York in 1974. According to the wall text for the image, Cohen befriended the pair in the mid-1960s working together in experimental Off-Broadway Theater.

"To me, it is one of the iconic photos of Harvey. It shows him as a person and not as a politician," said O'Brien.

One thing that struck O'Brien from the research he did into Milk's life was realizing how much of an impression working in the theater world of New York City left on Milk. The Woodmere, New York native served as a production associate for Broadway musicals such as "Jesus Christ Superstar" and "Hair."

"It impacted Harvey's politics and his success in politics. He learned about stagecraft and he employed that to great effect here in San Francisco when he ran for office," said O'Brien.

Former District 8 Supervisor Bevan Dufty, a gay man who served in what is considered to be Milk's seat on the board, pointed to a gigantic version of a campaign poster Milk used during his unsuccessful bid for a state Assembly seat in 1976 as one of his favorite images in the exhibit. On a blue background white lettering declares "Harvey Milk vs. The Machine" and urges people to vote for him in the June 8 primary.

"It surpasses what any of us expected," said Dufty, now president of the elected board for the regional BART transit agency that has a station at SFO. "It is a spectacular assemblage of Harvey Milk's life and career."

Milk contemporary Tom Ammiano, a gay teacher who came out of the closet to assist with the campaign Milk and others waged to defeat a 1978 ballot measure that would ban LGBT people from working in public schools, is featured in the exhibit. He joked that Milk, "a size queen, always, sorry Harvey," would be both "amused" and "totally humbled" by the installation.

"What a tribute this is," said Ammiano, who would become the first gay person elected to the city's school board in 1990 and go on to serve on the Board of Supervisors and in the state Assembly. "He was murdered. It is a hard thing to cope with but it is important to remember. It is why we are here. This helps sustain his legacy."

Ammiano told the B.A.R. one of the images he liked the best in the exhibit was of burning police cars taken during the White Night riots. Gays and others upset by a San Francisco Superior Court jury's convicting White on the lesser charge of voluntary manslaughter erupted in anger the night of May 21, 1979, and clashed with police in front of City Hall.

"I got a little stiffy," Ammiano, a comedian, joked about seeing the photo. Taking a more serious turn, he pointed to the photo of Milk being accompanied to his swearing-in ceremony and noted, "So many of the men seen there are all gone. I don't remember all their names, but their faces I recognize."

Along with the permanent exhibit and signage for the Milk terminal, there will also be several art pieces inspired by his life included in the $2.4 billion remodel of the facility set to be complete by 2023. O'Brien told the B.A.R. that by March 2020 anyone arriving at the airport will be able to see the portion of the Central Inglenook Milk exhibit outside of the secured area of the terminal.

Alex Walker, a gay man who served on the advisory committee that selected Terminal 1 to be named after Milk, told the B.A.R. that the SFO Museum's temporary exhibit surpassed anything he had imagined would be installed.

"I can't wait to come through here as a passenger. It makes me so happy," said Walker. "And I can't wait for the public to see it."

For more information about the project, visit https://www.flysfo.com/about-sfo/airport-development/t1 .