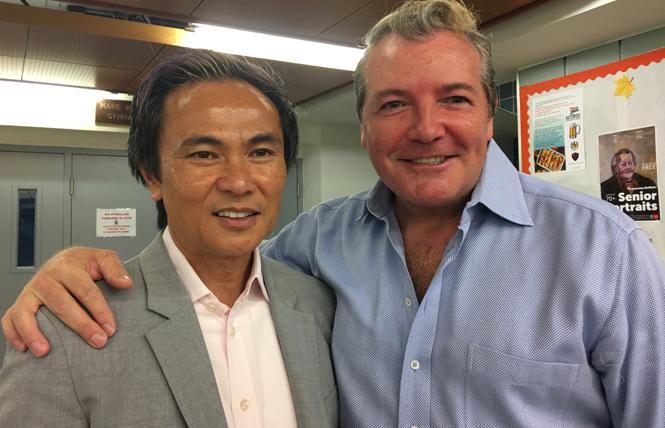 Two new cannabis retail stores have been approved by the San Francisco Planning Commission, including one in the Castro that will be owned in part by two gay men.

At its June 13 meeting the commission voted to approve the applications for conditional approval for new stores, one to be located at 3989 17th Street near Market, and the other at 1398 California Street near Hyde.

Both stores intend to sell medical and recreational cannabis and neither has applied for onsite consumption, which must be approved by the San Francisco Department of Public Health.

The Castro store, now known as Eureka Sky (it was previously called Sugar), will be located adjacent to Jane Warner Plaza in a ground floor storefront that was formerly the home of the Wild Card, which closed in 2018 after 22 years in the neighborhood, citing neighborhood crime and blight.

Partnering on Eureka Sky as applicants are Ray Connolly and his husband, Desmond Morgan, who received unanimous approval for their concept from the Castro Merchants last year. At press time, the men did not return a phone call for an update on their plans. They had promised to return to a future merchants meeting following their appearance at the planning commission.

Prior to its hearing last week, the planning commission received 52 letters of support for the store, more than half of which were form letters. A handful of people spoke in favor of Eureka Sky, with one person who said he thought the store could lead to more illegal use of drugs at the adjacent plaza, an ongoing problem.

But Connolly promised that the storefront would contain at least six onsite cameras to monitor the behavior of customers. Anyone seen smoking on the street will be prohibited from buying at the store in the future, he said.

The couple, who have no prior experience in the cannabis industry, had twice attempted to open retail cannabis stores in the city, one near Fisherman's Wharf and one at 2352 Market Street, but both applications were subsequently withdrawn.

The partner for the proposed store on California Street is California Street Cannabis Company. It also received overwhelmingly positive testimony at the hearing. One person spoke in opposition, claiming a different type of business would be more beneficial to the neighborhood.

The city's first equity applicant to be approved was the Cole-Ashbury Group, which intends to open a retail cannabis shop at 1685 Haight Street.

The Castro currently has one dispensary, the Apothecarium, located at 2029 Market Street, across from Safeway. Currently, there is another applicant for a retail dispensary at 258 Noe Street, at Market, currently a nail salon. The Noe Street dispensary will be named Flore Store, after its owner's restaurant, Flore, which is across the street at Noe and Market streets. Flore owner Terrance Alan could not be reached at press time for an update. There are no onsite consumption lounges in the Castro's immediate future.

Updated, 6/20/19: This article was updated. The original version included the name of former Commissioner Rodney Fong when it should have been current Commissioner Frank Fung.