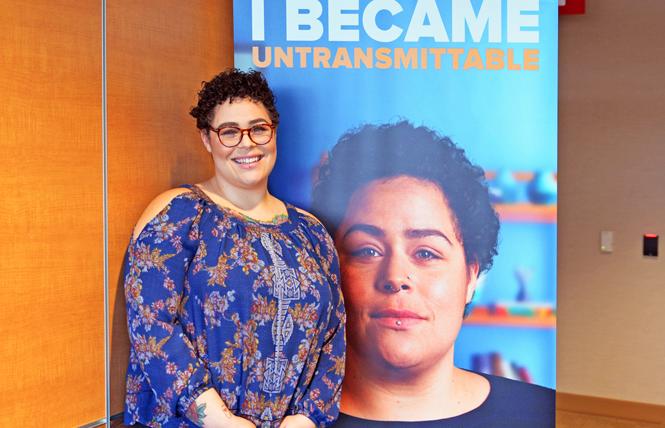 Spokesmodel Rikki Vick, born with HIV and living with undetectable virus, stands in front of a poster of herself that is part of Santa Clara County's new U=U campaign. Photo: Jo-Lynn Otto

Faces of five Santa Clara County residents living with HIV have begun showing up in ads on public transportation; at bars, clubs, and restaurants; and in social media feeds as they share a message: undetectable equals untransmittable.

In other words, if an HIV-positive individual is taking their medications consistently they can decrease their viral load to the point that the virus is undetectable and can't transmit it to their sexual partners.

Santa Clara County health officials and HIV/AIDS advocates called the U=U campaign, as it's known, a game changer and incredibly important for people living with HIV/AIDS, their loved ones, and the broader community. (The ad has also appeared in the Bay Area Reporter.)

In 2017, the most recent statistics available, 3,361 people diagnosed with HIV were living in the county, according to the U=U campaign news release. That year, there were 156 new HIV diagnoses. Of the total population living with HIV in the county, 40 percent are Hispanic.

Rikki Vick is one of the U=U Campaign spokesmodels.

The 28-year-old pansexual woman was born with HIV and has been living with undetectable levels of the virus for years.

She said that the campaign is important to her because the messaging and education about HIV/AIDS is outdated.

"The most important thing is the conversations that we've had around HIV/AIDS have been very cryptic and very scary, especially what we are taught in schools. It's still being taught that you have the possibility of dying," said Vick. "I think that opening up a conversation about that it's not a death sentence anymore is very important, but also to help yourself from contracting HIV."

Vick said that she is proud to participate in the campaign because she's part of the move to change the conversation, especially around removing the stigma often associated with HIV, as she stands in solidarity with other HIV-positive undetectable members of the community.

"It makes me feel less stigmatized. It also educates other people," said Vick, who is hoping to attend law school.

She believes the campaign will lead to increased preventative care. She's already seen one case where a friend recently got tested after they had a conversation. Her friend is now on PrEP, Vick said.

PrEP, or pre-exposure prophylaxis, is an HIV preventative drug (Truvada) prescribed to HIV-negative people who are at high risk of contracting the virus. It has been shown to be very successful if taken as prescribed.

Recently, San Francisco health officials have started touting a new PrEP dosing regimen. Dubbed PrEP 2-1-1, it is designed for those who are only intermittently sexually active. It requires a person to take two pills of Truvada (tenofovir/emtricitabine) at least two hours — but preferably 24 hours — prior to engaging in sex. They then take another pill 24 hours later, and if done having sex, a final pill another 24 hours after that.

Changing the conversation
"Our goal is to really change the conversation around HIV," said Rudman, a 35-year-old straight ally. "Not only for people living with HIV hearing the empowering message that they can protect their own health and the health of their loved ones, but for the entire community around them to understand how much HIV has changed."

Rodrigo Garcia-Reyes, a health education specialist for the health department, called the campaign a "breakthrough in science and society."

"We are far from where we were at the beginning, and possibly closer to achieving zero related deaths, zero HIV stigma, and zero HIV infections," said Garcia-Reyes, 48, who declined to state his sexual orientation, referring to when the HIV/AIDS epidemic started and people were dying in rapid numbers in the 1980s and early 1990s.

"This campaign really can change the conversation about what we thought HIV was," he added. "Now people who live with HIV shouldn't fear loving other people and having healthy lives just like anyone else."

Garcia-Reyes wants newly diagnosed people to know that they have many options to live their lives.

"By removing that stigma, we are opening doors for people to access to treatment early enough so they can become undetectable a lot quicker," he said, noting that Santa Clara County provides that to residents diagnosed with HIV.

The U=U campaign is a part of Getting to Zero Santa Clara County-Silicon Valley, a four-year initiative that strives for zero new HIV infections, zero HIV-related deaths, and zero HIV-related stigma, according to the release.

Santa Clara County is one of several jurisdictions in California and other states that have launched a Getting to Zero campaign.

The county's public health department joined with about 70 community partners to create the campaign, said Garcia-Reyes.

Launched earlier this month the bilingual — English and Spanish — campaign will run through June.

Rudman knows that the impact of the $175,000 campaign won't be able to be measured for years, but the cost is "actually less than half of what we would save if we prevented one HIV case," she said about the "the first of its kind in California and the first bilingual campaign."

"The CDC says that each new HIV case costs about $365,000," Rudman said. "So, while it's a big investment on the part of the county, we know that it is one that will come back to benefit us."

For more information on the campaign, visit www.hivhaschanged.org.