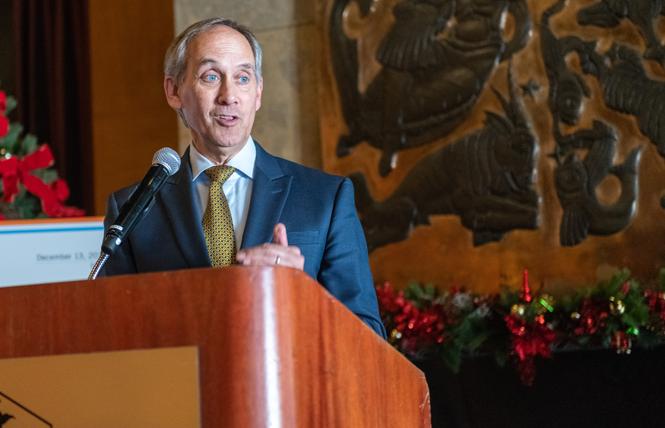 Two recent needs assessments in the Bay Area indicate that a significant portion of LGBTs feel unsafe in certain environments, have trouble accessing LGBT-specific care or other services and needs including housing, and have a desire to feel more connected to their own community.

The San Mateo County LGBTQ Commission, in conjunction with the San Mateo County Health Department's Office of Public Health, Policy and Planning, released a wellness assessment of the county's LGBT residents earlier this year. It surveyed 479 adults and 54 youth in 2018.

Horizons Foundation said this is the first time in more than 20 years that a survey has been conducted that addresses a broad spectrum of needs for LGBT people living throughout the Bay Area. The majority of respondents were ages 25-64, but data from people of all ages was collected.

"There are many who believe, some in our own community, that those of us who are LGBT living in the Bay Area — that we are doing just fine," Roger Doughty, president of Horizons, told the Bay Area Reporter. "There is a myth out there that LGBT people don't have significant needs. This survey shows that this is simply untrue. LGBT people deal with difficulty to meet basic needs or to access essential life services and even as fundamental a matter as personal safety."

To Doughty and Francisco Buchting, vice president of grants and programs at Horizons, the most striking data from the survey surrounded personal safety, LGBTs being unable to access basic services, and that a portion of LGBTs don't feel connected to the LGBT community.

More specifically, the data reveals that 34 percent of respondents feel unsafe more often than safe or unsafe most, or all, of the time in at least one facet of their lives. And more than half of the LGBTs who took the survey (60 percent), indicated concerns about their safety limiting where they can live, work, and get health care.

"When people feel concerned about their safety that is going to affect, deeply, their experience of the world," Doughty, a gay man, said. "Even if not attacked for example, if every time they go outside and they're concerned with what might happen to them that affects everything, from their ability to be present, enjoy themselves, or even their decision to leave their home."

On this particular data point, Buchting emphasized that respondents' biggest concern in terms of their safety was interacting with police.

The San Mateo survey revealed that more than two out of three adults feel safe at home, with their family, at work, in parks or recreational areas, and in health care facilities. Fewer than one out of three, however, feel safe in senior housing, long-term care, transitioning medical care, the military, or jail.

Additionally, more than 40 percent of adults said they do not feel most people in San Mateo County are accepting of LGBT people. And 23.3 percent were called names or insulted due to sexual orientation or gender identity.

The results also showed serious concerns among younger respondents. Eighty percent of the San Mateo County youth surveyed heard negative messages about being LGBT at school. Similarly, more than 90 percent of younger participants said they do not hear positive messages from leaders in their communities. More than 75 percent of youth said in the past year that they considered harming themselves.

"What is clear from these surveys is that San Mateo County has done much to promote a welcoming and safe environment for the LGBTQ community," Supervisor Dave Pine, the board liaison for the commission, said in a statement. "That said, it is equally clear that much work remains to be done, particularly with our youth."

The survey results, which included separate questions for adults and adolescents, reflected the participants' strong desire for inclusion and visibility in their respective communities.

Trouble meeting basic needs
Other more dramatic statistics from Horizons' survey, according to its team, is that one in five, or 21 percent, of respondents have had trouble meeting at least one basic need — shelter, food, medicine, transportation, or gas, electric, or water in their home — because of economic hardship in the past year. Almost 17 percent of the people who took the survey have been homeless at some point in their lives. Among youth, 20 percent had an especially high rate of unmet need for housing services.

In terms of access, one in three respondents were not able to access at least one needed service in the past three years. Just under 50 percent of San Mateo respondents said they had difficulty accessing housing.

Something that may be anecdotally well known and was confirmed in Horizons' survey is that LGBT respondents were more likely to have greater unmet basic needs and unable to access needed services if they have an income of less than $60,000 a year; were transgender, nonbinary, or bisexual; a person of color; under the age of 25; have lived in foster care; or have a disability.

"This illustrates just how large the portion of our community is that deeply values and needs LGBT-specific services and confirms just how important our own community organizations are as well as other groups that have other dedicated LGBT services," Buchting said.

San Mateo's survey had similar findings. About 55 percent of adult respondents found it difficult to access LGBT groups/resources and 52 percent said the same for trans-specific medical services. Two out of three adults felt that not enough health professionals are adequately trained to care for LGBT people and one out of three feel medical personnel will treat them differently because they are LGBT. Although the majority of LGBT youth respondents said mental health care services and LGBT groups/resources were extremely important, seven out of 10 youth reported they did not know where to go for LGBT-friendly health care.

Lastly, something noted by the Horizons' team was that 32 percent of respondents indicated that they do not have a connection to the LGBT community where they live in the Bay Area. Although a majority of respondents said they have attended an LGBT-specific event in the past three years, a quarter said they do not consistently get what they need from those events. One-third (38 percent) of people of color felt there was a lack of sensitivity to them at the events. This was reported among transgender and gender fluid respondents as well.

The results of Horizons' survey are important for many reasons, Buchting and Doughty said, including that it contains critical findings for LGBT nonprofit leaders, activists, donors to LGBT organizations, and foundation and corporate funders. The team hopes it can help bring awareness to the continued needs of the Bay Area LGBT community.