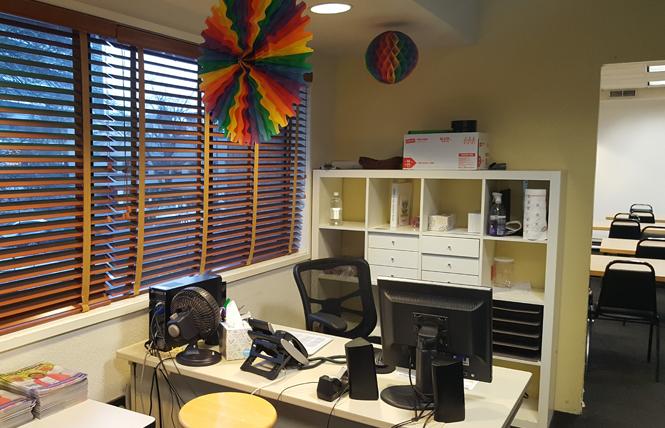 The Rainbow Community Center was open late Monday afternoon, but no one was at the front desk. Photo: Cynthia Laird

Here's a pro tip for all LGBTQ nonprofits: If you're going to lay off a majority of a department's staff without concurrently issuing a formal explanation about why this is happening, don't be surprised when you get press inquiries. And for goodness' sake, talk to the media when contacted.

That's the tough lesson learned late last month by the board and executive director of the Rainbow Community Center in Contra Costa County. The Concord-based center terminated four clinical department staff positions and its food pantry program manager. Most egregiously, according to our sources, the clinical staff were given 10 minutes after they were told on Friday, February 22, to gather their belongings before being escorted out of the building. As we reported last week, "Their sudden departure left them little time to contact their patients to inform them that their counselors would no longer be able to see them." The counselors' inability to properly end or transfer their cases violates the profession's ethical code, several sources told us. When a client leaves a counselor, typically there is a closure session and a referral to another provider; that this appears not to have happened could be traumatic for Rainbow's clients.

After our article was published, we received some criticism that the piece was "one-sided." One of those complaints came from the center's board chair, Ken Carlson, a gay man who's also an elected member of the Pleasant Hill City Council. He was informed that the sole reason the article appeared to have predominately one view — that of the fired workers — was because neither he nor Executive Director Kevin McAllister responded to requests for comment. McAllister did speak with reporter Matthew S. Bajko for a few minutes at deadline, and his comments were included in the article. Tellingly, no one who contacted us called questioned the substance of the article. If center officials thought we would hold a news article because they didn't return our calls, they were operating under an illusion.

The center did not release a statement until after our article was published online last Wednesday afternoon. Even then, the statement made no reference to layoffs, and alluded to "restructuring." It states, "The Rainbow Community Center ... will limit its services while preparing for new programming. While its food pantry will be limited during the reorganization, mental health counseling, training, HIV testing, and limited youth services will still operate through Rainbow during the restructuring. Rainbow will also complete the remodeling of its Service Center/Community Space during this time."

This week, center officials seem to have received the message, and our article in today's paper includes comments from Carlson, who has acknowledged he handled the situation poorly. McAllister was not at the center when the Bay Area Reporter stopped by Monday evening, just before closing. We were told he'd be out of the office for a couple of days.

We cannot emphasize enough how important LGBTQ community centers are. Decades ago, bars were one of the few places queer people could meet others like them and socialize. Community centers offer an important alternative without the booze. They offer youth and those in the sober community a place to meet others or get help. Today, LGBTQ centers operate under a variety of models. Some are large, like the Los Angeles LGBT Center. Others, like the centers in Oakland and Berkeley, are smaller but mighty, and succeed through the dedication of staff, volunteers, and the community itself. Rainbow is not a large center, but it has been around for many years and is part of the fabric of the East Bay's LGBTQ community. Residents there deserve a center that is open and provides services. Officials sent the B.A.R. an updated statement noting the center has hired a hired a licensed clinical psychologist with 18 years of mental health experience to manage its "School Based Counseling" program. The restructuring should be completed as soon as possible.

Contra Costa County is not San Francisco. There are not as many easily accessible resources for LGBTQ youth and adults, which is why the community center in the suburbs is so critical. It's unfortunate that Rainbow's leaders acted so unprofessionally in their initial handling of the staff changes. We hope that the leaders' newfound transparency continues, and urge the center to keep the community informed about what is going on and what specific services are available during this reorganization.