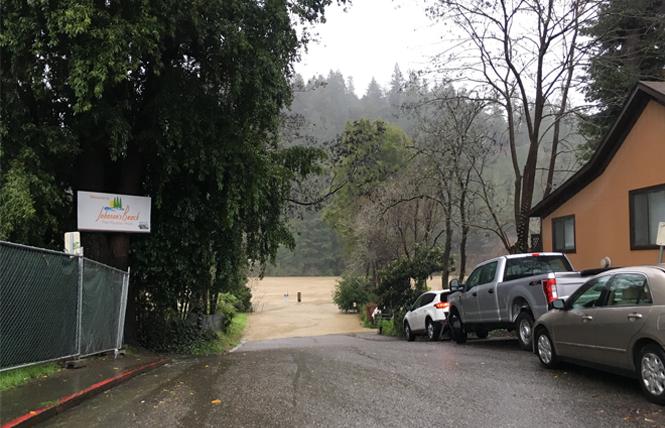 People living near the Russian River were ordered by officials to evacuate Tuesday, as another atmospheric river pushed the muddy river over the 32-foot flood level.

The National Oceanic and Atmospheric Administration website indicated the river exceeded flood stage Tuesday at 4 p.m. It was expected to crest at 46.1 feet Wednesday and drop back below flood level by 11 p.m. Thursday.

At 10 a.m. Tuesday, the Sonoma County Sheriff's office issued an evacuation order for anyone living near the Russian River and its tributaries because the river was forecast to go above flood stage by 6 p.m. The order stated that evacuating would help clear the roads for emergency vehicles during the high water.

Guerneville is in the unincorporated part of Sonoma County and police services are provided by the sheriff's office. The office issued the evacuation order via the Wireless Emergency Alert (WEA) system, SoCoAlert, and other social media tools.

At the 40-foot level, according to NOAA, travel on Main Street in Guerneville becomes difficult, which potentially complicates evacuations. Businesses are also impacted. As Jeff Bridges, general manager of the R3 Hotel, noted, "the back of our property takes water at 39 feet but we're not actually flooded until 42 feet."

In an email Tuesday night, gay Guerneville resident Dave Davis observed, "This one came rather quickly for me. The ground was already completely saturated by the previous St. Valentine's Day event ... the water has no place to go, but to the river. This weather system is also affecting Mendocino County to the north, upstream."

He added, "We do not know anyone [at this time] who's been evacuated."

During the February 14 storms, the river reached 38.5 feet but major flooding was avoided in town.

Power supplied by Pacific Gas & Electric Co. is another local concern in periods of heavy rain.

Two weeks ago, PG&E shut off power to downtown Guerneville for only 30 minutes. Robert Frederick, co-owner of Rainbow Cattle Company bar in Guerneville said, "PG&E seemed more prepared than in past years."

By Tuesday night, about two-dozen roads in the area were already closed, including Armstrong Woods Road in Guerneville, Main Street and Bohemian Highway in Monte Rio, and Trenton Road in Forestville. The county had also set up two shelters for evacuees, in Sebastopol and Santa Rosa.

Rising floodwaters led the west county's Sweetwater Springs Water District to issue a precautionary boil notice for those with severely compromised immune systems, as well as for some elderly people and those with infants. Sweetwater serves customers in Guerneville and Forestville. Residents were notified via an automated phone system.

Flooding is not the only risk in a high rainfall period.

The county announced in a news release that "current weather conditions and soil saturation levels are creating conditions for mudslides ... The potential for these conditions are prominent throughout the hillside neighborhoods in the Russian River region. Areas that burned in the 2017 Sonoma Complex fires are particularly vulnerable to mudslides."

Fortunately, the closest burn area to the Guerneville/Monte Rio area is in Santa Rosa, about 15 miles away.

The county also cautioned residents to watch for leaning trees and utility poles and provided free sandbags at locations in Forestville, Guerneville, and Monte Rio. Schools in the West County were closed as of Tuesday.

"This local River Rat (a true moniker to those of us who ride out floods, regardless of orientation) understands that it's truly up to Mother Nature," commented Davis.

Elise VanDyne, executive director of Russian River Chamber of Commerce, reflected a similar sentiment in her statement: "While the flood is hard on so many, it is heartening to see how the community calmly comes together to help each other evacuate, move property, and adapt to the rising waters.

"We are all looking forward to the re-opening of businesses and homes as the waters recede later this week," she added.