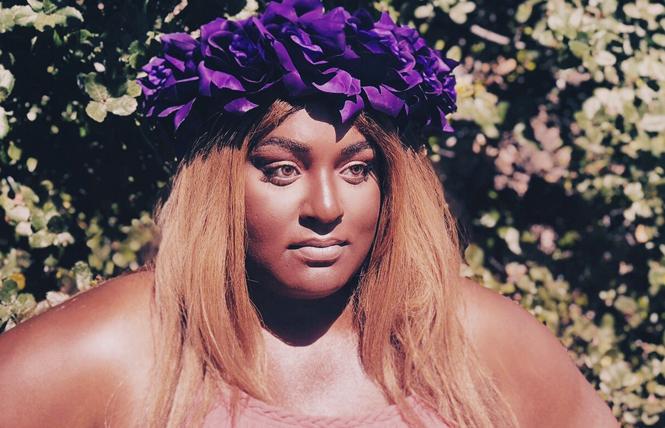 The Compton's Transgender Cultural District has a new executive director.

"I am just super honored and super excited," said Sa'id. "I'm so grateful for support from [the] community as well as the other co-founders of the cultural district ... [and] from Supervisor Matt Haney. I hope that I am able to do really great things through this role and this platform."

Sa'id, 29, will take over the position that was previously held by Mahogany.

Mahogany stepped down in mid-January after nearly two years at the helm when she became a legislative aide to Haney, the new District 6 supervisor.

During her tenure, Mahogany was able to secure permanent funding, negotiate with developers for a new community center, and open up new employment opportunities for transgender individuals, she said in a February 1 news release announcing the leadership change.

"I am certain that Aria Sa'id is the right person to take the reins," said Mahogany. "Aria is a brilliant creative force and an incredible leader. I can't wait to see the direction the district takes under her leadership."

Johnson, who heads the TGI Justice Project, said it was important to have someone in the position who understands the community.

"I've known Aria for a while and she does amazing work," she said in an interview with the Bay Area Reporter. "I feel very excited, Aria [will] take the district to another level."

Prior to leading the cultural district, Sa'id served as LGBT policy adviser for the San Francisco Human Rights Commission and director of programs and policy at the St. James Infirmary. She is an alum of the Women's Foundation of California's Women's Policy Institute, and one of the first transgender women of color to graduate from the program.

Sa'id is also the founder of Kween Culture Initiative, a program to promote equity for, and empower, transgender women of color.

The cultural district encompasses six blocks in the southeastern Tenderloin and crosses over Market Street to two blocks of 6th Street. In 2017, it became the first legally recognized district in the world dedicated to the transgender community, according to the release.

The heart of the district intersects at Compton's Cafeteria Way and Vikki Mar Lane, portions of Turk and Taylor streets that were renamed by the city in 2016.

The district is named after the former Gene Compton's Cafeteria, a 24-hour eatery that was located at 101 Taylor Street. One night in 1966, transgender patrons of the diner protested police harassment, three years before the Stonewall uprising in New York City.

The exact date has been lost to history, as the B.A.R. previously reported.

The cultural district's mission has been to create a hub of social, cultural, and economic opportunities for transgender and gender-nonconforming communities, according to the release.

It also aims to advocate for, and work toward, preventing displacement of transgender residents; address housing stability and employment disparities of transgender people of color; and address other issues affecting San Francisco's transgender community.

Haney, who represents the area of the cultural district, is fully behind Sa'id, he said in the release.

"The Compton's district speaks to the tremendous role that the transgender community has played in that movement, and to the many transgender people who continue to call this place home," he said. "Our office stands fully in support of the district's mission and its new executive director."

Her sights are set on San Francisco keeping transgender residents in the city and the Tenderloin neighborhood and creating opportunities for transgender San Franciscans.

Additionally, Sa'id hopes that the programs created by the cultural district will serve as a model.

"I'm excited to hopefully be able to create work with the district that can be replicated in other areas across the country that have had transgender cultural contributions like New Orleans, the site of Cooper Do-nuts Riot in Los Angeles, New York and so on," she said.