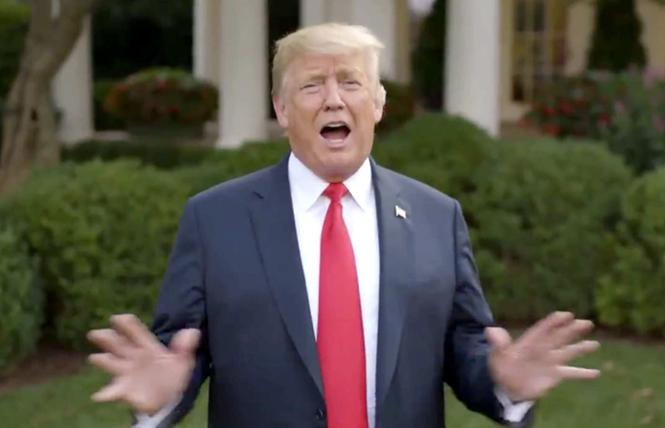 The U.S. Supreme Court on Tuesday granted the Trump administration's request to temporarily vacate two national injunctions that have prevented a ban on transgender people in the military from going into effect.

But the order denied the administration's request that the Supreme Court immediately take up the matter of whether President Donald Trump's proposed ban is constitutional, and some LGBT legal activists say an injunction in another case keeps the ban intact.

"As a practical matter, this is bad for transgender people currently in service," said Jennifer Levi, director of the Transgender Rights Project for GLBTQ Legal Advocates & Defenders. She said it "strengthens the government's position that it may be permitted to exclude people from serving," but she said the order is "very limited" and declined the Trump administration's request to have the high court hear arguments on the constitutionality of the ban itself before the litigation winds through the normal court process.

"This is a very narrow, limited ruling from the Supreme Court that allows the cases to proceed on the merits in the lower courts," said Levi. "We will keep fighting this ban in the courts below and believe that it ultimately will not be allowed to stand."

According to the Williams Institute at UCLA School of Law, there are an estimated 15,000 trans service members serving in the military, including 8,800 on active duty and 6,700 in the National Guard or Reserves. In addition, there are over 130,000 transgender veterans.

"The Supreme Court's decision to overturn a lower court injunction and allow President Trump's transgender ban to temporarily take effect, before hearing the case, is deeply disappointing," she said in a statement Tuesday. "This decision creates unnecessary confusion for transgender individuals serving in the military.

"The ban would essentially restore 'Don't Ask, Don't Tell' for transgender service members, only allowing them to serve if they hide their true identity," Feinstein added. "That previous policy directed toward LGBT service members harmed our military then, just as this one will now."

"The Trump administration's glaring efforts to deny protections to patriotic Americans seeking to serve our great nation in uniform are just plain wrong," Becerra said in a statement. "We will continue to fight to protect the rights of all Americans despite this president's disregard for equality and the rule of law. This is 2019, not 1920."

Tuesday's order affected three of the four lawsuits challenging Trump's proposed ban on transgender people in the military: Karnoski v. Trump, Stockman v. Trump, and Jane Doe v. Trump. Only two of those cases (Karnoski and Stockman) had injunctions in place against the ban. Both are pending argument before the 9th U.S. Circuit Court of Appeals.

The Supreme Court order did not affect an injunction granted in another fourth lawsuit, Stone v. Trump.

Shannon Minter, legal director for the National Center for Lesbian Rights, said, "The Stone injunction is still in place so the government cannot yet enforce the ban until it takes some further action to get out from under the Stone injunction."

There is some confusion on that last point. Numerous media reports said Tuesday's order sets the Trump administration free to implement its ban. Peter Renn, attorney for Lambda Legal Defense and Education Fund, which is representing service members in Karnoski v. Trump, said the order allows the Trump administration "to begin kicking openly transgender troops out of the armed services and to deny transgender people the opportunity to enlist."

But Renn acknowledged the order is "perplexing to say the least."

Renn said that, while Tuesday's order did not affect the Stone injunction, the U.S. Department of Justice will probably move very quickly to urge the district court in that case that it should stay its injunction now, too, given the Supreme Court's order.

GLAD's Levi said, "No one has a crystal ball to know what the district court will do in Stone." But she acknowledged that "it's fair to predict that, whenever the question gets back up to the Supreme Court on whether the injunction will stay in place while the challenge proceeds below on the merits, that the Supreme Court is likely to grant a stay in Stone as it did in Karnoski and Stockman."

NCLR and GLAD are representing numerous transgender service members in two of the cases involved Tuesday: Stockman v. Trump in Los Angeles, which is awaiting action by the 9th Circuit appeals court, and Jane Doe v. Trump in Washington, D.C., which is pending before the federal appeals court for D.C. The third lawsuit involved in the January 22 order is Karnoski v. Trump, another 9th Circuit case, led by Lambda Legal.

The Stone v. Trump case is being led by the American Civil Liberties Union on behalf of service members in Maryland and will eventually come before the 4th U.S. Circuit Court of Appeals.

The January 22 order from the Supreme Court indicated that the vote on the Karnoski and Stockman petitions had been 5-4, with Justices Ruth Bader Ginsburg, Stephen Breyer, Sonia Sotomayor, and Elena Kagan saying they would have denied the petitions.

LGBT legal groups had argued against the Trump administration petitions to vacate the injunctions, saying that it was too soon for the Supreme Court to become involved in the litigation. They noted that no federal appeals court had yet to rule on the constitutionality of the proposed ban or on the injunction against the ban. Three federal appeals courts made preliminary rulings that the injunctions could stand until a full hearing on their merits and the ban could be played out. The fourth case, Stone, is still before a district court.